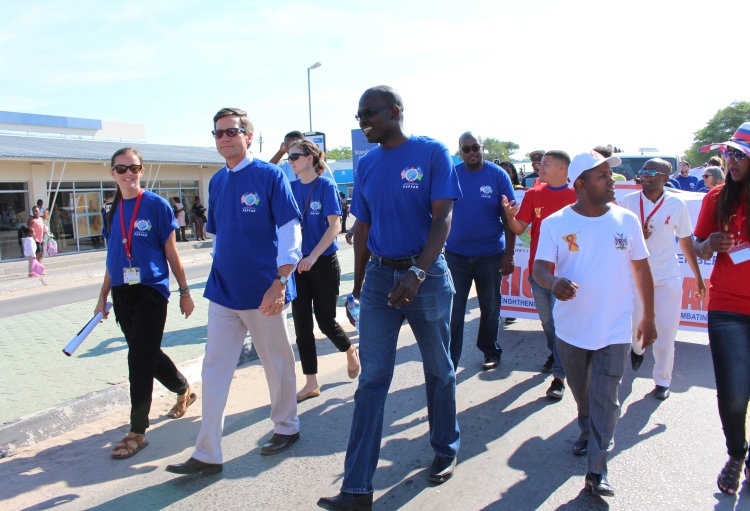 Good morning!  It is a great privilege and honor to be here with you today at the official commemoration of the 30th World AIDS Day.  I am especially honored because this is my fourth – but unfortunately last – World AIDS Day commemoration here in Namibia.  On this day, we remember those whose lives have been affected by HIV and AIDS.  We stand with those who have lost loved ones.  And we reaffirm our double commitment to prevent new infections and to save the lives of those infected with the virus.

The American government, through the U.S. President’s Emergency Plan for AIDS Relief, or PEPFAR, began its partnership with the Namibian government in the fight against HIV and AIDS in 2003.  At that time, more than 15,000 Namibians were getting infected with HIV every year.

Today, 14 years later, thanks to the hard work of our healthcare workers – health ministry officials, nurses, doctors, health extension workers, and community volunteers – the impact of the HIV virus has been greatly reduced. In that time, in partnership with PEPFAR and the Global Fund, the Namibian government has provided anti-retroviral treatment to HIV-positive Namibians and more than 150,000 lives have been saved.  Also in partnership with PEPFAR, Namibia has adopted a comprehensive prevention approach that includes promotion of condom use, HIV counselling and testing, prevention of mother-to-child transmission, Pre-Exposure Prophylaxis (PrEP), and voluntary medical male circumcision (VMMC).  Those prevention and treatment efforts have had a profound impact on the reach and effects of the disease in this country.

But even though Namibia has scored major successes in this fight, HIV/AIDS is still the number-one killer in the country – and it doesn’t have to be.  In 2017 alone, more than 3,200 Namibians will die from the effects of HIV and AIDS.  Most of those deaths will occur among men over 25.  Why?  Because many Namibian men who are infected with HIV don’t know their status and are not on treatment, so they die.  And in 2017 more than 6,000 Namibians will become infected with HIV.  Most of those new infections will be among young women.  Why?  Because those older men who don’t know their HIV status are having sexual relations with younger women, and infecting them in the process.  To control the HIV epidemic in Namibia, that cycle has to be broken.  The good news is that, thanks to the work of the Ministry of Health and Social Services, PEPFAR, UNAIDS, the Global Fund and other partners, the necessary tools are already in place to control HIV and prevent it from spreading further.  Namibia’s future starts by encouraging men to go and get tested for HIV, because people who get diagnosed early and are put on treatment can now go on to lead normal, healthy lives.

Through PEPFAR, we have supported a comprehensive health strategy that is specifically designed to address the challenges of providing HIV services in Namibia.  But this is a large and diverse country, and providing those services isn’t easy.  That’s why it’s fitting that we are observing World AIDS Day in Katima Mulilo today, because Zambezi region provides a clear illustration of some of the biggest challenges we face.  Due to many factors, including cultural practices, infrastructure, a dispersed population and poverty, this region has Namibia’s highest rate of HIV infection.  Providing HIV services in Zambezi has been made more difficult by the recent decision not to renew the contracts of foreign health workers.  There is no surplus of Namibians waiting to fill their jobs.  Foreign nurses are often the only people willing to serve in the challenging conditions of this region, which is why some clinics in Zambezi now have no staff.  In addition, despite PEPFAR’s attempts to help maximize efficient service delivery, some of the clinics in this region are having to deal with shortages of fundamental medical resources, such as test kits.

I raise these examples as a sobering reminder that, despite all our progress, much work remains to be done to control HIV in Namibia.  We shouldn’t make the struggle more difficult for ourselves.  But it’s also fitting that we’re in Katima Mulilo today because Zambezi region demonstrates how different aspects of support have been successfully implemented and integrated into the provision of broader health services.  Some of those successes include VMMC, community and facility HIV testing and treatment, and the opening of a lab that can perform viral load testing to monitor how patients respond to treatment.

Let me briefly speak about two specific examples. Through PEPFAR, the Ministry of Health and Social Services has started to implement community adherence clubs, one of which we visited yesterday right here in your region. Community adherence clubs are made up of HIV-positive Namibians who are medically stable and don’t need to visit a clinic regularly.  Instead, they can meet together and get their medication from a nurse designated to support the group.  At their meetings, the patients not only receive their medication, but also benefit from information sessions and, most important, from peer support.  Experience across southern Africa has shown that the combination of those factors – easy access to medication and information in a supportive environment – improves patient adherence to medication.  In other words, people in the clubs take their medications and stay healthy.  Even better, using community adherence clubs reduces crowding at clinics and hospitals, allowing those facilities to provide faster and better service to those who need it urgently.

Another PEPFAR program that supports Namibian communities is the Extension for Community Healthcare Outcomes, or ECHO, project, which aims to provide information and support to healthcare providers.  I was lucky enough to be present for the launch of Project Echo in Namibia, so I particularly pleased to be here today to see Project Echo get integrated into the Ministry’s training systems.  Thanks to Project ECHO, doctors and nurses no longer have to take the time and expense to travel to Windhoek to attend meetings about specific health subjects.  Instead, the Ministry now has video conferencing facilities that empower healthcare providers to stay in touch, share critical information, and even instruct each other – all from their posts in the field. This, ladies and gentleman, is just another example of how the Ministry of Health with support from PEPFAR is working on innovative approaches that will assist in conquering HIV in Namibia. And I take comfort from knowing that, although I will be leaving Namibia in just a few weeks, I can always call in to one of the ECHO sessions to check on how things are going!

Namibia’s progress toward achieving the UNAIDS 90-90-90 targets has been remarkable, but we’re not there yet.  Reaching 90-90-90 means working even harder to reach the people in the community who are at the highest risk.  And while I am proud that my country has been a major investor in Namibian lives for more than a decade, no amount of money will stop new infections or end people dying from HIV and AIDS if the people affected don’t access the health services provided to them.

We need you all to work with us.  Get tested, and encourage your partners to get tested.  If you test positive, get on treatment straight away and go for regular checkups to make sure the virus stays suppressed in your body.  When you are virally suppressed, your chances of transmitting the virus to another person drop dramatically.  Young men need to get circumcised, because studies have shown that when you are circumcised, your chances of contracting HIV are reduced by nearly two-thirds.  To older men who don’t know their HIV status yet, I say: Namibia is known as the Land of the Brave.  So demonstrate your bravery!  Go out there, get tested, and know your status!  And for young women who aren’t infected but feel that you are at risk of contracting HIV, the latest tool in the fight against HIV is available to you now.  You can visit a facility like the NAPPA clinic right here in Katima Mulilo and talk to them about Pre-Exposure Prophylaxis, or PrEP.  The PrEP medication is free of charge and can protect you from contracting HIV.  And taking it also means that you are taking control of your life by protecting yourself.

Ladies and gentlemen, as my time as the American ambassador in Namibia comes to an end, I want to encourage you all to continue fighting HIV by seeking out the services that have been made available to you.  To the healthcare workers, let me say thank you for your hard work day in and day out. You are truly on the front lines, making a difference in your communities by helping the Namibian nation stay healthy.  To my friends and colleagues at the Ministry of Health and Social Services, as we celebrate our shared progress in fighting the epidemic, let’s continue to come up with innovative ideas to reach – and ultimately exceed – the UNAIDS 90-90-90 targets, and let’s do it by making smart investments that will allow the Namibian government to sustain the progress we’ve made together into the future.

In the end, the most important part of the equation is people.  Over the last 14 years, PEPFAR in Namibia has built its strategy around people.  Working with the Ministry of Health and Social Services, we have focused on bringing HIV testing and treatment services closer to communities – closer to the people who need them.  Let’s continue working with the same zeal, focus and tenacity, as we save the lives of the people of this beautiful country.