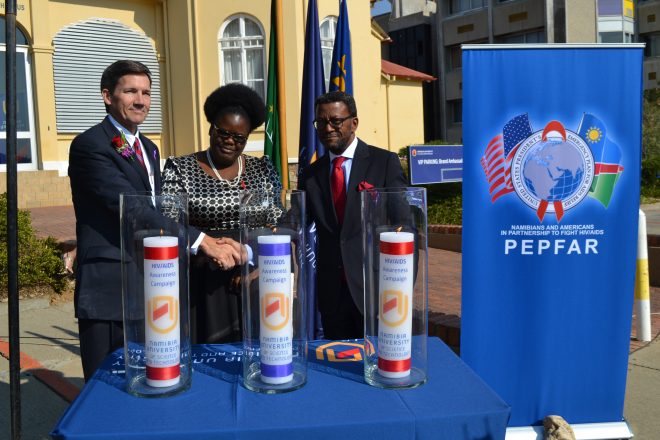 Good morning! It is a real pleasure for me to be here today to join you for the 20th HIV/AIDS Awareness Campaign. The Namibia University of Science and Technology is at the forefront of shaping the young people of this country into the Namibian leaders of tomorrow. As I am sure they are teaching you here at NUST, one of the things you have to learn to become one of tomorrow’s leaders is how to lead a long, healthy and productive life. The United States has a longstanding commitment to help the people of Namibia lead healthy lives, particularly with respect to HIV and AIDS. That is why the U.S. government is happy to support this year’s HIV/AIDS awareness week, because we believe, as President Hage Geingob has said, that “no one should be left behind” in this fight.

I know it might seem like you’re invincible in your youth, but as someone who is not so young anymore, I can tell you that it’s not necessarily the case. To live a healthy life you need to keep certain risk factors in mind. For example, recent studies show that the highest proportion of new HIV infections are among young men and women between the ages of 15 and 24. I’d guess that most of you here today fall within that age range. Am I wrong? The fact that you are here today tells me that you have already committed to invest in yourself and your future. For that investment to pay off, you also have to invest in protecting your health. That includes taking precautions to make sure you don’t become HIV-positive, or, if you’re already positive, knowing your status and taking medication.

The United States has been working with the Namibian government for more than a decade to fight HIV and AIDS. These days, our joint fight has reached the point where we’re talking about actually achieving the UNAIDS 90-90-90 targets. What that means is identifying 90% of all people who are HIV positive, getting 90% of them on lifesaving ART, and making sure that the burden of virus in 90% of people on treatment is fully suppressed, in other words, fully under control. If Namibia can reach the 90-90-90 targets by the year 2020, UNAIDS estimates that the number of new HIV infections will decrease by 90% and the number of deaths from HIV/AIDS will drop by 80%.

But don’t try to remember all of the statistics. For us to achieve this target together, you need to remember the three T’s: we need to Test people so they know their HIV status; we need to Treat the virus in people who are positive with medication; and then we need to Test them again to make sure the medicine is keeping the virus in their bodies fully under control. It’s pretty simple. Three T’s. Test, treat and test again.

It’s your choice and your responsibility to prevent infection. And you may not realize it, but what you do today plays a big role in whether Namibia achieves an AIDS-free generation. Your children could be the first ones to live in an AIDS-free Namibia. Whether they do will be based in part on the informed decisions you make now. I want you to go home and tell your friends and family.

In this awareness week, I want to mention another informed decision, in this case by the Namibian singer, The Dogg. As some of you may know, the honorable health minister, Dr. Haufiku, has agreed to give The Dogg the “smart cut” on September 19. In case you’re wondering what that is, doctors call it voluntary medical male circumcision, or VMMC. Why has The Dogg agreed to it? Because the “smart cut” is proven to reduce the risk of contracting HIV by 60%. As I’m sure you can agree, it’s a bold move for The Dogg – and for Dr. Haufiku, too – to raise VMMC awareness. The VMMC program is also something the U.S. has been supporting, and I think The Dogg’s decision is a point worth emphasizing during awareness week.

Finally, I want to commend NUST for including cancer in this year’s awareness week. Cancer is a disease that also affects people infected with HIV — but its connection to HIV is not always understood. Because of that connection, the U.S government is also contributing to the development of Namibia’s National Cancer Prevention Control Policy, which we hope will be released in the coming months.

And next year we will be supporting the health ministry in addressing cervical cancer screening and prevention for HIV-positive women.

As young people and future leaders of Namibia, I want you to remember that all of the American support and all of the health ministry’s many efforts will not succeed without you. Namibia has the opportunity to become the first African country to realize an AIDS-free generation. Let’s work together to make it happen. Together we can.