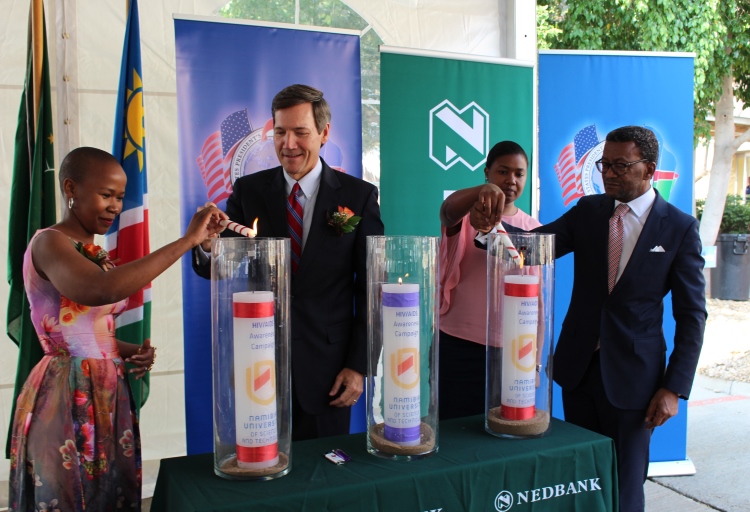 Good morning!  It is a real pleasure for me to be here again today to help commemorate the second HIV/AIDS awareness week at the Namibia University of Science and Technology.  I’m particularly pleased that the theme for this year’s awareness week is “the change is in your hands” because that theme contains an important message.  It’s important because it emphasizes the central role that each of you personally plays in the fight against HIV and AIDS in Namibia.

Did you know that HIV and its associated diseases are still the number-one killer of Namibians?  And you know what’s worse?  It doesn’t have to be that way.  In the 30 years since HIV became a reality here and around the world, we have learned that if people who are infected with HIV are diagnosed and put on treatment early in the infection, they can go on and have a normal life expectancy. In other words, they can live a normal life.  But you have to know that you’re infected and get on treatment early.  So my main message for you today is a simple one:  Get tested for HIV.  Make it part of your general health maintenance.  When you know your HIV status, you can treatment and live a normal, healthy life.  It is that easy.  Just remember the three T’s: “Test” for HIV, get “Treated” and routinely “Test” again to make sure the virus remains under control in your body.  When the virus is asleep, or as the doctors say, when you are “virally suppressed”, your chances of transmitting HIV to another person are almost zero.

Because of what we’ve learned in the fight against HIV, and because of the medical advancements that have been made in fighting the disease, all of you are poised to be part of Namibia’s first AIDS-free generation in decades.  But as the theme says, “The change is in your hands.”  As individuals and as members of larger communities, we all have a personal and a shared responsibility to develop the healthy behavior that will end the AIDS epidemic and secure Namibia’s future as a healthy nation.

For more than 13 years, the close partnership between the U.S. President’s Emergency Plan for AIDS Relief, or PEPFAR, and the Ministry of Health and Social Services has demonstrated my country’s commitment to Namibia and belief in Namibia’s ability to achieve its goal of controlling the HIV epidemic.

But controlling this epidemic is not just about achieving an AIDS-free generation.  That’s the overarching goal, but it has a couple of key components.  One of those is empowering women as future leaders.  It’s estimated that every year around the world, almost 400,000 adolescent girls and young women are being infected with HIV, and 75% of those new infections occur in sub-Saharan Africa.

I want to talk to the young women here today.  How many of you are over 14 years old?  If you fall in that age bracket, you are the future leaders of Namibia.  With more than 40% of its parliamentary seats held by women, Namibia is already a world leader when it comes to women in politics.  Your presence here today demonstrates your commitment to protecting yourselves and equipping yourselves with knowledge.  Your presence also demonstrates your potential as leaders.  Just like this country’s First Lady, Monica Geingos, in her role as a UNAIDS Special Advocate for Young Women and Adolescent Girls, you can help make Namibia a global leader on women’s health, including in the fight against HIV.

If Namibia is to win its fight against HIV and achieve that AIDS-free generation, young women must remain HIV-negative through a holistic approach that includes staying in school, learning about the risks of HIV and how it is transmitted, and being empowered to make informed, healthy choices.  For women, that means having smart sex by insisting on condom use, knowing your status and the status of your partner, and encouraging your partner to get tested.

But women are half of the equation.  Men have an equally important role to play.  Unlocking epidemic control in Namibia is, in fact, in the hands of Namibian men.  Through extensive research here in recent years, we have learned that there is a cycle of transmission in Namibia that must be stopped in order to control the HIV epidemic.  How does that cycle work?  When older men who are HIV-positive but do not know their status have sex with younger women, they infect them.  When those women eventually have relationships with younger men their own age, the younger men become infected.  And as those young men get older, the cycle starts all over again.

Data tells us that over 75% of HIV-positive people in Namibia today are already on treatment.  That means many people are already getting tested for HIV, and that is definitely good news.  But, the same data shows that the percentage of HIV-positive men who are on treatment is much lower – only 55%.  Why?  Because Namibian men – particularly young men – don’t go to the doctor.  They aren’t actively seeking medical attention unless they have to go to the emergency room for a broken bone or other similar urgent medical need.

We say that Namibia is the land of the brave, but it shouldn’t just be the land of the brave women.  Men, be brave: go get tested for HIV, know your status and the status of your partner, get on treatment if needed, use a condom, and get circumcised.  That’s what you have to do to break the cycle and end the spread of HIV in Namibia.

As young men and women and future leaders of Namibia, I want you to remember that all of the American support and all of the health ministry’s many efforts will not succeed without you.  Namibia has the opportunity to become the first African country to realize an AIDS-free generation, and the change is in your hands.  Let’s work together to make it happen.  Thank you!