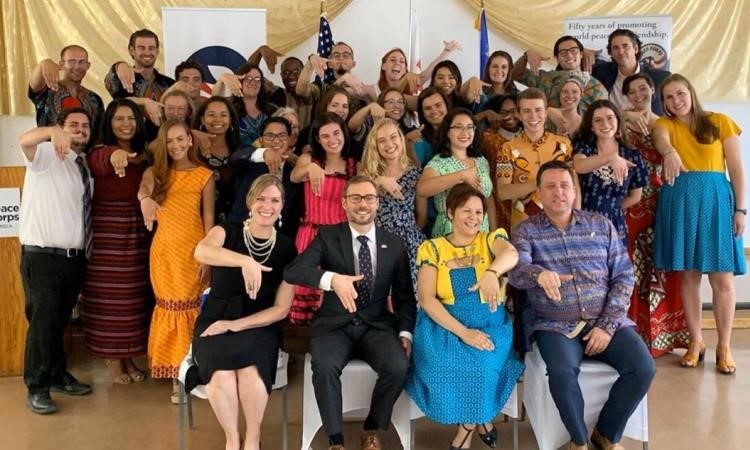 The group of 30 new U.S. Peace Corps volunteers who joined local communities throughout Namibia last week at the swearing-in ceremony in Okahandja as Group 50.

Okahandja – 30 new U.S. Peace Corps volunteers joined local communities throughout Namibia last week to begin two-year assignments to strengthen education across the country.  The 30 volunteers will work shoulder-to-shoulder with local communities and schools in all 14 regions for the next 24 months.

The Peace Corps is a volunteer program of the United States government in which American volunteers, young and old, work without pay overseas for two years to help a country build its capacity to meet the needs of its people.  The Mission of the Peace Corps is “To promote world peace and friendship.”

The newest group of 30 officially became Peace Corps volunteers at a swearing-in ceremony Thursday, October 17 at the Andreas Kukuri Center in Okahandja.  At the ceremony, the U.S. Embassy’s Chargé d’Affaires Peter Lord described the Peace Corps program as “one of the strongest pillars of friendship between America and Namibia.”

Before taking up their assignments throughout Namibia, the 30 new volunteers participated in a nine-week cross cultural training program in Okahandja. The training involved proficiency in one of nine local languages, as well as living with host families in Okahandja.  This complete immersion into Namibian culture and language prepared the volunteers to work at the community level across Namibia.  At the conclusion of the nine-week training, Peace Corps Country Director Kevin Fleming thanked the government and people of Okahandja for years of generosity and support for the program.

The Peace Corps has brought volunteers to Namibia since its independence in 1990.  Since then, over 1,800 Americans have volunteered for two years in Namibia on projects from health, education and community economic development, to cultural preservation.