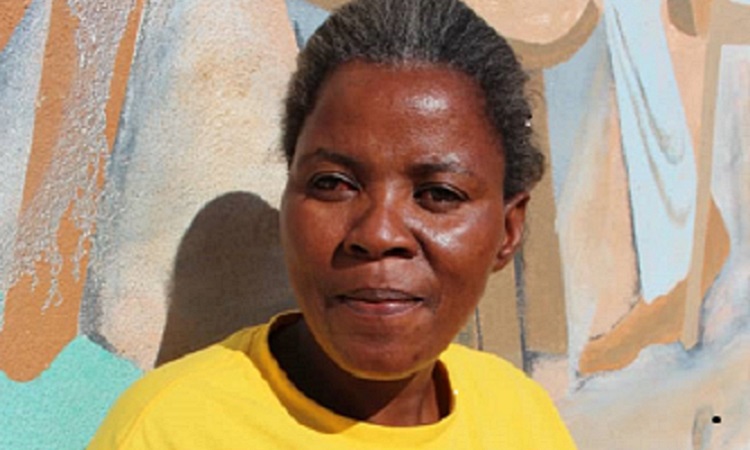 Sentia Soroses, a member of the Community Adherence Groups.

The air was dry, the cloudless sky blue, and the road dusty in the quiet sleepy town of Outjo. With the sun shining mercilessly, hot air blew through the community hall’s windows and wide-open doors on the side and back of the hall.  In this hall situated in Damara location was a sea of yellow t-shirts, with big red squares at the front with the words, “TCE” in bold white letters and “passion for people” at the bottom in the same color.

The over 30 community members wearing these t-shirts all have one thing in common. They are all living with HIV and are members of care and treatment groups called  or CAGs. “This group is united and it brings people together. It just makes life easier for us,” said a vibrant Sentia Soroses, who found out she was HIV positive in 2004.

Based on the Ministry of Health and Social Services (MoHSS) national treatment guidelines, Community Adherence Groups (CAGs) are open to any HIV positive patient who is stable on treatment and would like to be part of a group. CAGs provide much needed support to HIV positive community members.

CAGs are one of the Differentiated Services Delivery models that the MoHSS offers to support their goal of providing patient-centered care.  Groups are comprised of six to twelve stable patients who receive their life-saving anti-retroviral (ARV) drugs in their community, much closer to their homes than most health facilities.  CAGs also provide a platform for adherence counselling and support groups. Though medication is still dispensed from the local health facility, only one member of the CAG travels to the clinic or health center to collect the ARVs for all group members. The remaining CAG members can continue about their day and simply collect their medication when they meet as a club once every three months.  At each gathering, all CAG members also complete a basic wellness screening.

Sentia and her husband are both members of the CAG and actively participate in informing fellow community members about HIV. “I have been living with this virus for close to 20 years now, and I tell people to not be shy because it is your life. I also speak to pregnant women to get on treatment to protect their unborn babies. I tell them to not be ashamed and to follow me,” says Sentia. “HIV was like a death sentence. Now, with our bright t-shirts, we are not silent. We are busy talking about HIV.”

In the community hall, Sentia speaks about how a visit to the clinic in the morning would often last until 14h00 in the afternoon. “We would fight over who came first and abuse each other in the queue. With the CAG, people can actually rest knowing that someone is collecting their tablets for them.”

CAGs are run by the Ministry of Health and Social Services and are supported by the United States President’s Emergency Plan for AIDS Relief (PEPFAR), through the U.S. Centers for Disease Control and Prevention (CDC). Over the last two years, the model has expanded to more regions and health facilities across the country.  As of the end of September 2021, more than 16,000 people were enrolled in more than 2,000 CAGs across nine regions in Namibia. The U.S. Embassy Chargé d’Affaires Jess Long met with CAG participants in Outjo when she traveled to the region for World AIDS Day.

“When we listened to everyone’s voice, we learned that people living in rural communities needed easier access to medication and together with the MoHSS, PEPFAR supported the establishment of CAGs. This is a good example of how Namibian officials, civil society organizations, and the PEPFAR program are advancing equity in healthcare to achieve our goals,” said Chargé Long.

Sentia also shares her story through speaking engagements at schools and in the community at various events. “People were dying because they were silent. There was a need and I just had to do something,” she said about her decision to become an HIV advocate. “We are also thankful for the science because previously, I had to take six tablets. Now, I only take two.” This is because Namibia, with support from stakeholders such as PEPFAR, continually updates its treatment guidelines to ensure that people living with HIV in the country can receive the latest medicines which require people to take fewer tablets per day.

“It is this strong partnership that has ensured that we all work together to achieve a common goal, which is to ensure the health of Namibian people,” said Chargé Long.