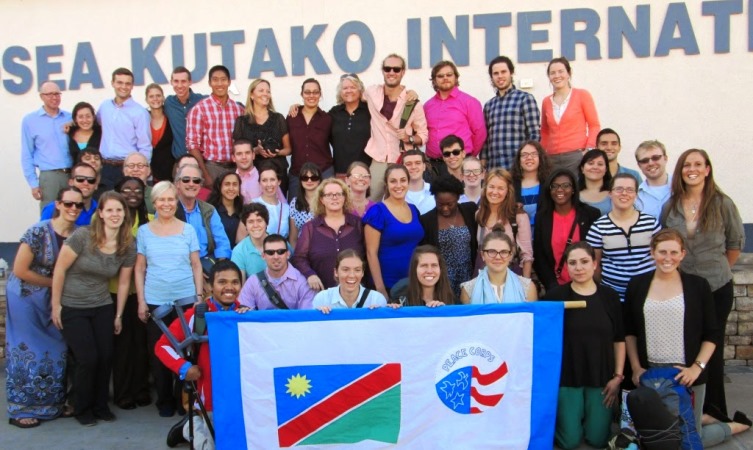 From February 26 – March 4, 2017, Peace Corps Week commemorates President Kennedy’s establishment of the Peace Corps on March 1, 1961 (more information below). During this annual event, the Peace Corps community celebrates all the ways that Peace Corps makes a difference at home and abroad and renews its commitment to service.

I think this is an important story, a part of history, that needs to be told. In late 1989 Director of the Peace Corps Paul Coverdell and me started discussing the possibility and the importance of a Peace Corps program in what would be the new country of Namibia.

The concern he had, rightfully so, was that due to the war in Angola and landmines placed in the northern area along the river, that Volunteers would not be safe. Since I had been in the area several times and had seen hundreds of local Namibians safely walking around, I jokingly made a pact with Director Coverdell. I told him I would go to the area and if I called him back, everything would be a go; however, if I did not, there would not be an entry. We laughed, knowing I would be safe. The Director authorized me to begin having discussions with the soon to be government of Namibia and to gauge their interest. Once those discussions started, it was clear they not only wanted the Peace Corps, but would enthusiastically welcome them.

We then started discussions about where the Peace Corps Volunteers (PCVs) could best serve and it was determined the greatest need was at the Teachers Training facility at Katima Mulilo and along the Caprive Strip to Rundu. When Director Coverdell and then Chief of Staff Jody Olsen were convinced the PCVs would be safe, he gave a thumbs up for an entry. One week after independence on March 21, 1990, I met with Minister of Education Nahas Angula (later to be Prime Minister) and he said while they wanted Peace Corps, they were so new they did not have any government letterhead to issue a formal request. I told him about the Gettysburg Address and said we did not need a formal letterhead … the request would serve that purpose. Immediately, he pulled a blank sheet of paper from his desk drawer and dictated to his assistant a request for the Peace Corps to enter Namibia.

That request on a blank sheet of paper set in motion the selection and arrival of the first group of PCVs into Namibia and it is now part of the Peace Corps exhibit at the Smithsonian. Later, in another article, more on the selection, arrival (hint: a special dinner at the State House) and the achievements in Namibia of the first group of Volunteers.

The program in Namibia continues to thrive and there are so many to thank, in particular, the first group of Volunteers, plus the wonderful staff that made it all happen. Staff included our beloved Hope Phillips (who has now passed away), Tim Olsen (now Dr. Olsen), Kim Ward, Judy Baskey, Nurse Clara Donkor, and so many others. In fact, all of the Peace Corps Botswana staff should be thanked because it was their diligent and compassionate work that allowed the Peace Corps/Namibia program to open. I also specifically mention Steven Gibson, Mary Lanning, and Deborah Cottrell and all of our local staff. Sure miss Mercy.

On this day in 1961, President John F. Kennedy issued an executive order establishing the Peace Corps. In September, the Democratic-led Congress backed Kennedy’s initiative by providing $40 million — about $1.2 billion in today’s dollars — as an initial annual appropriation. During the 1960 presidential campaign, Kennedy had suggested that the United States should create a new “army.” This force would be made up of civilians who would volunteer their time and skills to help underdeveloped nations raise their living standards.

In a message to Congress, Kennedy wrote that the people of these nations are “struggling for economic and social progress.” “Our own freedom,” he continued, “and the future of freedom around the world, depend, in a very real sense, on their ability to build growing and independent nations where men can live in dignity, liberated from the bonds of hunger, ignorance and poverty.”

At the time, post-colonial conflicts were breaking out in Africa and Southeast Asia. The administration warned the lawmakers that some of them — in Laos, the Congo and elsewhere— could become Cold War battlefields. During the 1960s and 1970s, thousands of Americans — particularly young people — served in dozens of nations in Latin America, Africa, Asia and the Middle East. Peace Corps volunteers helped build sewer and water systems; constructed and taught in schools and assisted in developing new crops and agricultural methods to raise productivity. At first, Congress was dubious. Rep. H.R. Gross (R-Iowa) branded the concept a “utopian brainstorm” that would aggravate the federal deficit.

In response, Rep. Marguerite Stitt Church (R-Ill.) — who had traveled widely in sub-Saharan Africa — entered the well of the House to recount her trips abroad where she had seen foreign-aid dollars misspent and misdirected in the battle for the developing world.

Here is something that is aimed right, Church said, “which is American, which is sacrificial — and which, above all, can somehow carry at the human level, to the people of the world, what they need to know; what it is to be free; what it is to have a next step and be able to take it; what it is to have something to look forward to, in an increase of human dignity and confidence.” Rep. Catherine May (R-Wash.) recalled that Church’s remarks proved critical in persuading some reluctant Republicans to support the measure. “You quite literally could see people who had been uncertain or perhaps who had already decided to vote against the Peace Corps sit there, listen to her very quietly and start to rethink,” she said, before the House approved the bill in a 288-97 vote.