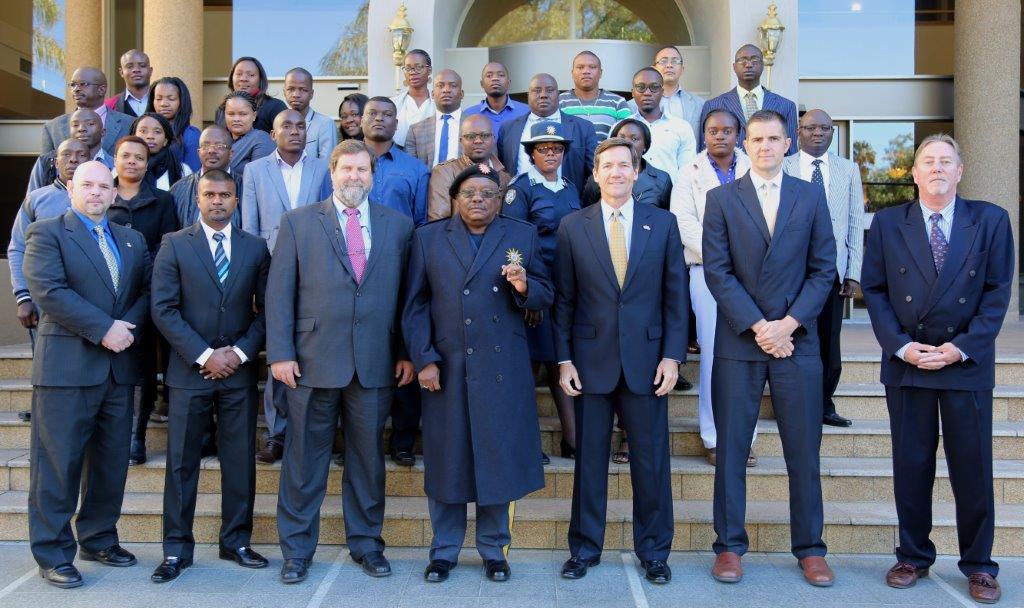 Good morning.  I am honored to be here today to mark the opening of the U.S. Department of Homeland Security’s Cyber Crime Investigations Training.  I want to start by recognizing and thanking Inspector General Sebastian Ndeitunga for allowing this collaborative training to take place.  I also want to recognize and thank Steve Martin, Homeland Security Investigation Attaché at the American Embassy in Pretoria, for coordinating these training efforts.  And lastly, I would like to acknowledge and recognize Brigadier Anuben Naidoo of the South African Police Services and Executive Director of Interpol National Central Bureau for Africa, for attending this training to show the importance of regional and global cooperation.

In just the time I have spent speaking this morning, an estimated 45 people around the world have become victims of cybercrime.  That translates into one-and-a-half million people per day, or 556 million people per year, who are the victims of cyber thefts.  That gives you an idea of how widespread cybercrime has become worldwide.  McAfee – one of the world’s leading cyber security firms (one that happens to be an American firm) – estimates that the annual global cost of cybercrime is around 400 billion US Dollars.  In 2014 in the United States alone, 47 percent – nearly half – of all American adults had personal information stolen by hackers.  Also in the United States, 7 percent of all U.S. organizations reported losing more than US$1 million as a result of cybercrime and an additional 19 percent reported losing US$50,000 or more.

The sad reality of the situation is that, according to a United Nations study, you are now more likely to have your e-mail account hacked or your identity stolen than your own home broken into.  One big problem with cybercrime is that a majority of the crimes go unreported.  A recent study reported that up to 80 percent of all cybercrimes go unreported due to lack of awareness of the crime, the inability to report it, embarrassment on the part of the victim, or fear of consumer backlash on the part of an affected business.  What this tells me is that our law enforcement agencies need to be finding new ways to protect our citizens from cybercrime.

Sitting here today, you might be asking yourself, how does this affect me in Namibia?  You may be thinking cybercrime is only a problem in the United States.  But just a couple of weeks ago it was widely reported in the press that Namibia is now the top destination in Africa for cybercrime due to the excellent and relatively inexpensive communications network here.  Another contributing factor to this ranking is Namibia’s thriving international banking sector, which allows money to flow in and out of Namibia with relative ease.  These advantages in Namibia are great for consumers, but they are also ripe for exploitation by cybercriminals.  And  cybercriminals have no respect for the rule of law or for international borders.  They don’t even have to be physically present in the country to commit a crime.  Because of the ease of accessing information in a country like Namibia, a cybercriminal can be standing on a street corner in France, or lounging at an Internet café in Nigeria, or sitting in a basement in the United States while stealing money or information from an organization or an individual in Namibia.  According to Garth Kleintjies, chief information officer at FNB Namibia, “Joint agreements with other governments will have to be put in place as cyber criminals operate without borders and this in itself is the biggest challenge in bringing them to justice.”

My goal providing these sobering statistics on cybercrime is not to discourage you, but rather to motivate you as law enforcement officers.  We are here today to think outside the box.  To learn new ways to fight criminals.  To adapt to their ever-changing techniques.  These criminals may look different than traditional bank robbers or thieves, but they have the same goal in mind:  to take someone else’s money, property or information for their own gain.  As law enforcement officers, I know that one of your basic goals is to protect innocent citizens.  And whether we like it or not, more and more frequently, these innocent citizens are victims of cybercrime.

United States Attorney General Loretta Lynch recently commented that, “As we venture further into the digital age, the questions we grapple with will only become more difficult, more intricate, and more intertwined.  In order to surmount the obstacles we will surely encounter, we don’t necessarily have to be locked in perpetual and perfect agreement – but we do have to be engaged in open dialogue, so that we can draw upon each other’s resources, hear each other’s concerns, and learn from each other’s perspectives.  That’s how we spur new ideas, forge better solutions, and find the way forward.  That’s how we strengthen our defenses, prevent damaging crimes, and bring wrongdoers to justice”.

The U.S. government realizes that this is not a fight that law enforcement agencies around the world can take on alone.  The only way to win the fight is in partnership with other governments and private entities.  Too often, transnational criminal organizations have used the gaps between us to exploit our weaknesses.  That is why we have brought experts from the U.S. Department of Homeland Security here to enhance Namibia’s ability to battle transnational criminal organizations in the cyber arena.  The ultimate goal of this training is to build upon the existing relationship between U.S. and Namibian law enforcement to help improve our collective capacity to eliminate transnational criminal threats.

For that reason, I hope this won’t be a one-time linking of Homeland Security Investigations with Namibia, but the first step toward a productive partnership.  I know Homeland Security Investigations is closely working with Interpol to establish an annual regional conference to discuss new cybersecurity trends.  This approach – of regional cooperation – should build a strong foundation in the fight against transnational cybercrime.  I hope to see our Department of Homeland Security colleagues return in the future for additional interaction with our Namibian colleagues.  The strengthening of the bonds between U.S. and Namibian law enforcement makes it more difficult for criminals to thrive.  Simply through your presence here today, those bonds are stronger.

Thank you all for attending this training, and thank you for your service in the protection of our citizens.