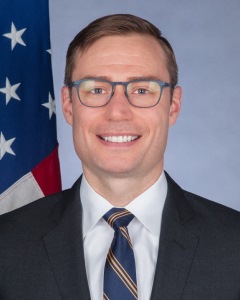 Peter Lord joined Embassy Windhoek as the Deputy Chief of Mission in July 2017.  Prior to his arrival in Namibia, he served as the Deputy Director and then Acting Director of the Office of East African Affairs.  From 2014-2015, he was the Kathryn and Shelby Cullom Davis Foreign Service Fellow, serving as an adjunct professor and research fellow at Columbia University.  He was a Political Counselor at the U.S. Mission to the United Nations, where he led the team covering Africa and Europe on the UN Security Council from 2012-2014.  He served as the Deputy Chief of Mission at the U.S. Mission to the African Union in 2010-2012.  Previously, he has had diplomatic assignments in Malawi, Syria, Iraq, and the United Kingdom.