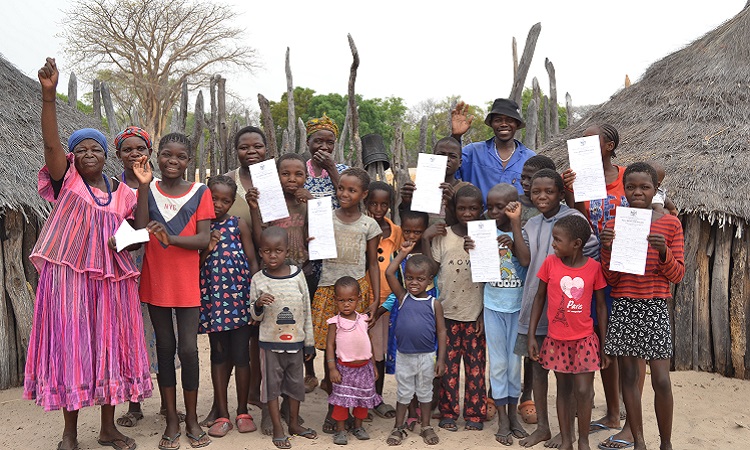 Meekulu Anastasia (left) and her family, including seven grandchildren who already received their Namibian birth certificates with support from the U.S. Government.

It is yet another scorching hot day in Eenhana, the capital of northern Namibia’s Ohangwena Region. Dozens of people are convened under the cover of a tree for respite. Like many others present, the Hafunda family travelled 25 kilometres to Eenhana from their home in Oshikonda Village with one goal in mind – to finally acquire birth certificates for their children.

Up until this moment, 15 of the 21 members of the Hafunda household had never been issued formal birth certificates. Living without them meant that many public services were simply inaccessible, a challenge only exacerbated by the family’s daily responsibilities tending their farm in a remote village far from public service providers.

Unfortunately, similar experiences ring true for the estimated ten percent of Namibians who are undocumented. But thanks to a collaboration launched in August 2022 between the Ministry of Home Affairs, the U.S. government via the United States Agency of International Development (USAID) and its implementing partner, Project HOPE Namibia, these many families, like the Hafundas, are now able to obtain birth certificates quickly and easily at selected mobile processing points.

“I learned about the registration campaign through our community care worker, Natalia. She also indicated that transport to the registration centre in Eenhana would be provided,” recalls ‘Meekulu’ (which means grandma) Anastasia Hafunda. “I was dismayed when two of my grandchildren were unable to enrol in school because they did not have birth certificates. I, therefore, felt a sense of duty to ensure that they did not endure a similar fate elsewhere. We are very happy to have benefitted from this initiative. Previously, none of the children had birth certificates, making it difficult for them to be officially part of our society or to apply for social grants,” she adds.

On a recent visit by Project HOPE to Oshikonda, the jubilant mood in the Hafunda traditional homestead is palpable. Meekulu Anastasia, flanked by inquisitive toddlers, flips through a folder of documents. One-by-one, she excitedly reveals its precious content – birth certificates for seven of her grandchildren. She conveys that eight more are currently being processed by the Ministry of Home Affairs and will be issued soon.

The family solely relied on Meekulu Anastasia’s meagre monthly pension to meet their basic needs. But with the children now eligible for social grants, their household income has increased significantly. “I can finally breathe a sigh of relief knowing that my grandchildren will not go to bed on an empty stomach,” she says.

The civil registration campaign has so far issued identification cards and birth certificates to about 700 previously undocumented Namibians in the Oshikoto, Ohangwena, and Khomas regions – the majority of whom are orphans and vulnerable children enrolled in Project HOPE’s Namibia Adherence and Retention Project (NARP). The campaign will be expanded to five more regions in 2023: Zambezi, Oshana, Omusati, and Kavango East and West.

Funded by the U.S. President’s Emergency Plan for AIDS Relief (PEPFAR) through USAID, NARP has supported more than 100,000 vulnerable young Namibians since its inception ten years ago.