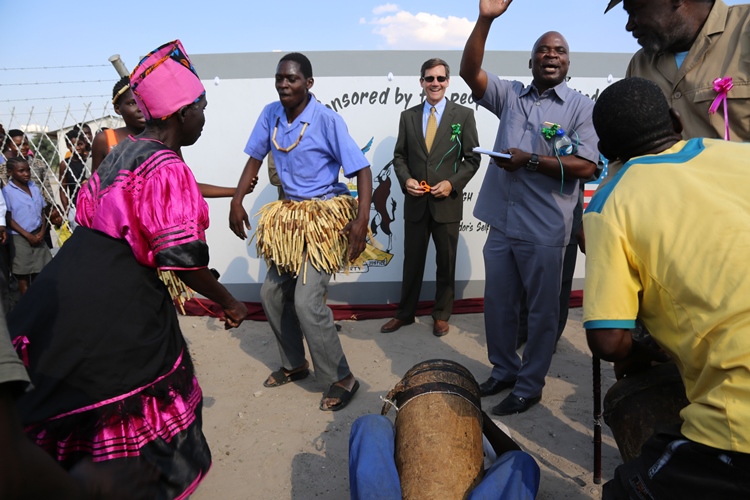 Good afternoon!  Thank you all for joining us today for the official handover of the new Linyanti Combined School fence.  This fence project was one of six initiatives from across Namibia that were supported by the American Embassy during the past year through what we call the Ambassador’s Special Self-Help Fund.  As its name suggests, the Self-Help Fund is a grassroots assistance program that enables Ambassadors like me to respond quickly and directly to requests for assistance with community-based development projects that promise to have immediate and visible impact on their communities.

During the last year, the American Embassy in Windhoek received almost 300 applications for assistance through the Self-Help fund.  Of those, we were only able to fund six projects.  The Linyanti Combined School was one of the six.  In other words, this project was exceptional.  I want to commend Mr. Edward Mutaba, Mr. Michael Chalo Otela, and the other members of the school board for playing a key leadership role in this project.  As a result of their determination, this community has become a better and safer place to live, attend school and work.  Learners no longer have to worry about threats from robbers or livestock passing through an area where the learners are supposed to feel safe.  For their part, school officials can feel at ease knowing that their learners are no longer threatened by speeding automobiles when a ball crosses the road.

Let me give you an idea of what some of the other successful Self-Help projects were this past year.  In Kavango, we supported a computer literacy lab for young people. We funded a solar jar project in the Khomas region so that young learners can study in their homes without the risk of shack fires. In Hardap, an afterschool care program was expanded for at-risk children.  And in Omaheke region, we supported introduction of a self-sustaining livestock distribution program.  All of these projects – here at Linyanti and across the country – share something in common:  they have empowered Namibians to find Namibian solutions to Namibian challenges.  That ultimately is the goal of the program and, I think, the goal of the people and the communities that are affected.  My colleagues at the U.S. Embassy and I are proud that we can be part of the ongoing effort of Namibians to help each other for the long term benefit of all.

I would like to take this opportunity congratulate not only the principal and board members of the Linyanti Combined School who are here today, but to all of you who have worked to improve your lives and the lives of your families.  Each of you has demonstrated resolve and commitment, and I salute you for having the courage to pursue and realize your goals.

Let me conclude my remarks with some words of encouragement to the learners.  When President Barack Obama visited Ghana in 2009, he gave a speech to all Africans in which he said, “It will be the young people, brimming with talent and energy and hope, who can claim the future that so many in previous generations never realized.”  President Obama was talking about young people like the learners at the Linyanti Combined School.  You are the leaders of tomorrow. You have a fresh start in a safer environment.  I hope you will take full advantage of it.