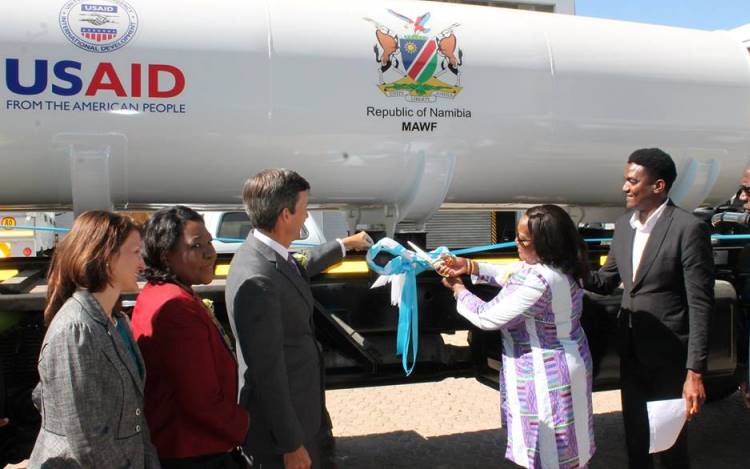 They say that water is life, and no one knows that better than the people of Namibia. Namibia is the driest country south of the Sahara even in normal circumstances, and we all know that Namibia has suffered from severe drought in recent years. So severe, in fact, that despite good rains this year, many areas, including Windhoek, are still in emergency mode and under water restrictions. Many areas did not receive sufficient rain. And many areas still don’t have adequate basic water infrastructure.

And let’s not forget: Weather patterns in sub-Saharan Africa have become increasingly extreme. Droughts seem to have become more severe and prolonged. Floods, when they happen, also have become more severe.
But whether it’s drought or flood, the results are devastating. Animals and crops die; livelihoods are ruined; people go hungry. And whether it’s drought or flood, access to safe drinking water becomes more difficult. All of these effects are particularly severe in rural areas.

Whether the problem is too little water or too much, the most vulnerable members of society — the poor, the elderly, and children — are hit the hardest. And in rural Namibia, women are often hard-hit, as well, because they usually take on the extra burden of traveling farther to collect water and carry it back home to their families.

In my three years in Namibia, I have been watching the effects of the drought with growing concern, and my colleagues and I have looked for ways the American people might help Namibia cope not just with this particular crisis, but with future crises that will imperil access to food and clean water. Using an additional US $2.2 million from PEPFAR this year, we’re working to mitigate the effects of drought on people living with HIV/AIDS and on vulnerable children. This additional money is being used:

Helping with food and training is good, but we wanted to do more. Which brings us to why we are here at NamWater. Behind me is the first of eight water trucks that the U.S. government is donating to the Namibian government to help it respond in future water crises. Through USAID, the United States provided US$1.4 million to UNICEF to purchase eight water tankers to help NamWater move clean, safe drinking water to where it is needed most. The trucks can also be used in normal times to help communities that have been cut off from water for whatever reason. It is another way that America is trying to help Namibia succeed.

Just because some areas of this country were fortunate enough to receive good rainfall this year, some people seem to think the water crisis is over. They’re wrong. The rain is a temporary reprieve, not a solution. Growth in Namibia’s population and Namibia’s economy is going to put continuous pressure on the country’s water resources, even in good rain years. More and more Namibians will want access to safe, reliable drinking water. That means water should remain on top of everyone’s agenda for years to come.