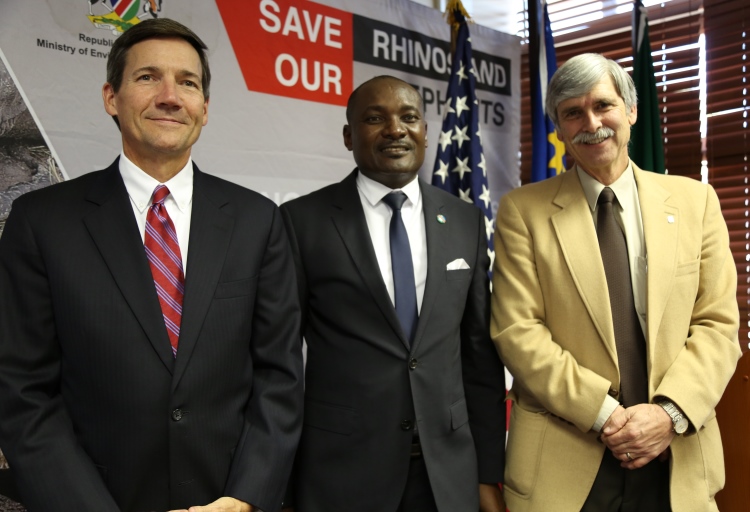 Namibia is a country known around the world for its natural beauty and diverse wildlife.  Tourists flock here by the thousands every year for a chance to see rhinos, cheetahs and elephants roaming wild and free in the Land of the Brave.  Namibia is equally renowned for its commitment to and success in managing and preserving its environment, as enshrined in the Namibian constitution.  Namibia’s success in this regard has taken many forms – from the establishment of more than 80 communal conservancies to the tripling in the country’s elephant population between 1995 and 2017.  This success has been the result of a strong commitment by the Namibian government in partnership with local communities, NGOs, and the American government.

But in the last few years, Namibia has begun to confront a new kind of environmental challenge. Poaching in one form or another has been around for decades, but trafficking in endangered wildlife products, particularly rhino horn and elephant tusk, has increased sharply in Namibia in just the last few years.  Hardly a week passes without headlines about a poaching incident or the appearance of a wildlife trafficker in court.  In response to this new and dangerous challenge, we want to help Namibia duplicate its previous successes using the same kind of combined effort.  That is why today I’m pleased to announce a N$23.4 million grant from the U.S. Department of State aimed specifically at combating wildlife trafficking in Namibia.

The multi-sector project made possible by this new grant aims to strengthen collaboration among protected area officials, communal conservancies, law enforcement, and freehold rhino custodian farms with the goal of improving wildlife crime detection, case development, and arrest and conviction rates.  Through training prosecutors and informing judges about the seriousness and complexities of wildlife crime, more offenders will be prosecuted and appropriately punished using existing organized crime and other legislation.  Engagement with local communities will incentivize and empower them to become more active and responsible stewards of their wildlife.  Better information-sharing among government agencies, civil society, and the private sector will ultimately result in greater successes in breaking up and punishing wildlife criminal syndicates.

This project will capitalize on a series of existing wildlife crime response strategies developed by the Namibian government over the past few years, leading to a draft National Strategy on Wildlife Protection and Law Enforcement.  It will kick-start a National Wildlife Crime Secretariat that will align and focus NGO, private sector and community efforts around a collectively agreed approach on how to tackle poaching and wildlife trafficking in Namibia.  The actions taken should significantly benefit livelihoods and will help preserve key wildlife species, while at the same time shifting the poaching paradigm in Namibia from a high-value/low-risk enterprise to a high-risk/low-value endeavor.

This project, while large and varied, is just part of a larger effort underway in Namibia to address wildlife trafficking.  One very important step taken recently was the National Assembly’s decision to increase penalties for wildlife trafficking to N$25 million in fines and 25 years in jail.  Honorable Minister Shifeta played a crucial role in getting those penalties increased and deserves congratulations and thanks for his effort.

Successfully combating wildlife trafficking in Namibia will take that kind of effort and more, which is why the grant that we’ve announced today embraces a combined approach.  The World Wildlife Fund and its partners in the project are experienced, highly qualified, and uniquely positioned to implement this program.  For more than 50 years worldwide and for a quarter of a century in Namibia, WWF’s mission has been to preserve the diversity and abundance of life on earth and the health of ecological systems, building a future in which human needs are in harmony with nature.  Under WWF’s leadership in this project, five partner organizations will take complementary roles within the coordinating structure of Namibia’s Wildlife Crime Program.

The success of this project will hinge on the commitment of many stakeholders throughout the Namibian government – the kind of commitment shown here today by the presence of representatives of the NamPol leadership, the Protected Resources Unit and the Prosecutor General’s office.  Thanks to all of you and your institutions for your support for this important initiative.

I’d like to close by noting that the grant announced here today is just the latest aspect of the decades-long collaboration between the Namibian and American governments to protect Namibia’s environmental resources in coordination with civil society and local communities.  By effectively detecting, punishing and deterring wildlife trafficking, Namibia can ensure that the vital natural resource of its native wildlife, which bolsters the country’s tourism and broader economy, will grace this land for generations to come.