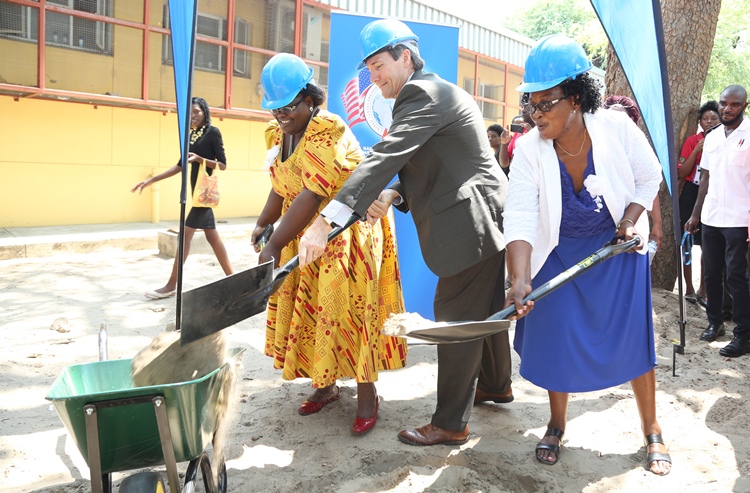 Good morning!  It is a real pleasure for me to be back at Katima Mulilo Hospital today.  My last visit here was back in February and one thing is immediately clear:  you have all been very busy!  So busy, in fact, that today I have the privilege to mark three different milestones:  the official opening of the U.S. Centers for Disease Control and Prevention, or CDC, office here; the groundbreaking for a series of renovations to the Katima Mulilo ART Clinic; and the significant progress made towards the complete renovation of the NIP laboratory;.

All of these projects reflect the amazing work that Zambezi region is doing to help people living with HIV lead healthy and high-quality lives.  These three developments also underscore the commitment of the United States to help the Namibian government accelerate its comprehensive response to the HIV epidemic in the regions like Zambezi that are most affected by it.

In support of that acceleration, the U.S. President’s Emergency Plan for AIDS Relief is currently funding an acceleration in the provision of HIV services in regions like Zambezi that have a high HIV burden.  What that means in practice in Zambezi region is that PEPFAR is expanding financial and technical support for Voluntary Medical Male Circumcision, laboratory services, HIV counselling and testing services, provision of anti-retroviral treatment, and human resources development.

I would like to thank the Namibian government, and particularly the Ministry of Health and Social Services, for its unwavering political support and leadership in addressing HIV and AIDS in this country.  Without the government taking the lead in the fight against the HIV epidemic, Namibia would not be among the countries that are making real and significant progress toward achieving control of the HIV epidemic by 2020.  I am proud to be able to say that some of remarkable progress that Namibia has already made toward epidemic control is the result of the strong and continuing partnership between the Namibian and American governments.

PEPFAR, through CDC Namibia, has been expanding its operations and ground support in Zambezi since 2015 as part of prioritization of our support to high-HIV-burden regions.  A similar extension of our services and technical support has been happening in Oshakati and Rundu.  All of our staff are located within Ministry of Health and Social Services premises, an arrangement that makes it easier for the staff to work hand-in-hand with their counterparts in the ministry to provide critical technical assistance on a daily basis.  This kind of co-location embodies the strong and productive partnership between the U.S. and Namibian governments.  It is a successful partnership that will continue to strengthen as we work together towards attaining an AIDS-free generation in Namibia.

Namibia is taking part in a major World Health Organization initiative called “Treat All,” and has already rolled it out in three regions, including Zambezi.  Treat All means that people who are HIV-positive but who would not have been put on treatment in the past are now being started on ART to prevent complications from HIV and reduce their risk of transmitting HIV to their uninfected partners.  Now, one thing that the WHO, the Namibian government and my government all realize about Treat All is that putting more people on treatment will inevitably increase the demand on existing treatment facilities.  Responding to that increased demand will require innovation and creativity.  It will also require redistribution of existing resources in order to decentralize HIV clinical services across the entire region and bring services to where the people live – in their communities.

The implementation of Treat All is one reason why the U.S. government has accelerated its HIV response support in Namibia.  We want to help the Namibian government reach the goal it has set to become the first African country to meet the UNAIDS 90-90-90 target.  That means identifying 90% of all people who are HIV positive, getting 90% of them onto lifesaving anti-retroviral treatment, and providing quality treatment services demonstrated by achieving viral suppression in 90% of the people taking ART.

As part of American support to help Namibia reach the 90-90-90 target and decentralize HIV care, Zambezi region will soon receive 8 prefabricated buildings for use as community-based ART clinics and modular housing.  This will help ensure that the people living with HIV can receive services closer to their homes and that clinical staff are available on site.  That in turn should contribute to improvements in patients’ adherence to anti-retroviral treatment and in their quality of life – both of which are key to achieving an AIDS-free generation.

In addition to the community-based ART clinics and modular housing, PEPFAR has committed just under N$1 million for improvements at the Katima Mulilo ART Clinic.  I will be joining in the groundbreaking for that project later today.  The clinic modifications include expansion of the ART pharmacy, the patient waiting area and the ablution facilities.  Work will also be done to improve ventilation, which is essential to reducing the risk to staff and patients of contracting airborne diseases like tuberculosis.  All of these modifications are intended to improve patient comfort while reducing the time patients have to spend at the facility, as more health care providers will be able to attend to them.

The third milestone I came to Katima Mulilo to mark today involves laboratory services.  With PEPFAR support, over the last few years the Namibia Institute of Pathology has acquired 11 high-volume HIV viral load testing machines and distributed them across the country.  These machines have enabled the Namibian government to expand viral load testing significantly.  To give you an idea how much, in 2015, 71% of patients on anti-retroviral therapy had access to viral load testing per Namibian national guidelines.  That is a remarkable achievement, but access is unevenly distributed and testing rates can be as low as 23% in some districts in the northern regions where the majority of HIV/AIDS patients live.

Access to laboratory services in general and to viral load testing in particular is complicated by the long distances between health facilities and laboratories and the stringent viral load specimen-handling requirements.  Currently, most viral load specimens from Katima Mulilo are being sent all the way to Windhoek for testing because of space constraints at the NIP lab here.  So in order to make viral load services more accessible and to improve turnaround time, the U.S. government provided just over N$ 1 million to renovate the current laboratory. The renovated lab will increase access to critical HIV viral load testing services where they are needed most here in Zambezi, and help get Namibia as a whole closer to the third 90 in the 90-90-90 targets.

So there you go: three separate and different, but closely related, developments right here at the Katima Mulilo Hospital, all of which will help get Namibia another step closer to an AIDS-free generation.  It is an honor for me, on behalf of the American people, to be here to officiate at these events.  Congratulations and thank you!