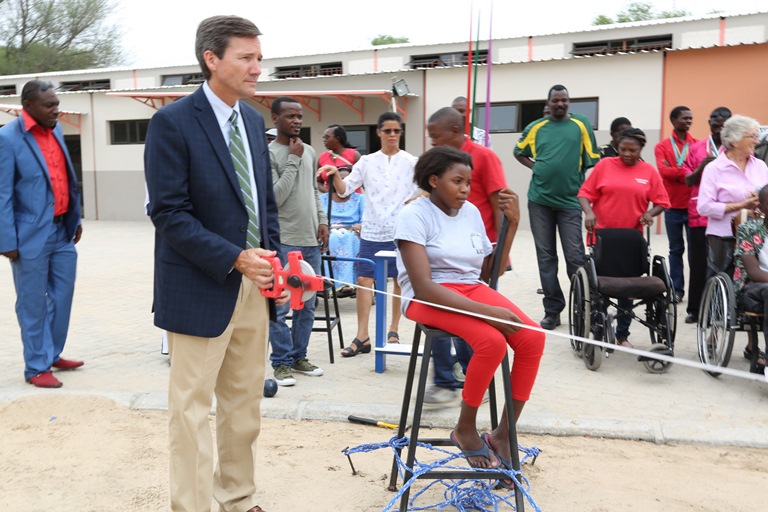 Neatly tucked away in Kamunu village, in the Zambezi region is the Kutwano Organization of Sports for People with Disabilities (PWD). Kutwano, which means ‘working together’ in Silozi has an estimated number of 128 active members, who they train and mentor in different sports disciplines. The American Ambassador to Namibia, Thomas. F. Daughton, through the United States Agency for International Development (USAID), handed over sports equipment valued at an estimated N$250 000 on 14 November 2016. It consisted of sports uniforms, shot puts, discusses, javelins, stopwatches, and special chairs to name a few.

The organization aims to better the lives of people with disabilities by creating an environment where they can share knowledge and see sports as a means to improve their standard of living. “My hope is that one of my athletes would follow in the footsteps of Namibian Paralympian Ananias Shikongo and Johanna Benson,” said Manga Mataa, the Chairperson of Kutwano. Two athletes represented the organization in March at the 2016 Nedbank Paralympic Games in South Africa. Kennedy Tiyeho participated in shot-put and javelin, and won gold and bronze medals while Misika Zibiso took part in the 100 and 200 meter races where he won gold and silver medals.

Mataa’s disability was caused by a car accident in the year 2000, which resulted in a fractured femur and a broken ankle. Today, she walks with minimal aid from her crutches and a permanent metal inserted in her leg. “I was travelling to Katima to attend my mom’s burial when the accident happened. I wanted to die because I worried about who would take care of me now,” she said when thinking about her injuries. “I even wanted to commit suicide when they told me they will amputate my leg but a woman I met while in hospital reminded me that I at least got the chance to know my mother. Some people never get the chance to meet their mothers.”

“People with disabilities want to and can participate in every aspect of daily life, be it professionally, academically, or in sports. Inclusion is every person’s right, and as you know well, disability does not mean inability,” said Ambassador Daughton at the handover ceremony.

Misika heard about Kutwano from a friend who found out through the Youth Council in Zambezi region. He registered for sports in 2013 and took part in a regional competition held in Oshikoto in 2014. The Kutwano team returned with 14 medals consisting of ten golds, two silvers and two bronze medals.  “I won a silver medal in 200 meters and two silver medals in 2014 in Windhoek,” he beamed as he wore his medals around his neck. “I do sports because I like it. I know Johanna Benson and Ananias Shikongo. I want to be just like them one day.”

Misika attributes his athletic success to his big sister and cousin. “I also have a friend in Khomas who encourages me to work hard.” However, even with all the support he receives from family and friends, Misika adds that there are some people who treat him and other people with disabilities ‘bad’ but he says he does not want to dwell on that. “I just want to tell young people that if you fail in school, try sports because you can learn a lot and you will be happy because you will have a healthy life and meet different people with disabilities. “My biggest dream is to win a gold medal at the Olympics one day.”

“I am proud to see that our support of sports equipment through USAID not only benefits Kutwano as an entity but all people with disabilities in the Zambezi Region, reaching out to people even in remote areas through awareness, training, and sports competitions,” stated Ambassador Daughton.

Before his introduction to Kutwano, Tiyeho recalls feeling isolated and alone, and did not have much information as a person with a disability. “I had to learn how to help myself very fast.” Today, he is the proud owner of 13 medals consisting of ten golds, two silvers and one bronze. He also advises other people with disabilities to try to do things for themselves instead of waiting for other people to help them. “Before this generous donation, we did not have equipment so we had to go to the youth center to practice. Being part of Kutwano has changed my life so much. Now, I have a lot of friends from all over.”