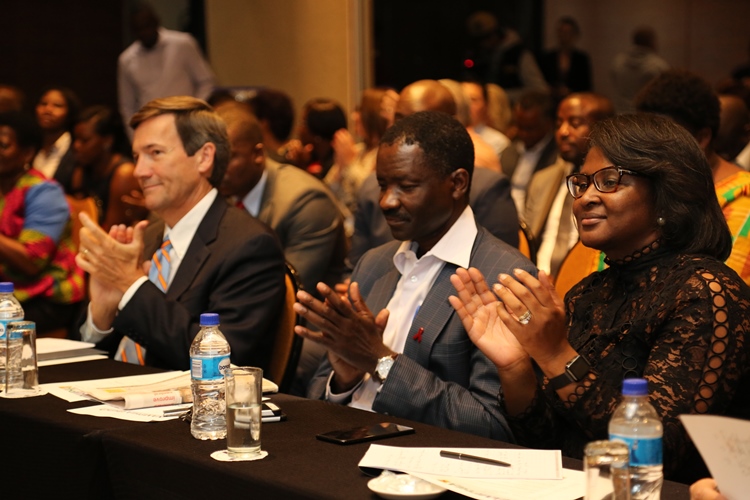 It is a great honor for me to be here today at the launch of the Namibia Population-Based HIV Survey, or NamPHIA.  For more than a decade, the American government, through the President’s Emergency Plan for AIDS Relief (PEPFAR), has teamed up with the government of Namibia to address the HIV epidemic in this country.  As a result, in my three years here I have frequently had the opportunity to speak at events that focus on how Namibia can reach epidemic control.  But today’s event is a little different.

Today we are launching the NamPHIA survey.  NamPHIA is a large-scale project whose goal is not to change HIV levels in the country, but rather to assess the impact that our collective interventions have had on HIV in Namibia and to evaluate the treatment response that has been implemented to date.  In other words, the point of NamPHIA is to find out in detail how we have done in the fight against HIV in Namibia.  The fact that the survey also has an impressive prevention, treatment and care component that will have a positive impact on the epidemic is an added benefit.

In my time in Namibia, one of the things I have learned is how important data is to the HIV response.  In fact, Namibia’s response to the HIV epidemic has always been data-driven.  Namibia already uses survey tools like the biennial HIV Sentinel Survey of pregnant women and the periodic Demographic and Health Survey, or DHS.  Both surveys provide valuable programming information.  And it’s thanks to those surveys we know that Namibia is making great strides in addressing the HIV epidemic, and is even now incredibly close to meeting the UNAIDS 90/90/90 targets.

From the Sentinel Survey and the DHS, we already know:

But we still need more information.  To cross that last gap between where we are and fully achieving the 90/90/90 targets – in other words, for the last and hardest part of the journey – we need to use the power of more detailed data.  We need more information because there are still things about the epidemic that we do not know and that we need to know.

We need to get a population-based perspective to understand the full magnitude of what is not yet done.  We need to validate the targeted interventions that are already being implemented.  And we need detailed information that will provide a basis for the interventions still to come.  To put it simply, we need to know exactly how HIV is affecting Namibia at the level of individual Namibians.

That isn’t to say that we don’t already know a lot.  We already know that some parts of the population are more at risk of HIV infection than others. For example, we know that an adolescent girl in Namibia is two to five times more likely to be infected with HIV than a boy her same age.  And knowing that, specific efforts have already been put in place to address that worrying trend.  But we can do more.  If we have comprehensive local data that shows how adolescent girls in Namibia are entering the HIV infection cycle, we can take more effective steps to prevent infections among adolescent girls.  NamPHIA will make that possible.

We also already know that the health system does not retain 100% of HIV-positive patients on treatment.  And knowing that, interventions have already been put in place to improve patient retention.  But we can do more.  If we have comprehensive local data about why patients stop their treatment, we can develop better ways to help ensure that patients continue to take their ARVs.  NamPHIA will make that possible.

And then there are the things that we don’t know.  For example, we have never had any representative data about HIV infection among infants and young children.  We estimate that most children who are HIV+ have been identified and are on treatment, but that’s just an estimate.  NamPHIA will help us to confirm if the estimate is accurate.  If we have comprehensive local data about how infants and children are entering the HIV infection cycle, then we can do more to save their lives.  NamPHIA will make that possible.

And while Namibia has commendable systems in place to support people seeking treatment and care, what about the people who are not in the system?  I will say it again: there is more we can do, and NamPHIA will help make it possible.

Everyone in this country who is part of the fight to end AIDS faces a clear reality:  Identifying and treating people who are not yet enrolled in the system will become more and more challenging as Namibia gets closer and closer to the goal.  In other words, reaching the target is, as the saying goes, “so near and yet so far.”  NamPHIA will give us the information to help us reach it.

We need to take action, not just as a task force in a boardroom, not just as conference delegates at a meeting, but as people working together to control the AIDS epidemic.  People living with HIV and people living without it; men and women; adults and children — all can play their part in helping Namibia reach epidemic control by agreeing to participate, if their household is selected, in the NamPHIA survey.  More than 26,000 people will have the opportunity to contribute to how the healthcare system designs targeted interventions to control the AIDS epidemic.

The key word here is “together.”  NamPHIA is not a government-only initiative. NamPHIA, as its full name explains, is a population-based HIV survey.  The survey will collect information about how many people are currently infected with HIV (that is, HIV prevalence); how many people have new infections (that’s HIV incidence); and how many people with HIV are on effective treatment (which is HIV viral suppression).  Participants in NamPHIA will also be able to share their experiences with the health system, and that information that will be used to help improve health services for everyone in Namibia.

Namibia is the 13th country to implement a population-based HIV survey. The results released recently from surveys in Malawi, Zimbabwe and Zambia show the tremendous progress those countries have made in addressing their HIV epidemics.  I have no doubt that the NamPHIA results will show similar or even greater progress here.  Namibia and the other countries implementing the population-based HIV impact assessment surveys are taking the smart course, because they are taking data-driven programming to the next level to address the HIV epidemic.

I stand here today secure in the knowledge that Namibia is about to embark on a project that will allow us all to celebrate the progress that has already been made.  At the same time it will provide us with the more detailed information that we need to identify the challenges that still exist, so that together, Namibia can continue — and complete — its journey towards an AIDS-free generation.