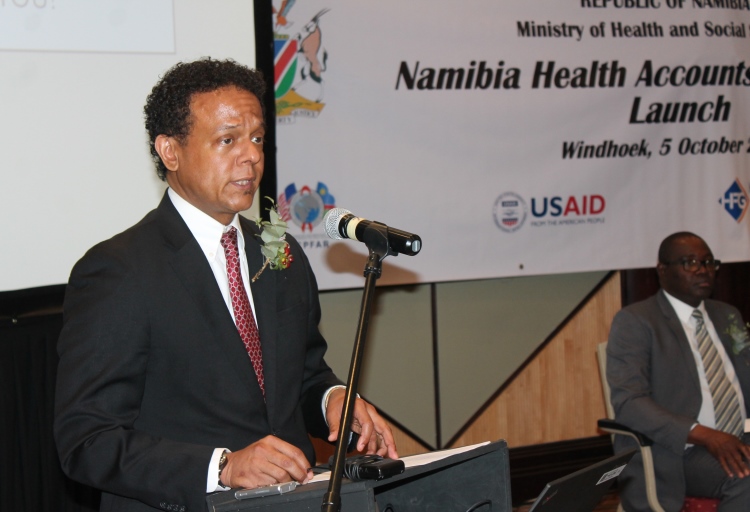 I would like to congratulate the Ministry of Health and Social Services on the completion of the 2014/15 Health Accounts Report, the fifth round of Health Accounts you have completed.  I am pleased to see the results of this exercise presented here today.

The information contained in this document is valuable, indeed critical, for evidence-based decision-making for all partners in health. Recognizing the importance of the Health Accounts, the United States government started supporting the Ministry of Health and Social Services in 2007 with the second round of Health Accounts.

Over the years, the capacity within the Ministry of Health and Social Services to conduct the Health Accounts exercise has increased considerably. We are proud to note that the Ministry has taken the lead and managed important phases independently, without any significant support from technical partners.

As Namibia is classified as an upper-middle income country, it has seen a consistent decrease in donor funding. Therefore, our joint vision is that the Health Ministry will be able to institutionalize the process and in future conduct these exercises on its own.

It is heartening to see Namibia maintain her commitment to investing heavily in health, and to see the country’s share of the total health expenditure rise. In 2014/2015, that share increased to 64 percent, a 10 percent increase over the amount  just two (2) years prior.

Furthermore, it is encouraging to see Namibia getting close to achieving the Abuja target of allocating 15 percent of the government budget to health. At 13 percent, Namibia’s share is higher than in most other countries of the region.

To further increase the financial sustainability of health programs, Namibia has made a concerted effort to take over the procurement of antiretroviral drugs and to integrate the provision of HIV services. This will promote the long-term viability of the country’s HIV/AIDS response. But it is also important to sustain other critical interventions, such as prevention.

The U.S. government remains committed to the fight against HIV/AIDS in Namibia and will continue to support the country, primarily with PEPFAR funding through USAID and CDC, as it tries to achieve the 90-90-90 targets – and we are really close to achieving them.  Namibia is, in fact, included as one of the focus countries in the new PEPFAR strategy released on September 19 by Secretary of State, Rex Tillerson.

That new strategy outlines plans to accelerate implementation of ongoing work in countries like Namibia, where there is the potential to achieve HIV/AIDS epidemic control by 2020. As this good work continues, it is important to keep in mind that the battle is not over, and we must re-double our efforts to reach the final 10 percent. As is so often the case in life, the last stretch is the hardest.

In 2016, PEPFAR Namibia invested resources to scale up HIV testing services, ART, and treatment monitoring through viral load testing at health facilities. The focus was on decentralizing HIV services and establishing community-based models of care.

The goal for 2017 was to accelerate Namibia’s achievement of treatment saturation– more than 81% treatment coverage across all age and sex bands, in the high-burden HIV districts. We also scaled up evidence-based prevention activities among groups at highest risk of contracting HIV.

One key to this is identifying older HIV-positive men and initiating them on ART since data shows that sexual partnerships with older men are correlated with new infections among adolescent girls and young women. And you can imagine what happens next:

These young women move on to have relationships with men their own age, infecting younger men who in time, when older, infect younger women again. It is a vicious cycle – a vicious cycle that we must break! And to achieve that we need, first and foremost, the men. We have to encourage men to get tested.

As part of our efforts, we are continuing our close working relationship with the Namibian government through regular meetings on various levels. This includes the Health Ministry, the Office of the First Lady, the Ministry of Education, the National Planning Commission, and the Ministry of Gender Equality and Child Welfare.

The Health Accounts have provided critical health financing information required to inform strategic program decisions that will enable development partners to direct their support in a way that has the greatest impact on health outcomes. The production and use of credible financial data is critical for sound governance of the health sector to the benefit of each and every Namibian.

It is gratifying to see the government’s commitment to regularly track health spending through the Health Accounts exercise. While these periodic studies are important, it is also necessary to build systems that can produce routine financial data at all levels of the health sector for efficient resource management. Resource allocation should focus on programs, populations, and geographic areas where the funds can make the greatest contribution to improving the health of Namibians, particularly in terms of addressing critical health needs and improving HIV treatment coverage.

It is with great admiration that we congratulate the Government of Namibia for stepping in to fill the breach in the face of declining donor dollars, for striving to strengthen its health systems, and for doing its utmost to improve the health and livelihood of its most vulnerable citizens.