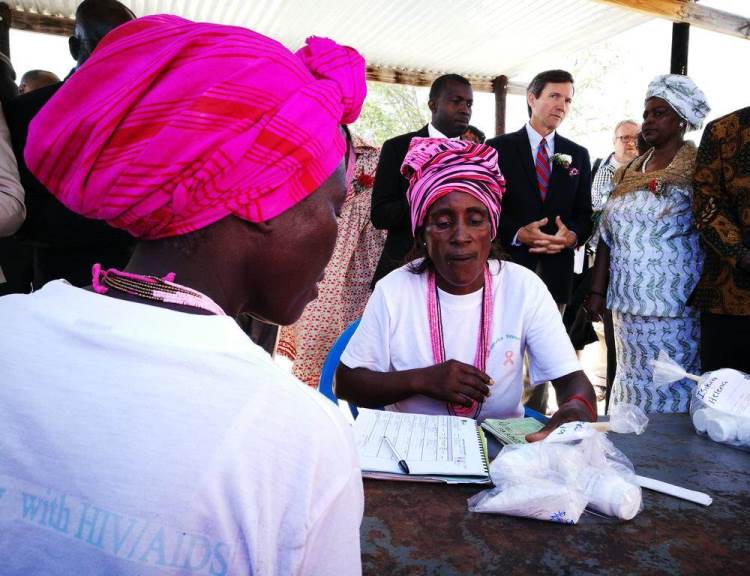 It is a great honor for me to be here in Onandjamba today to celebrate an important milestone on the road to controlling the HIV epidemic in Namibia.

For more than a decade, the American government, through the President’s Emergency Plan for AIDS Relief (PEPFAR), has teamed up with the government of Namibia to address HIV and AIDS in this country.  As a result of the incredible work that we have done together, we have been able to celebrate the progress made in reducing new HIV infections and in improving the lives of patients living with HIV.

And today marks another one of these milestones, because today we are celebrating the successful implementation of a community-based anti-retroviral therapy refill model, better known as C-BART.  C-BART is an answer to one of the basic challenges of Namibia, where patients are spread across large expanses of territory.  C-BART allows HIV-positive patients who are otherwise healthy to get their HIV medicines right in their own communities without having to travel to a clinic every one or two or three months.  And making it easier for the patients to get their medicines means they can take their medicines on a regular basis and not miss any doses – and stay healthy.

We all hear about the UNAIDS 90-90-90 goals.  Well, today is about the third 90.  The first 90 is about testing, because it means 90% of people with HIV have to know their status.  The second 90 means that 90% of the people who test positive for HIV start taking life-saving ART.  And then that third 90 – the one we’re celebrating here today – means that 90% of the people taking ART keep taking their medicine and periodically get checked to make sure the medicine is keeping their viral load under control.  That not only helps HIV-positive people live normal, healthy lives.  It also prevents them from passing the virus on to others.  That’s why the importance of your actions cannot be understated.

People living with HIV in Namibia have long faced challenges in accessing ART and chronic HIV care.  Sometimes the challenge is long waiting times at health facilities caused by the sheer number of patients, and sometimes it’s the long distances patients have to travel to the nearest health facility to receive HIV services.  Economic reality complicates those challenges, too.  Patients lose productive work time while waiting at a clinic.  And some lack the money to pay for transportation, food, and even administrative fees for health services.

In order to address many of these challenges, public health professionals around the world studied different approaches to determine which ones best serve the needs of each community.  The World Health Organization recognized the importance of addressing the needs of different groups of people, so in 2016 it published new guidelines recommending that stable patients should be able to get ARV refills right in their own communities.

The community-based ARV medicine distribution model we are celebrating today helps to remove the economic and social barriers that make it difficult for people living with HIV, especially those living far from health facilities, to pick up their medicine on a regular basis and adhere to their treatment regime.  In short, instead of making the community go to the pharmacy, CBART brings the pharmacy to the community.  That improves both treatment adherence and patient retention.  Or, if you’re not a doctor, it keeps people taking their medicine and taking it when they’re supposed to.

Making CBART happen hasn’t been simple – it’s taken work from a lot of different people and organizations.  This Namibia Adherence and Retention Project (NARP), as we call it, has been implemented by Project HOPE in support of the Ministry of Health and Social Services to provide HIV patients in remote areas access to ARV treatment.  NARP is funded by the U.S. government through USAID, in partnership with the Tonata PLHIV support group’s network.

It has been the experience of Namibia and many other African countries that people living with HIV organize themselves in support groups and seek to create an environment of self-acceptance.  When you think about it, it makes perfect sense:  They understand their medical condition and they support each other’s efforts to adhere to lifelong HIV care and treatment.  One such group in Namibia is the “Let’s Unite Support Group”.

This group decided to do something to deal with the challenges that led many of their members to stop or interrupt their treatment.  Their challenges were increased by the economic pressures I mentioned, including lack of transport money to get to health facilities, lack of money for food when they visit the health facilities – and the list goes on.  The “Let’s Unite Support Group” wanted to find a way to remove those day-to-day barriers to the health of their members.

So, using one of their members who was working as a pharmacy assistant at the Engela State Hospital, the group negotiated with hospital management to allow a selected member of their group to pick up and deliver ART medicine for the rest of the group members in their community.  The courier’s out of pocket costs were covered collectively by members’ contributions.  Ultimately, this community teamwork resulted in a higher adherence rate among group members.  In other words, more group members stayed on their ARVs.

The community-based model that the “Let’s Unite Support Group” built has since been copied by others, like the Onyaanya-Gwaanaka support group in this community.  In fact, the model is being copied by PLHIV support groups all over Namibia, especially in the north where the HIV epidemic has its most significant impact.

The objectives of the C-BART refill model are many, but I’d like to highlight a few of the major ones. This type of community-based ARV distribution will:

To date, as a result of PEPFAR’s support through the Namibia Adherence and Retention Project, Tonata, Management Sciences for Health, the Health Ministry and other partners, we have already achieved the following milestones:

Congratulations to all of you for these significant achievements!  Thank you for your efforts to support each other, and thank you for pioneering a model that will benefit all Namibians.