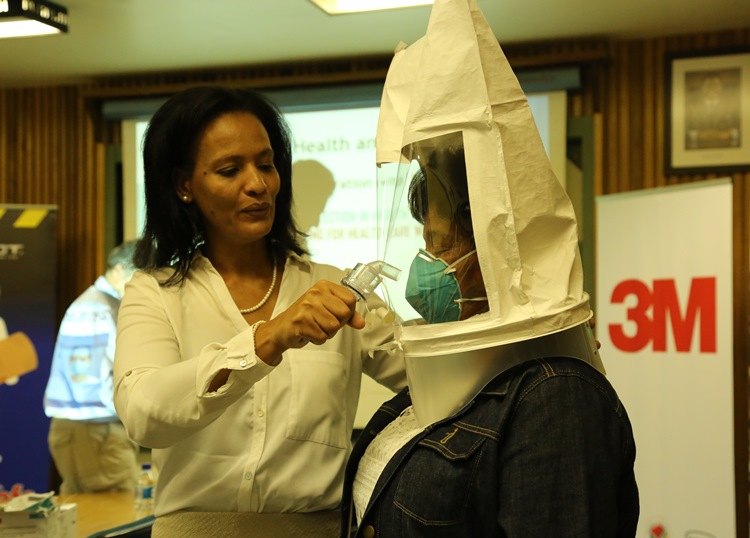 Windhoek – On Monday 10 April, Deputy Minister of Health and Social Services, Juliet Kavetuna, and U.S. Ambassador Thomas Daughton attended one of the training sessions conducted by the Ministry of Health and Social Services on the use of respiratory protection by health care workers. The training was conducted by 3M and CYMOT with support from the U.S President’s Emergency Plan for AIDS Relief (PEPFAR) through the U.S. Centers for Disease Control and Prevention (CDC).

The Deputy Minister and Ambassador Daughton were given a briefing about protection against TB transmission at health facilities through a comprehensive TB infection control program that includes administrative controls, environmental controls and the use of personal protective equipment.

The current training will build capacity amongst MoHSS health care workers regarding optimal use of personal protective equipment including the correct fit and seal of the mask. TB respirator fit testing targets all cadres of employees working in MOHSS health facilities. In the last month over 200 healthcare workers have been trained throughout the country on the use of respiratory protection.

Namibia is one of the top ten countries most affected by tuberculosis infection in the world. The WHO reported Namibia to have a case reporting rate of 489/100,000 population in 2015, with an estimated TB/HIV co-infection rate around 40%. Tuberculosis is a serious health threat, especially for people living with HIV. People living with HIV are more likely than others to become sick with TB. People infected with HIV who also have either latent (dormant) TB infection or active TB disease can be effectively treated.