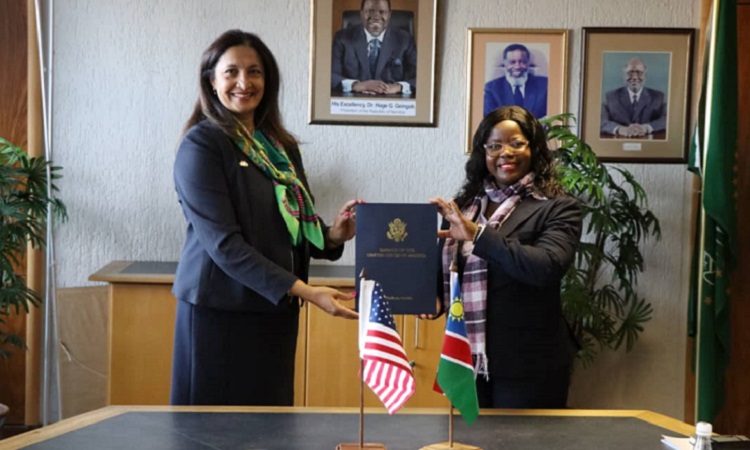 U.S. Under Secretary Uzra Zeya hands over the 2022 Trafficking in Persons Report to Jenelly Matundu, Deputy Minister of the Ministry of International Relations and Cooperation.

Windhoek – Namibia achieved “Tier 1” status for its actions during 2021 in the fight against human trafficking, according to a U.S. State Department Report.  This is the third consecutive year that Trafficking in Person’s (TIP) Report ranked Namibia in the top tier, and Namibia remains the only “Tier 1” African country.

The United States is an active participant in Namibia’s National Coordinating Body (NCB) on trafficking in persons, which also includes the European Union, the International Organization for Migration, and other groups.  The United States provided the funding for the NCB’s analysis for Namibia’s 2021 to 2026 plan to counter human trafficking.

“I want to congratulate Namibia for its commitment fighting the terrible crime of human trafficking,” said Under Secretary Zeya.  “Trafficking in persons is an international crime, which requires cooperation among countries, NGOs, and international organizations to truly address it.  Namibia’s leadership in this joint effort has saved many vulnerable people from falling victim to trafficking and helped rescue and treat those who have.  More still needs to be done, by America, by Namibia, and by the international community to put an end to this horrifying crime against an individual’s rights.”

Following her meeting with the Deputy Minister, Under Secretary Zeya met with President Geingob, and the two discussed joint efforts to advance shared global priorities on transnational crime, economic and racial justice, and human rights.

“The U.S. and Namibia have a strong relationship rooted on the values we share as democracies, like defense of human rights and rejection of racism,” said Under Secretary Zeya.  “Democracies can deliver best for their people, and our countries must support each other to constantly strengthen our democratic institutions.  Namibia’s achievements on human trafficking, wildlife trafficking, media freedom, and overcoming HIV are proof that democracies like ours deliver for their people when we partner together.”

Uzra Zeya is the U.S. State Department’s Under Secretary for Civilian Security, Democracy, and Human Rights.  The equivalent of a Deputy Minister, she will meet with members of civil society as well as Namibia’s young political and social leaders to hear their vision for Namibia’s future and the United States partnership.  She will also visit a refugee camp where refugees receive services funded by the United States, and Namibia’s Waterberg Plateau National Park to see first-hand U.S.-Namibia cooperation to protect endangered wildlife from trafficking.