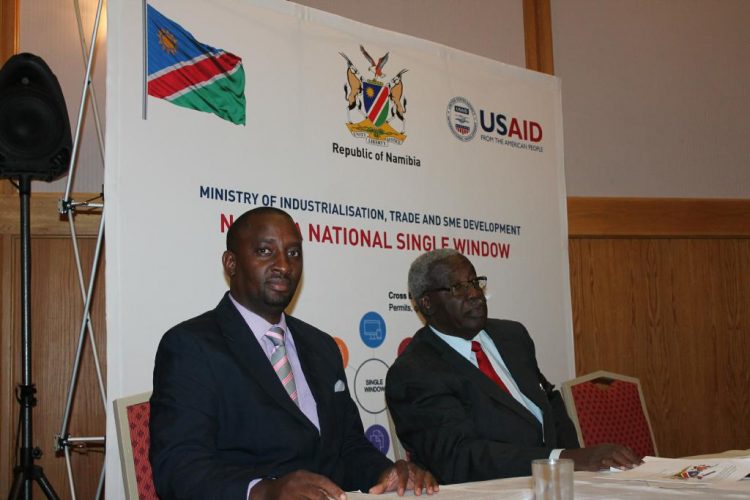 It is my pleasure to be here with you today at this workshop as it is the next crucial step toward the realization of Namibia’s National Single Window to facilitate trade.

Workshop. Work and shop. Already these keywords indicate that you must be at the right place when you are dealing with trade.

I understand that you have gathered here today to forge the way forward for Namibia’s cross-border trade with the help of a National Single Window, to decide where it will reside, and to whom the National Single Window will answer.  These are important and difficult decisions that require a whole of government approach as Namibia steps toward greater economic prosperity for this great people and beautiful country.

Some of you may be asking “What interest does America have in a National Single Window for Namibia?”  America’s interest is helping Namibia succeed.  The U.S. government sees the National Single Window as Namibia’s greatest way to ease trade for its businesses, stakeholders, and neighboring countries. And increased trade means increased prosperity…and increased government revenue.  It is why the U.S. government through its USAID Southern African Regional Trade and Investment Hub has been supporting this initiative for the past five years and will continue to do so into the future.

In short, realizing a National Single Window is the right thing to do for Namibia.

The National Single Window has come a long way. It was chosen from several alternatives as the best way to realize Namibia’s vision to become one of the best in speed, efficiency and low cost of trading across borders. I understand that His Excellency, the President, also has made realizing the National Single Window by March 2018 one of the hallmark goals of his Harambee Prosperity Plan.

Think of the harbor of Walvis Bay, for instance. Why is it being extended? Because Walvis Bay is a crucial trading gateway to the SADC region. And for it to work best it will need to function smoothly and quickly – and that’s where the National Single Window comes in.

We all know what a busy port looks like without a Single Window: freight forwarders carry bundles of papers, and can spend hours, if not days, going from office to office, window to window just to have their various documents reviewed and stamped to clear goods. All the while, goods sit idle in containers instead of making money.  A similar scene often plays out at land borders where long lines of lorries – and their products – bake in the sun as their paperwork reaches final clearance.

But the Namibian government decided there is a better way to do business.  You sent experts on missions to Kenya, Ghana and Mauritius to see how trade was facilitated with their National Single Window projects.  These trips observed firsthand how a National Single Window makes the exchange of information efficient between traders and government agencies, and among government agencies, reducing the clearance process from days to minutes, all while increasing trade volume.

The figures speak for themselves: Ghana’s customs revenue increased by 50% within the first year after the introduction of the Single Window while, simultaneously, time and cost of exporting shrank by 65%.  After Mozambique worked hard to institute its National Single Window, it now processes over 400,000 clearances per year…or 1,500 shipments per day.

The U.S. government applauds the Namibian government for striking out on this opportunity to facilitate business people who will help make Namibia stronger and more prosperous.  And in the end, it is the Namibian consumers who also will benefit from quicker passage of goods, potentially lower prices and increased government revenues from increased trade.

Honorable Ministers, Permanent Secretaries, stakeholders, ladies and gentlemen – you are almost there and you have reason to be proud of your work thus far. The components are in place. They were discussed, tested and are proven to be functional.  You have done your homework.  Yes, there is no easy way to implement a National Single Window.  It takes tough decisions, trust, and civic duty.  The time has come today to get cracking and steam up the country’s trade engine.  It is up to you.

In this workshop, it will be for you to decide on the engine driver and the engine-driving environment. Indeed, it is imperative that you reach agreement today on the nature and structure of the operating authority for the Single Window.

Some may still have doubts, especially given the current budget environment and competing priorities.  Yet, I would argue that you cannot afford not to put in place a National Single Window.  The revenues from increased trade, the freer flow of more components and goods are what all stakeholders seek from the government, from the haulers, to the businesses, and down to the Namibian consumer.  You are truly on the precipice of a win-win situation.

The U.S. Government, through USAID, has made a substantial commitment to this project and…to some degree…it is disappointing to see that the National Single Window isn’t further along than it is.  However, I’m pleased to say that U.S. commitment through the Trade and Investment Hub will continue as this project is crucial for increasing Namibia’s competitiveness.  We are proud to have worked closely with our partners in the Namibian government to advance the Single Window and look forward to the day that it is operational.

Again, our efforts are for the simple purpose of improving the livelihood of Namibians and people across the region by helping Namibia progress toward her next level of trading competitiveness.