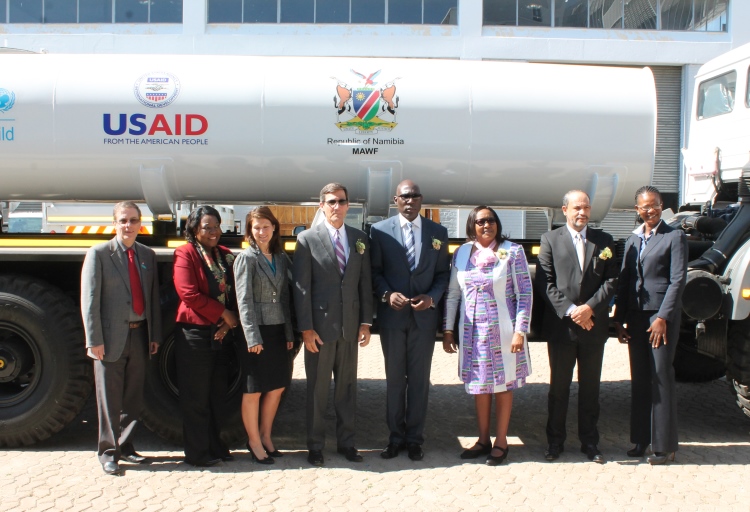 U.S. Ambassador Thomas Daughton (fourth from left) hands over water tankers trucks to Ministry of NamWater, through the Ministry of Agriculture, Water & Forestry, as part of the U.S. government’s current drought assistance to Namibia. He is joined by UNICEF Country Representative, Micaela Marque

Windhoek – On 24 May 2017, United States Ambassador Thomas F. Daughton handed over the first of eight water tanker trucks to NamWater, through the Ministry of Agriculture, Water & Forestry, as part of the U.S. government’s current drought assistance to Namibia.

Deputy Minister of Agriculture, Water and Forestry, Ms. Anna Shiweda expressed her gratitude to the American government for the donation, underlining that the water tankers will help facilitate the ministry’s strategies to supply water to communities that are affected by drought, especially in areas where groundwater resources are limited or non-existent.

“In such cases, the ministry is left with no other option but to spend the already scare resources on the transportation of water to areas where people have settled,” she said on behalf of Minister John Mutorwa. “Therefore, there is no doubt that this contribution from USAID will assist us in closing the gap between the water sources and our people during the time of drought and other emergencies.”

U.S. Ambassador Daughton highlighted that “the most vulnerable members of society – the poor, the elderly and children – are hit the hardest,” adding that “on behalf of the United States, it is my honor to partner with the Namibian government in its effort to ensure that the precious resource of water is provided to this country’s most precious resource, the Namibian people.”

Since the start of the Drought Relief Program in 2016, the Ministry of Agriculture, Water and Forestry has been implementing water supply initiatives that include the drilling of boreholes and the provision of water tanker services to affected communities.

According to government statistics quoted by the United Nations Children’s Fund (UNICEF), more than a quarter of the families in Namibia have become food insecure because of poor crop yields, while many do not have access to clean water either. Government reports further indicate that more than 300,000 Namibians affected by drought are children.

Moreover, it was recently found that twenty six (26) percent of all boreholes drilled in 2015 do not have sufficient water or water of poor quality. As a result, these areas also had to be serviced with water tankers, putting additional strain on the existing limited fleet of water tankers. According to Namwater, the eight additional off-road water tanker trucks could not have come at a more opportune time.

Trucking fresh water supplies combined with improved water, sanitation and hygiene activities forms part of the supplementary support which will go to communities without safe water through the channels established by the national water utility.

This service, according to UNICEF Country Representative, Micaela Marques de Sousa “gives extra support to families who have been rendered vulnerable by erratic rains, prolonged dry spells and the drought across Namibia.”

The United States, through the U.S. Agency for International Development (USAID), provided to UNICEF the funds to purchase the eight water trucks, as well as US$669,000 (N$8.9 million) for community and school sanitation projects. These interventions will tackle widespread open defecation and promotion of hygiene to reduce the impact of water-borne diseases.

Additionally, the U.S. government through the President’s Emergency Fund for AIDS Relief (PEPFAR) and USAID, has dedicated another US$2.4 million (N$30 million) to mitigate the effects of drought and malnutrition in areas with a high number of vulnerable children and a high HIV burden.

This includes US$250,000 (N$3.3 million) to UNICEF for drought assessment. Among others, this additional money is being used to provide food supplements to over 14,000 Namibians already diagnosed as undernourished.