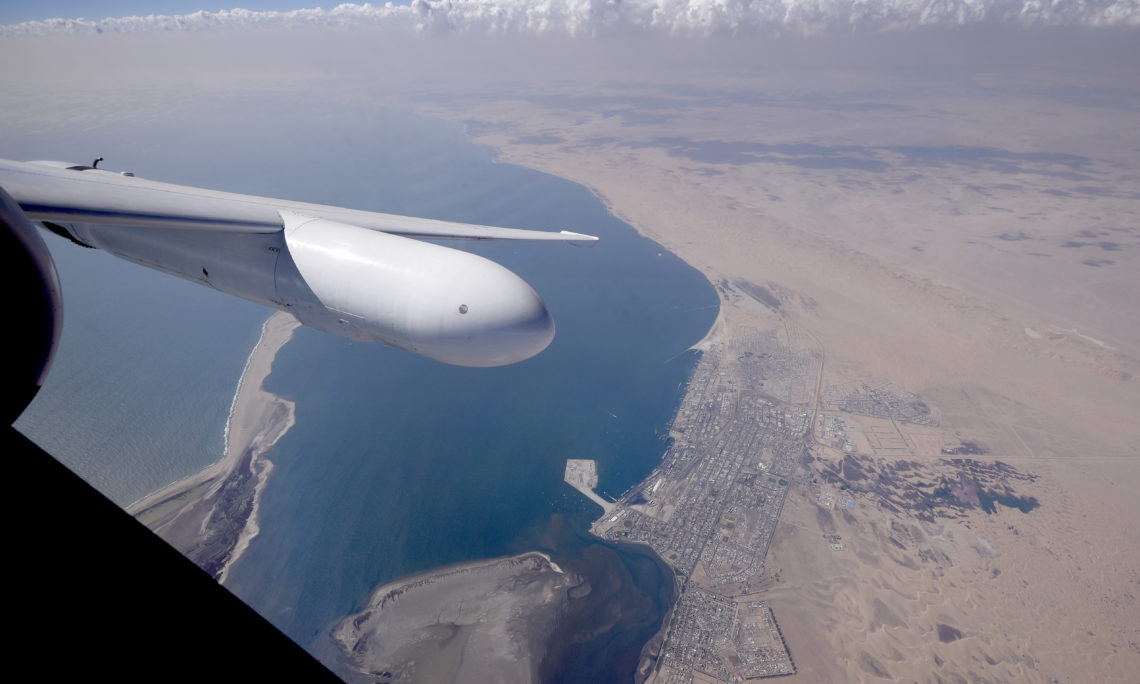 See the view of Walvis Bay, Namibia from ER-2 near the end of its first ORACLES mission. Credits: Stuart Broce

NASA scientists and two research aircraft have come to a unique natural laboratory off the coast of Namibia to study a major unknown in future climate prediction.

The coast of Namibia is one of three places on Earth with persistent low-level clouds, and the only such location with a steady supply of tiny aerosol particles in the form of smoke from inland fires that mix with the clouds. NASA’s Observations of Aerosols Above Clouds and their Interactions (ORACLES) mission will observe and measure how these particles interact with clouds and change their ability to warm or cool the planet.

“This is the perfect natural laboratory to study aerosol-cloud interactions, which are some of the largest uncertainties in the prediction of future climate,” said Jens Redemann, ORACLES principal investigator at NASA’s Ames Research Center in Moffett Field, California.

Some aerosols, such as dust and sea salt, have a natural origin. But others, such as soot and smoke released by fires and industry, are the result of human activities. Once aerosols enter the atmosphere, they can cause either a warming or cooling effect.

“Human activities currently are estimated to be responsible for perhaps half of all the aerosol particles in the atmosphere,” said Robert Wood, a cloud scientist at the University of Washington in Seattle and ORACLES deputy principal investigator. “Smoke particles both reflect sunlight back to space, thus cooling the Earth, and absorb sunlight, which has the opposite effect of warming the Earth. When aerosols encounter clouds, they also change the properties of the clouds they are ingested into.”

Understanding which effect is dominant, and under what conditions, is essential for improving the regional and global computer models that predict what may occur with future climate change. Changes in the properties of the cloud layer caused by aerosols could also have an effect on regional coastal fisheries by altering the amount of sunlight reaching the ocean surface that drives currents and ocean up welling.

The initially separate cloud and aerosol layers off the Namibian coast are relatively stable. As the cloud layers thicken away from shore like a wedge, it gradually mixes with the aerosol layer. The result is a range of steadily changing conditions that allow the ORACLES science team to probe several different types of cloud-aerosol interactions.

The ORACLES field campaign is based out of Walvis Bay in Namibia, where thanks to a grant from the U.S. Embassy in Windhoek, faculty and students from Namibian universities will be working alongside the ORACLES team. The project team has built new relationships with African colleagues, in particular, the Namibia University of Science and Technology in Windhoek. University personnel support logistics for ORACLES field work and will collaborate in data analysis and modeling. The Gobabeb Research and Training Centre in the Namib Desert, which previously has worked with NASA using the desert as an analog for the surface of other planets, is providing ground-based remote sensing of the atmosphere.

“Science is a great unifier,” said Bernadette Squire Luna, ORACLES project manager at Ames. “We are building relationships with Namibian scientists that will outlast this project and will lead to yet more science and more interactions. We’re connecting our countries in a very grassroots way.”

NASA’s P-3 aircraft, managed by the agency’s Wallops Flight Facility in Wallops Island, Virginia, carries five remote sensing instruments and flies through the cloud and aerosol layers at up to 20,000 feet to gather direct measurements from more than a dozen cloud and aerosol probes attached to the wings and inlets on the windows. NASA’s ER-2 aircraft, managed by the agency’s Armstrong Flight Research Center in Edwards, California, will fly at 65,000 feet with instruments that make measurements similar to those acquired from satellites.

ORACLES flights will complement and validate current satellite observations of aerosols and clouds, and test instruments that may fly on future satellites, by making detailed observations that are impossible to make from space with current capabilities.

Unlike a satellite, which generally gets one pass per day over a certain location, both aircraft will be able to sample clouds and aerosols throughout the day over the entire study area to see how they evolve. Together, data from the two aircraft will provide a comprehensive picture of how aerosols behave in the presence of clouds – and how aerosols directly or indirectly change how clouds behave.

For more information about ORACLES, visit:

NASA collects data from space, air, land and sea to increase our understanding of our home planet, improve lives and safeguard our future. NASA develops new ways to observe and study Earth’s interconnected natural systems with long-term data records. The agency freely shares this unique knowledge and works with institutions around the world to gain new insights into how our planet is changing.