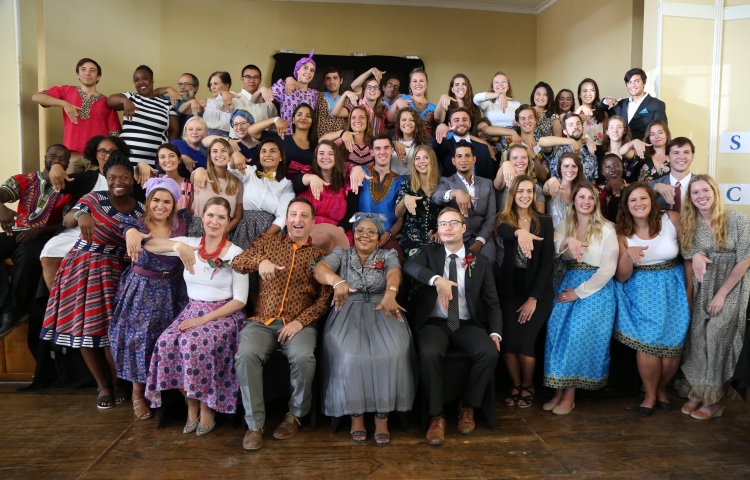 Good morning!  It is a great pleasure for me to be here today to swear in another generation of Peace Corps Volunteers in Namibia. The 46 Volunteers here today have pledged to give their most precious resource – their time – to help fellow human beings and join the 100 Volunteers already in country doing the same.

In 1990, then as Prime Minister, President Hage Geingob made the request for Peace Corps Volunteers to come to Namibia to help educate the country’s future generations.  This class of volunteers represents that great tradition.

Please allow me to acknowledge our Namibian colleagues here today – government officials, NGOs, counterparts, and Peace Corps staff.  Thank you for joining us.  It’s an honor to have you here today to welcome officially our new Peace Corps Volunteers.  The success of Peace Corps Volunteers very much depends on the support we receive from the Namibian government, and I would like in particular to thank the Ministry of Education, Arts and Culture and the Ministry of Higher Education, Training, and Innovation for their longstanding support for the Peace Corps.

I would also like to offer my thanks to the families, neighbors, teachers, and community representatives who have helped our Volunteers to understand Namibia’s diverse cultures, traditions and languages.  Many of you have worked alongside Peace Corps for years, and we deeply appreciate your commitment.

And, to our new Volunteers, congratulations.  You embody the very best America has to offer, and I am honored to join you for your swearing in ceremony today.

I have had the pleasure of working with Peace Corps in a number of countries across the African continent and was even involved in helping place the first Peace Corps Volunteer at the African Union.

While I had seen and known the good work that Volunteers do at their sites for a long time, a few years ago I had the unique opportunity to live with a returned Peace Corps Volunteer upon his resettlement in the United States.  That was my younger brother, and we were living in Manhattan.  That was the first time I truly experienced firsthand how Peace Corps promotes world peace and friendship and that I learned about the third pillar, which is living Peace Corps values upon return to the United States.

In the aftermath of Hurricane Sandy, my brother was proactive about working in our community in the East Village to dredge basements and bail water out of apartments while we went days without electricity.  He took a job to help disadvantaged inner-city youth receive the same opportunities and experiences as others their age.  And, possibly most striking of all, he accepted a modest salary and worked tirelessly because he believed in what he was doing.

I was deeply impressed by the skills and values that my brother learned while serving in Peace Corps.  And, it was then that I finally understood the third pillar of Peace Corps and the true and lasting impact on Volunteers who have served abroad.

While, as new volunteers, you are probably not yet thinking about your return to the United States, I offer that example, so that, as Stephen Covey recommends, you “begin with the end in mind” as you start your time as volunteers in Namibia.

I suggest this approach — of beginning with the end in mind — because, as you just stated in your pledge, there will be difficult challenges during your time in Namibia as you endeavor to embody Peace Corps’ first two pillars of training Namibians and promoting a better understanding between our nations.

You will represent the United States throughout Namibia.  For most Namibians, you will literally be their only experience of the United States of America.  As you work in your sites, you are positioned to represent the ideals that Americans cherish as a nation:  freedom that allows us to choose our own paths in life and respect that values everyone equally and promotes diversity.  You also represent the friends and family who shaped you, the mentors and role models who inspired you.  And you, in turn, will be role models, especially for the young Namibians with whom you will interact, both professionally and socially.  I encourage you to be the role model they seek.  Remember that through your behavior, through the decisions you make, you will be modeling the United States for the Namibians with whom you live and work.

Thank you for your courage and dedication to join the legacy of partnership and friendship between Americans and Namibians that took root in the first days of Namibia’s independence in 1990.

Congratulations again, and thank you.