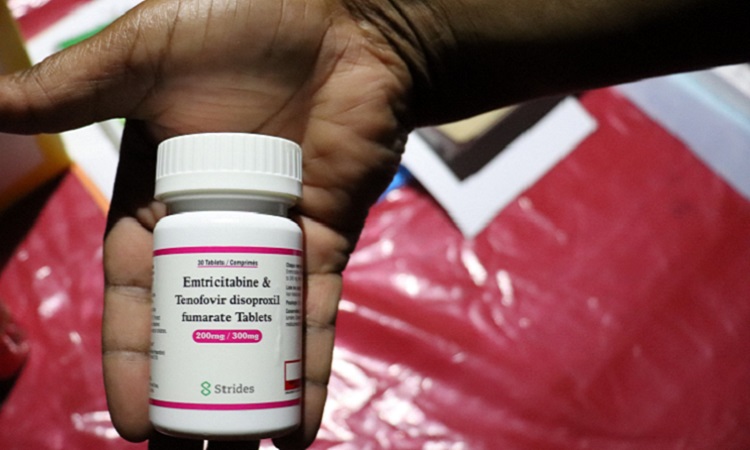 “Pre-Exposure Prophylaxis or PrEP keeps me safe from contracting HIV.”

These are the words of 40-year-old Mulela*, a resident of Makaravani location at Katima Mulilo in the Zambezi Region. Mulela was introduced to sex work by a friend as a last resort to provide for her three children aged 21, 15 and 13 years.

“I was not getting support from anyone. Before I started sex work, I used to go to the dumpsite and on some days, I would ask food from my friend. She later told me that she was only managing to feed her family with money she got from sex work and that I should do the same. It was not easy,” tells an emotional Mulela.

Sex workers, men who have sex with men, and transgender individuals are most vulnerable to contracting HIV. According to the 2021 UNAIDS Global AIDS Update, these “Key Populations” and their sexual partners accounted for 65 percent of HIV infections globally in 2020, yet they remain marginalized in terms of access to HIV services.

According to Mulela, making money from sex work is hard as she sometimes faces abuse from clients: “I am not happy doing sex work, it is a risk that I am taking. Sometimes clients do not want to use condoms and if they do agree to use a condom, they want to pay less,” she explains. But now that she is receiving PrEP medication, she feels much more confident and safer.

PrEP is an antiretroviral drug that helps HIV-negative people who are at an increased risk of HIV infection to stay HIV-negative. Proposing PrEP to people, like Mulela, who are at substantial risk of acquiring HIV can be beneficial to stay HIV negative because of the inability to consistently use other HIV prevention methods, such as condoms.

Mulela has been receiving PrEP and other health services, such as counselling, from the Key Populations Strengthening Technical Assistance and Response (KP-STAR) project since she was referred to the project by a peer sex worker.

KP-STAR is funded by the United States President’s Emergency Plan for AIDS Relief (PEPFAR) through the United States Agency of International Development (USAID) and aims to strengthen HIV prevention for Key Populations to reduce the incidence and mitigate the impact of HIV.

“Clients pay less when we ask them to use condoms. Sometimes I agree to having sex without a condom because I must feed my children. It is a risk that could get me infected with HIV which is why I prefer PrEP. When a client refuses to use a condom, I know that I am on the safe side because PrEP keeps me safe from contracting HIV,” she says, recognizing that PrEP does not prevent pregnancy or sexually transmitted diseases other than HIV.

To be effective, it is required that clients take PrEP daily and correctly. Mulela says she has been taking PrEP consistently. “I make sure that I take my medication every night because I want to stay healthy. I am not happy doing sex work, I just do it to care for my children.” She also still asks her clients to use a condom to reduce her risk of pregnancy and other sexually transmitted diseases.

Adhering to PrEP is also a decision made by 31-year-old Grace*, who started sex work at the age of 17. Unlike Mulela, Grace was forced into sex work to keep up with the lifestyles of girls her age and circumstances at home.

“I lost my parents and started getting boyfriends at a very young age, and I got my first child when I was just 15 years old. This forced me to quit school and every time I met a man, I would ask him how much he would give me,” Grace recalls.

“I do not miss taking my tablets. My children know that I am taking PrEP, so they always remind me whenever I forget because I drink too much alcohol,” says Grace.

It is, however, a different case with Mulela who chooses to keep her usage of PrEP from her family. Nevertheless, she does not hold back encouraging her peers to consider taking PrEP.

“I do not want my family to know that I am using PrEP because they might find out that I am doing this kind of business, but I always tell my friends to use PrEP especially when clients are refusing to use condoms. Condoms are good but some men tear them, and some refuse to use them,” she explains.

Grace also tries to link her friends through peer-to-peer referrals to KP-STAR Peer Educators for HIV services including PrEP.

“I always tell my friends that I am using PrEP to prevent myself from contracting HIV, I even bring clients to Peer Educators,” says Grace.

KP-STAR Site Coordinator for the Zambezi Region, Ophelia Samunzala, says clients who are part of the Peer Education program are provided with case management support where they receive routine screening on HIV, pregnancy, and sexually transmitted infections when they go for follow-up.