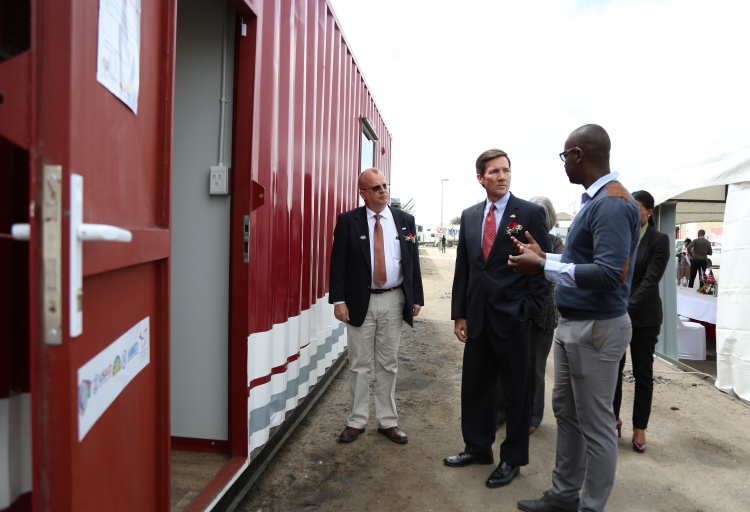 Good morning!  We are here in Walvis Bay today to recognize another major achievement by the Namibian government in the fight against HIV and AIDS in this country.  The achievement we’re marking today is another milestone in the provision of sustainable HIV prevention services through making Pre-Exposure Prophylaxis available for HIV-negative people who are at substantial risk of contracting the virus.

Around the world, the coverage of treatment for people living with HIV has increased substantially.  And yet, in spite of that increase, we continue to see new HIV infections occurring.  Last year alone, 1.8 million people were infected with HIV, and two-thirds of them were in sub-Saharan Africa.  In Namibia, more than 7,000 new infections occurred.  Do the math: that means on average that 19 people were infected with HIV every day in Namibia in 2016.  Numbers like that highlight the importance of effective HIV prevention.  Those numbers also highlight that we still have work to do to improve our HIV prevention strategies and interventions.

In 2015, the World Health Organization made a compelling recommendation for countries to offer the use of antiretroviral medication to people who are not infected but are at substantial risk of acquiring HIV.  The WHO recommended what the specialists call Pre-Exposure Prophylaxis, or PrEP.  Why did the WHO recommend PrEP?  Because PrEP is highly effective and has few side effects. The evidence also clearly shows that PrEP does not lead to an increase in risky sexual behavior.  That’s an argument that critics of PrEP occasionally put forward, but research and implementation science have proven that argument to be quite simply wrong.

The WHO’s data also show that PrEP is between 92% and 100% effective in preventing HIV infection.  That’s why here in Namibia in November last year, the Ministry of Health and Social Services included the WHO’s recommendation on PrEP in the National Guidelines for antiretroviral treatment.  That’s also why the U.S. government, through PEPFAR, is supporting the Ministry’s efforts to prioritize interventions like PrEP – because we agree with the WHO and the Ministry that interventions like PrEP are a vital part of a sustainable HIV response in Namibia.

So what exactly, you might ask, is PrEP?  It’s pretty simple.  PrEP is the use of antiretroviral medication – ARVs – by people who do not have HIV so that they can stay HIV-free.  The medication can be taken by anyone who has reason to believe that they are at an elevated risk of acquiring HIV:  for example, HIV-negative people who have sexual partners who are HIV-positive; or who have sexual partners whose HIV status is unknown; or who have a sexual partner who might also be having sex with other people.  But it’s important to note that, before being prescribed PrEP, a person must first commit to getting tested for HIV and commit to regular testing once they’re on medication.

Data today show that Namibia has made great strides in diagnosing people living with HIV and getting them on ARV treatment.  But work remains to be done, and access to treatment services for key populations remains very low in the country.  PrEP is a direct and effective way of helping people in those key populations.

I want to underscore, though, that no single intervention — and that includes PrEP — offers perfect protection from HIV.  PrEP is the latest addition to a package of high-quality HIV prevention interventions that are available to people in Namibia today.  Taking PrEP does not negate the importance of other measures like the use of condoms or voluntary medical male circumcision.  It is the combination of all those interventions that is moving Namibia step by step towards an AIDS-free generation.  And those interventions are available in this country thanks to the Ministry of Health and Social Services and its Directorate of Special Programmes.  They deserve a round of applause for their outstanding efforts to improve access to HIV prevention and treatment services for all Namibians.

Through combined leadership, the health ministry developed a comprehensive National HIV Strategic Framework that guides all of us working together in the HIV response, and spells out the need to scale up services for key populations in a meaningful and dignified manner.

The Namibian government first made PrEP available for a limited group of people starting in 2014.  And even now, the plan to expand the use of PrEP for all is still in its early stages.  It has been exactly three months since decentralization of PrEP started here in Walvis Bay, with the support of the Society for Family Health and the Walvis Bay Corridor Group.  Through this decentralized model, already more than 60 individuals are taking PrEP – and that’s a number we expect to increase steadily with the continued expansion of the program.

We are grateful that the Ministry of Health and Social Services has been in the lead to fast-track the roll-out of PrEP in Namibia.  To give you an idea how fast, in May of this year, just one month after a drug called Truvada was approved for prevention use by the Namibian pharmaceutical regulatory council, it was made available to all Namibians.

In closing, I want to express my sincere gratitude to the Ministry of Health and Social Services, our partners, the health care workers in the field, and everyone else who’s working to achieve our common goal:  to eliminate AIDS in the Land of the Brave.  Thank you!