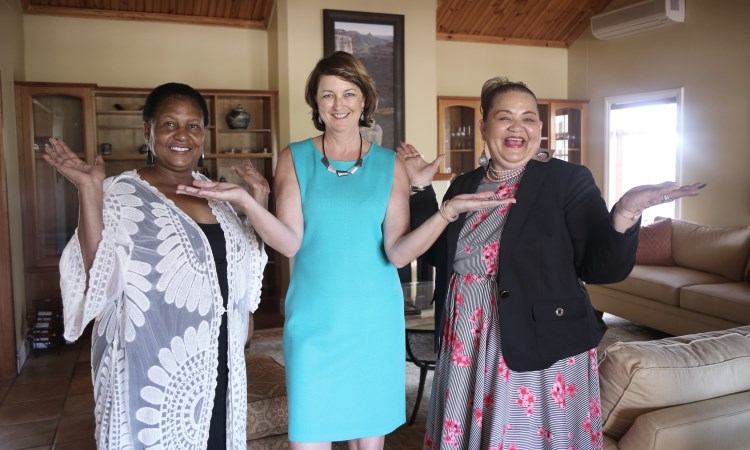 Good morning, and thank you for inviting me to join you in celebration of International Women’s Day.

Each of us is here today because we know that empowering women – economically, politically, and socially – is essential to creating sustainable and prosperous societies.  We strongly support Namibia’s theme for this year’s Women’s Day, “empowering people and ensuring inclusiveness and equality.”

This value is fundamental in Namibia, with Article 10 of the Constitution ensuring inclusiveness and equality.  Namibia has built upon this foundation, and demonstrated regional leadership in conforming with the SADC Protocol on Gender and Development.  By formalizing 50/50 gender representation and a “zebra” system into its politics, we now see a National Assembly that is 46% female – 48 of 104 members.

Namibia’s investment in women is yielding results and acclaim:

These successes do not come without hard work, dedication, and sacrifice.  I have been deeply impressed by the commitment Namibian women demonstrate to improving the future of their country and Africa as a whole.  I applaud the women who steward Namibia’s natural resources through management of community conservancies.  I marvel at energetic entrepreneurs and the new opportunities they create.  And I admire the role female Namibians play in helping to keep peace abroad, including as police officers deployed to United Nations peacekeeping operations.

The United States shares this core value of equality.  One of the Priority Actions of the U.S. National Security Strategy is to empower women, affirming specifically our conviction that “societies that empower women to participate fully in civic and economic life are more prosperous and peaceful.”

Acting on this conviction, in 2017 the United States became the first country to translate the United Nations Women, Peace, and Security agenda into national law.   And this year, the United States launched the Women’s Global Development and Prosperity Initiative, which addresses workforce development for economic empowerment, support for women entrepreneurs, and legal and policy reform to address historical limitations on women’s potential.

This initiative seeks to empower women worldwide to fully participate in their local economies and aims to reach 50 million women by 2025.  In so doing, we aspire to boost economics globally and to facilitate peace, security, and stability for all.  The United States undertook this initiative because women are equal, and they deserve control of their equity.

However, while recognizing the progress we have made, let us also acknowledge the areas where shared responsibility and greater collective action is needed to achieve gender balance.  For example, despite making up more than half the population in the United States, women represent disproportionately low percentages of top positions in law, medicine, academia, financial services, and the entertainment industry.  Even with the record number of women brought into political office by the United States’ 2018 elections, women still represent only 24 percent of all members of the U.S. Congress.  America needs to follow Namibia’s lead and increase female political representation!

To reach their full potential and contribution to society, women also need to be free and feel safe in their communities and their homes.  Gender-based violence is a violation of human rights that undermines the public health, economic stability, and security of nations.  Gender-based violence cuts across ethnicity, race, class, religion, education level, and international borders.

I join with those in Namibia who recognize that gender-based violence is “our story” and requires our collective action to see it end.

Even with the great successes women have had in the fight against HIV/AIDS, a Namibian woman age 20-24 is two to three times more likely to be HIV positive than a man her age.  Gender-based violence is a significant contributing factor.  Violence and HIV transmission are negatively impacting the dreams and aspirations of Namibia’s young women, and must be stopped.  To give girls and young women the support they need, the United States has partnered with Namibia to implement the PEPFAR DREAMS program, including here in Omuthiya.

DREAMS provides comprehensive solutions that go beyond health services to address the many factors that put girls and young women at risk, such as school drop-out, social isolation, economic disadvantage, and gender-based violence.  This approach has been highly successful, because it employs real-world solutions toward the goal of keeping adolescent girls and young women HIV negative, free of violence, and on track to achieve their goals.

As a global community, we know that countries become more prosperous by promoting women’s full economic participation and ensuring that women and girls are safe, educated, and healthy.  The United States will continue to support efforts to advance women’s equality, protect the rights of women and girls, and promote women and youth empowerment programs.

America’s partnership with Namibia is built on many pillars.  I am tremendously proud that women’s equality is one of them.  Thank you.