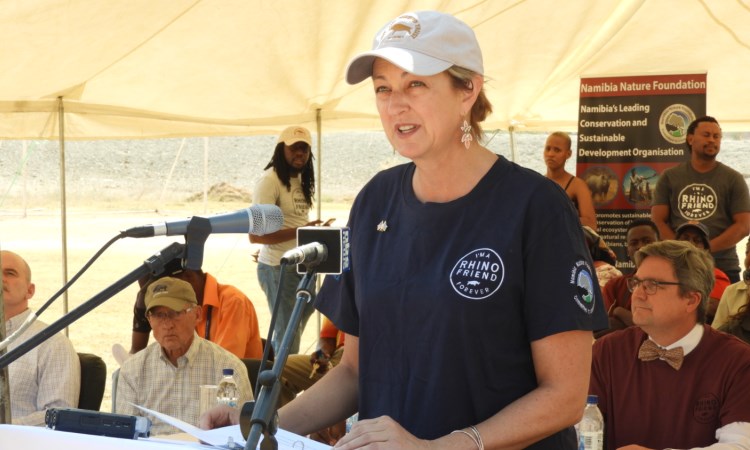 U.S. Ambassador Lisa Johnson highlighting the successful partnership between the United States and Namibia in protecting rhinos at World Rhino Day in the Khorixas stadium.

I am very happy to be here today with you all to celebrate World Rhino Day.  Many of you here are those who are responsible for protecting Namibia’s natural resources, including its rhinos, and you are to be congratulated on the Kunene region’s remarkable success in doing so in recent years.

Wildlife trafficking is a multi-billion-dollar illicit business that is decimating Africa’s iconic wildlife populations.  Many targeted species, such as the African rhinoceros, face the risk of significant decline or even extinction.  Between 2007 and 2018, over 9,000 African rhinos were poached.

Wildlife crime undermines Namibia’s economic prosperity and threatens the country’s natural capital resources.  It obstructs sustainable economic development, including the development benefits derived from legal, nature-based enterprises such as tourism. In Namibia, wildlife tourism is an increasingly important and growing industry that benefits both communities and the national economy.

Wildlife crime, including poaching, also erodes social stability and cohesion.  It impoverishes communities at the same time as robbing their cultural and natural heritage.  Communities that are dependent on natural resources are exposed to security threats and to the loss of their livelihoods and income.

The governments of the United States and Namibia have been working in close partnership to combat wildlife crime, including poaching and wildlife trafficking.

To fight wildlife crime, the United States and Namibia partner on several projects.  One, the “Combating Wildlife Crime in Namibia and the Kavango-Zambezi Area Project” (CWCP), funded by USAID, is a five-year initiative that began in 2017.   Among other objectives, it aims to increase the black rhino population in North West Namibia.  The project is being implemented by WWF Namibia in partnership with a consortium of NGOs.  Here in Kunene, that includes IRDNC, the Legal Assistance Centre (LAC), NACSO, The Namibia Nature Foundation (NNF), Save the Rhino Trust (SRT), and TRAFFIC.

The project focuses on community engagement to counter wildlife crime, strengthening anti-poaching and surveillance, and strengthening investigations and prosecutions, including through coordination and information sharing.

Other projects funded by the U.S. State Department Bureau of International Narcotics and Law Enforcement (INL) and the U.S. Fish and Wildlife Service support the Ministry of Environment and Tourism, NamPol, communal conservancies, and others in Kunene on rhino monitoring, surveillance, and protection, as well as on anti-poaching interventions, investigations, and prosecutions.

I am happy to report that our hard work together already is paying off.  I am so encouraged to hear that zero rhinos have been poached over the last two years in the north-western communal areas of Kunene.  This good news should give us all new hope and encouragement to keep working to save the rhino.

I want to congratulate the Ministry of Environment and Tourism, WWF, and all of its partners for this achievement.  From the onset, they recognized that active involvement of communities and building stronger relationships between communities, the private sector, conservation authorities, and law enforcement agencies is critical to success.

One of the successes thus far is the promotion of community pride, combined with awareness creation around wildlife crime.  This has proven to be key in mobilizing communities in the fight against poaching and wildlife trafficking.  Community pride has catalyzed and extended community wildlife stewardship, resulting in more eyes and ears on the ground that are monitoring and reporting acts of wildlife crime and poaching.

Events such as World Rhino Day are important in engaging communities, the private sector, and many other stakeholders, such as women and disadvantaged groups in community pride campaigns.

In addition to World Rhino Day, we also are fostering pride and raising awareness through workshops, theatre, education, and field excursions.  Just this year, our partners have reached over 12,000 people with these efforts, and we will keep going.

It is encouraging to see so many stakeholders present here celebrating World Rhino Day and raising awareness on the need to protect Namibia’s precious wildlife.  The United States is a committed partner in this cause. So, let’s continue to work together and make a real difference in protecting the rhino for the future of Namibia and Namibians.