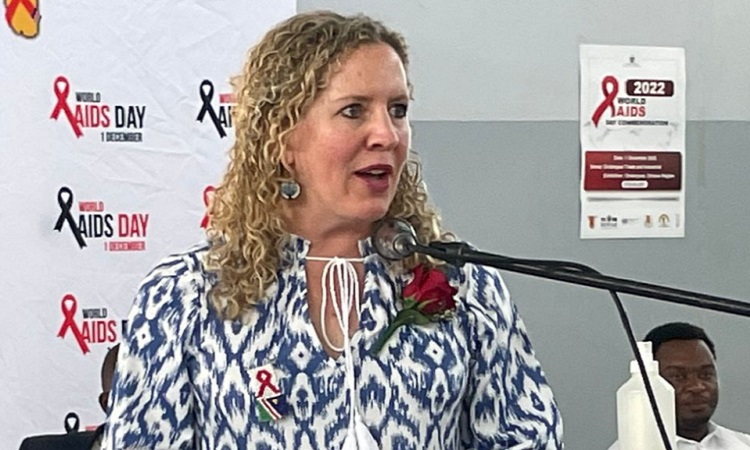 It is an honour to be with you today to commemorate this World AIDS Day.

The United States government remains committed to work with the Namibian government by “Putting Ourselves to the Test to Achieve Equity to End HIV”, which is the United States’ theme for this year’s World AIDS Day.

This theme underscores accountability and the connection between equity and ending HIV. If we are going to be effective in ending HIV in the United States and partnering with countries around the world to end HIV everywhere, we must follow an approach that is focused on advancing equity and supporting disproportionately affected communities such as children, adolescent girls and young women (AGYW), and key populations.

Overall, the U.S government has contributed over N$18 billion Namibian dollars, for HIV/AIDS in Namibia through the United States President’s Emergency Plan for AIDS Relief (PEPFAR) since 2005. PEPFAR remains the largest commitment ever by one country to address a single disease. We are also the leading donor for the Global Fund to fight AIDS, tuberculosis, and malaria.

For the year 2022, the Namibia PEPFAR program received $94 million U.S. dollars, equivalent to over N$ 1.5 billion Namibian dollars to fight HIV in the country. With this funding, we built on existing programs as well as introduced new and innovative approaches to address prevention, care, and treatment in the country all while working with the Namibian government.

But this funding won’t accomplish our goals if we don’t advance equity in healthcare. That’s why we are partnering with the Ministry of Health to provide prevention services such as Pre- Exposure Prophylaxis (PrEP) to give at risk populations such as adolescent girls and young women (AGYW), men who have sex  with men (MSM), and sex workers the opportunity to protect themselves against HIV.

PEPFAR support is targeted at making services convenient and adapted to people’s needs. And all of us here care about making sure they reach ALL the people who need them.

Our partnership is constantly evolving to ensure that the Namibian population continues to have access to the best commodities and services for HIV prevention and treatment that are available.

To sustain the HIV response, countries will require bold political, programmatic, and financial leadership. PEPFAR supports partner countries such as Namibia, and communities to ensure people of all ages, genders, and population groups have equitable access to life-saving HIV prevention and treatment services.

Two weeks ago, I had the pleasure of swearing in 14 Peace Corps Volunteers to be placed in different regions around Namibia to work with local partners to advance development and health goals. This investment  highlights the importance we place on the role of communities in achieving access to HIV prevention and treatment – not just with money but with people on the ground living and working in communities.

Our strong partnership has helped replace death and despair with vibrant life and hope, and tragedy with triumph. You all here make it clear why the PEPFAR program in Namibia is one of the most successful in the world – everyone – the government, the media, civil society, community leaders, etc is playing a meaningful role in trying to end the threat of HIV.

But our work is not finished. To sustainably control the HIV/AIDS pandemic, the U.S. government is deeply committed to help end the inequalities that stand in the way and result in gaps in services, which have been exacerbated by the COVID- 19 pandemic.

The threats to controlling the global HIV/AIDS pandemic are real. Many countries with high disease burden have reached epidemic control of HIV or are on track. Namibia is one of them. However, this progress can be lost without focused, sustained, and equitable action.

We cannot achieve our goal to end HIV as a global health threat if we deny people’s human rights or sexual and reproductive rights, or if we allow discrimination against people living with HIV or those who are most vulnerable to acquiring HIV. Namibia has taken one very proactive step that is becoming a best practice: providing cross-border care for Angolan nationals living near the border. This is not only a good thing to do for humanitarian reasons, but has a direct impact on Namibia’s public health.

Our health as a community depends on the healthcare of individuals. By ensuring that everyone who makes up our communities, including friends, family, people we might disagree with, and community members from Angola are able to access the healthcare they need, we reduce the risk of disease for all.

Pushing back against discrimination and stigma, and pushing for equity will make everyone healthier and safer.

The U.S. government is committed to continuing to collaborate with the Namibian government to erase barriers that prevent the provision of and access to equitable, inclusive, and accessible high quality HIV services and threaten the human rights of individuals including the LGBTQI+ community, sex workers, women and girls.

Together with the Namibian government, PEPFAR-supported programs have safely ensured access to HIV services, including core prevention and treatment services that were affected by early COVID-19 mitigation measures.

On this World AIDS Day commemoration, we remain committed to support Namibia’s theme of “Strengthening of community engagement in the HIV response in Namibia.

May we work towards health equity for priority populations and continue to sustain the HIV response through our transformational partnerships that are guided by science.

We commit to this partnership and together, we will reach sustainable HIV epidemic control.