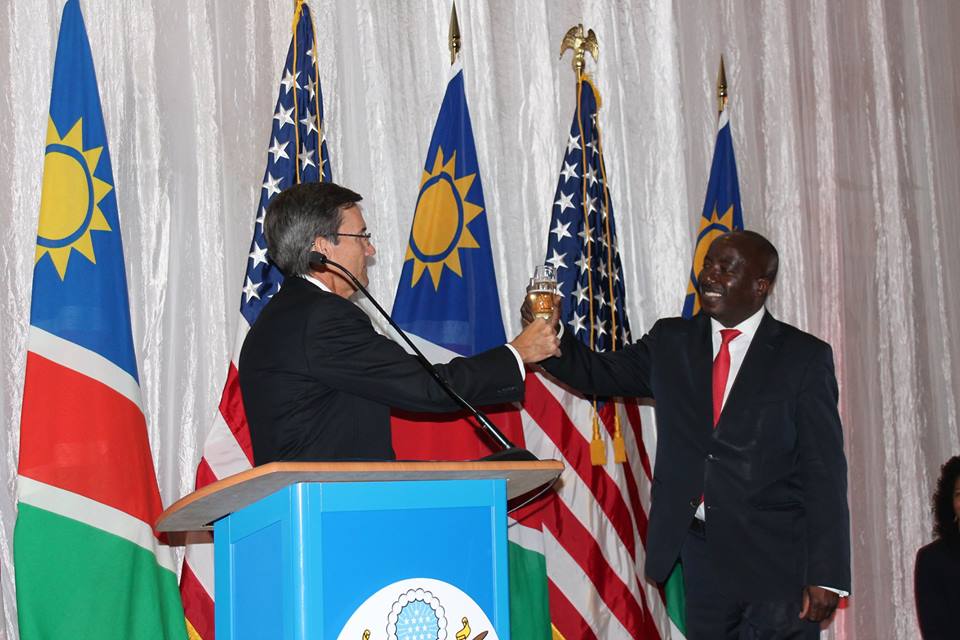 On our Independence Day, as Americans we celebrate our collective history as we reaffirm our commitment to the fundamental rights that our Declaration of Independence famously called life, liberty, and the pursuit of happiness.  We also reaffirm our commitment to the belief that what binds our nation together is not color, or religion, or family origin.  What binds us as Americans is the certainty that all people, everywhere, are created equal, are endowed with equal rights, and should have equal opportunities.

I believe we share that certainty with the people of Namibia.  It is in the spirit of our shared values and aspirations that Namibians and Americans work together, as partners and friends, for a better world, for greater economic opportunity, and for the chance to enjoy a peaceful and healthy life.

Since we gathered together last year to celebrate our Independence Day, my wife, Mindy, and I have traveled more than 30,000 km across this vast country, meeting its people, experiencing its unique physical beauty, and learning about its rich and diverse cultures.  We have been able to see for ourselves some of what makes Namibia unique and strong.  We have also seen for ourselves some of the challenges this country faces.

At our Independence Day celebration last year, I committed to work, together with my talented and dedicated Embassy team, to support Namibian leaders – whether in government, civil society or the private sector – who are seeking Namibian solutions to Namibia’s challenges.  Tonight I am pleased to be able to say that American support for Namibian solutions has brought some key successes in the past year.  To all of our Namibian partners who have realized those successes – and many of you are here tonight – I want to say, congratulations and thank you.  To the rest of you, I’d like to tell you a little about what American support for Namibian solutions has accomplished in the last year.

One area where American support for Namibian solutions has changed people’s lives is human trafficking.

A few hours ago in Washington, DC, Secretary of State John Kerry announced the publication of the State Department’s 2016 Trafficking in Persons report.  Many of you know that human trafficking in Namibia has received increased attention this past year.  Fewer may be aware of what the Namibian government has done to address it:  prosecuting suspected traffickers, moving to finalize anti-trafficking legislation, identifying and sheltering trafficking victims, and consulting with NGOs and experts during the year.  A national committee, chaired by the honorable deputy prime minister, took the lead and convened a technical committee charged with combating trafficking.  And, with American support, the Namibian government increased prevention efforts, conducted anti-trafficking training, and promoted public awareness of the problem.  All of these significant efforts to combat human trafficking are recognized in the just-released report, and have earned Namibia an upgraded rating from last year.  That is a major success, and the Namibian government deserves congratulations for its efforts to address a world-wide problem.

In the past year, American support for Namibian solutions has also changed the lives of more young Namibian leaders.

As I speak to you tonight, 20 young Namibian leaders are in the United States representing their country on the Mandela Washington Fellowship, President Barack Obama’s signature leadership exchange program.  Those 20 are more than double the number of Namibians who participated in 2015.  They are on a journey that will change their lives.  And Namibia will reap the benefits.  The Namibian Fellows will return in August and September with newfound global connections and an expanded network across the continent.  They are among 1,000 young African leaders living and studying on U.S. university campuses to enhance their proven leadership skills.  Their studies cover subjects as diverse as small enterprise development and public management.  To give you an example, one Fellow is studying the interaction between public and private finance with the aim of improving Namibian state finance systems with the help of the Namibian private sector.  The experiences and knowledge that the 20 acquire will empower Namibia’s newest Mandela Washington Fellows to affect positive, democratic change that advances this country’s development goals to increase peace and prosperity for all.

In the past year, American support for Namibian solutions has continued to bring Namibia closer to an AIDS-free generation.

Just last week, we recognized the success of the health team in Okongo district, in Ohangwena, for their innovative approach to healthcare for AIDS patients.  It’s a Namibian approach that the World Health Organization believes should be copied around the world.  The United States has been Namibia’s committed and steadfast partner in the fight against HIV and AIDS since 2003.  Then, nearly one in four Namibian adults were infected.  Today that number is one in seven.

The next two years will be crucial in our common response to HIV.  The experts tell us that Namibia is getting close to controlling its HIV epidemic.  That’s right:  The goal of epidemic control – of achieving an AIDS-free generation in Namibia – is within reach.  That is why the United States has decided to redouble its efforts in Namibia over the next two years.  We want to be standing side by side with the Namibian government when it reaches the target it has set to become the first African country to meet the 90/90/90 goal.  That means identifying 90% of all people who are HIV positive, getting 90% of them onto lifesaving anti-retroviral drugs, and achieving viral suppression in 90% of the people taking those drugs.  That goal, when we reach it – and I do believe we can and will reach it – will be the result of applying Namibian solutions to a Namibian challenge with American support.

Over the next year, American support for Namibian solutions will also continue to help preserve Namibia’s unique environment and resources.

The past year saw a marked increase in the poaching of Namibian wildlife, especially endangered rhinos.  The Namibian government has moved energetically to address the problem, and we have sought to help with training and equipment.  In this next year, American support will help Namibia as it sets up, trains and equips a specialized anti-poaching unit.  At the same time, we will continue to work with the government to support Namibia’s uniquely successful program of managed conservation of its wildlife.

The other big environmental challenge – and one that affects us all – is the drought that has stricken much of the country, including Windhoek.  In the past year, we have supported Namibian solutions to this challenge in the north through digging of boreholes, installation of weather monitoring equipment, and training in drought-resistant agricultural techniques, to name just a few, and we will expand our support in the coming year in response to His Excellency President Geingob’s declaration this week of a drought emergency.

Closer to home and in response to the dwindling water supply in Windhoek, my colleagues and I at the U.S. Embassy launched a campaign to reduce the amount of water we use at home.  Thanks to the commitment of my Embassy team and their families, since last October we’ve reduced water consumption at our 43 diplomatic residences by nearly two-thirds.  In fact, one of the reasons we all find ourselves this evening in these elegant surroundings and not in my garden is that I didn’t want to ask you all to stand on our dead grass or risk falling into our nearly-empty swimming pool!  The water situation in Windhoek affects all of us who live here, and my Embassy team and I are committed to conserving water as our personal contribution to delaying as long as possible the devastating impact of water shortages.  We want to join our Namibian hosts and neighbors in conserving this vital resource together.

One area where I am particularly proud of what we are doing to support Namibian solutions is in the work of the 141 Peace Corps Volunteers in this country.  No relationship better reflects our tradition of partnership than the relationship that exists at the most profound level in the most remote places of Namibia – the relationship between Peace Corps Volunteers and their host families and colleagues.  My wife and I had the pleasure a few nights ago of hosting a group of Volunteers who are halfway through their service in Namibia.  They glowed when they talked about the warm, open, friendly way they’ve been embraced by their new communities, and were filled with stories about the incredible range of projects they are working on with those communities, from spreading the word about the importance of getting tested to helping small business owners get resources for their enterprises.  Each of our Peace Corps Volunteers, whether working in health, education or community economic development, from Luderitz to Katima Mulilo, has achieved successes in the past year, and I am confident the coming year will bring even more.

In this spirit of the partnership between our two countries, I would like to propose a toast on behalf of President Barack Obama and the people of the United States of America:  To the continued good health and success of His Excellency Dr. Hage Geingob, President of the Republic of Namibia, and the governments and people of our two great nations.