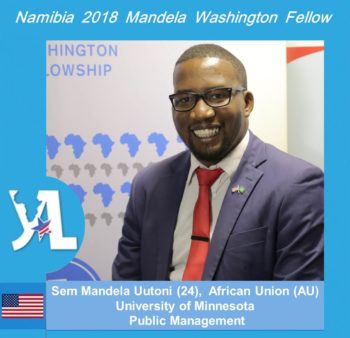 Sem Mandela was part of the Third Session of the Namibian Youth Parliament in 2011 and he founded the Oshakati Junior Town Council the same year.  Sem Mandela is an Atlantic Dialogues Emerging Leader (2017); UNESCO-APCEIU GCED Leader (2016); Fellow with Aspire Academy (2016) and a Fellow with the Preparing Global Leaders Institute (2016).  He is a Founding Member and Head of Legal and Business Development at Truth Tone Publishing and Review, a Namibian Publishing Company.

After the fellowship, Sem Mandela will establish a Leadership Institution which will provide a platform for young people to develop and hone their potential, empowering young Namibians to be active contributors to socio-economic progression in their communities.