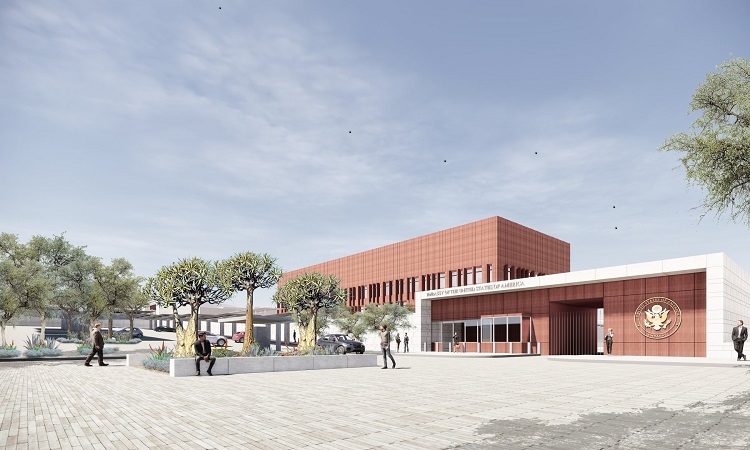 Design for our new Embassy compound in Windhoek.

Environmental sustainability has been a cornerstone element of the design process for the U.S. Embassy new facility in Klein Windhoek. We have ensured the new embassy compound will include renewable energy through solar panels, minimize water usage, and incorporate indigenous trees and plants, including as much as possible some currently on the site. This week, further preparation of the grounds began in anticipation of the construction and opening of a new, state-of-the-art embassy.

Our efforts to preserve as many of the existing trees and plants as possible began in late 2018. In February 2019, we had a local nursery conduct a survey of the grounds to identify and mark protected trees and plants. We later contracted a leading Namibian botanist to map the locations and assess the viability of relocating the flora. Regrettably, given the shallow root systems caused by the underlying rock bed, it was determined by Namibian experts that most of the trees could not be transplanted. However, the aloes on site were identified as having good potential to be successfully replanted. As many aloe plants as possible will be saved and either incorporated into the landscaping or donated locally.

Unfortunately, this work required removal of the trees that were not good candidates for transplant. Also, all invasive species on the property are being removed and disposed of properly. The contractor has received all the required permits and permissions from the government of Namibia to carry out the work being undertaken.

The contractor leading the construction will donate to Namibia new trees to off-set the impact of those that had to be removed for the new buildings. A local firm has been contracted to landscape the grounds when the buildings are complete, and the new Embassy will use only indigenous tree and plant species for that landscaping. Namibia’s spectacular indigenous trees will frame the new Embassy.

We are grateful for the counsel Namibian experts have provide as we work to preserve as much flora as possible. We share their deep care for Namibia’s natural resources. We are fully committed to preserving all the trees and plants that indeed can be preserved. For those that cannot, we look forward to watching the next generation of Namibia’s beautiful indigenous trees grow on the new U.S. Embassy compound.