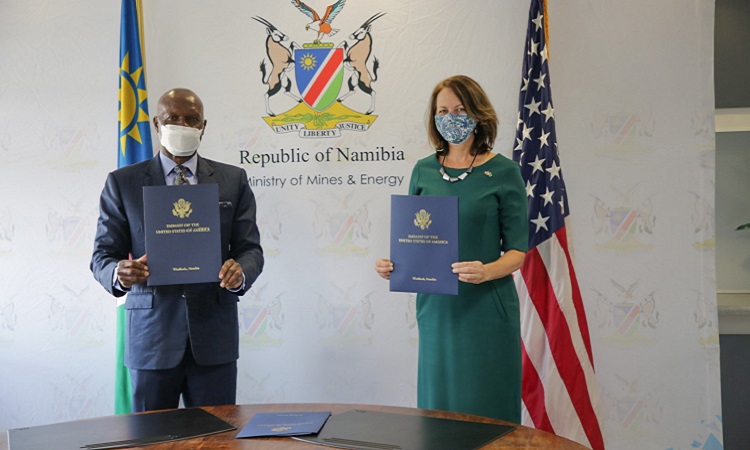 All partners in the Mega Solar project signed a memorandum of intent this month. Ambassador Lisa Johnson joined Minister of Mines and Energy Tomas Alweendo to commemorate Namibia’s signing.

Windhoek – On April 22-23, President Biden hosted a virtual Leaders Summit on Climate to catalyze global ambition to address the climate crisis. The Summit convened world leaders to galvanize efforts to keep the vital goal of limiting warming to 1.5 degrees Celsius within reach. The Biden-Harris Administration selected the Mega Solar Project as an outcome of the Summit.

Mega Solar is a partnership between the Governments of Namibia and Botswana, and others, which is expected to generate up to five gigawatts of solar power and to avoid an estimated 6.5 million tons of CO2 annually – the equivalent of taking almost 1.5 million cars off the road.

The Mega Solar project is a part of USAID’s Power Africa Initiative, which is committed to assisting the southern Africa region transform from reliance on fossil fuels to clean energy, enabling a path to decarbonization.

A memorandum of intent was signed between all partners this month.

“I am very excited that Namibia, Botswana, the United States, the World Bank, the International Finance Corporation, and the African Development Bank have taken important steps forward together on the Mega Solar Project,” U.S. Ambassador Lisa Johnson said.  “Mega Solar will directly advance a goal set forth in His Excellency President Geingob’s Harambee Prosperity Plan II for Namibia by achieving a secure and cost-effective energy supply.”

“When fully realized, Mega Solar could be one of the largest solar parks in the world, generating 3,000 – 5,000 megawatts of energy,” Ambassador Johnson added.  “This could transform Namibia and Botswana into two of the globe’s most significant producers of solar power, enough to begin exporting renewable energy to the southern Africa region.  Beyond the economic potential, Mega Solar will help decarbonize southern Africa and will make a significant contribution to global efforts on climate change.”

Mega Solar’s initial goal is to provide additional power from solar photovoltaic and concentrated solar thermal technologies to meet local demand, an ultimate benefit of the collaborative efforts of the Mega Solar partners in strengthening the institutional and technical capacity as well as legal and regulatory frameworks of the focal countries.

“Unlocked by this partnership is the extraordinary development potential for life and globe changing clean energy, emanating from southern Africa on a pioneering scale of massive productive use,” Mark Carrato added.

The Power Africa Initiative – established by the 2013 Electrify Africa Act – is making a difference across sub-Saharan Africa by improving lives, supporting economic growth, and combating climate change through improved access to clean, reliable, and affordable electricity.

Since 2013, Power Africa has leveraged the combined expertise of the private sector and 12 U.S. government agencies to bring 12,000 MW –  representing a USD 22 billion investment –  to financial close.

Already, Power Africa has connected more than 20.8 million homes and businesses to on- and off-grid solutions, bringing first time electricity to 98 million people across sub-Saharan Africa.

Power Africa, though its partnerships and comprehensive technical assistance presence, is uniquely positioned to advance the Biden-Harris Administration’s objectives to support economic growth and decarbonization across sub-Saharan Africa, a region critical to fighting climate change.