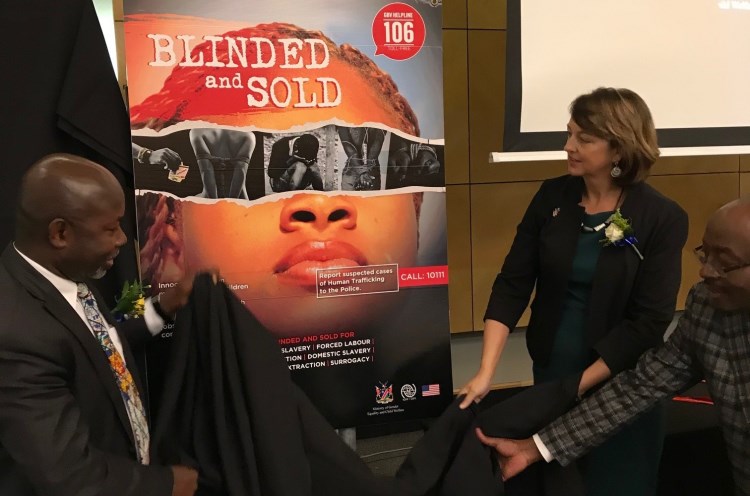 Good morning, and thank you for inviting me to join you for the launch of the Trafficking in Persons National Referral Mechanism and awareness-raising campaign.

I am honored to join the Namibian government as it launches a key component of the Combatting Trafficking in Persons Act – the National Referral Mechanism – which will help ensure that victims of trafficking are quickly detected and receive the services that they need.

When governments, like Namibia, create strong, comprehensive anti-trafficking laws, they are telling criminals:  We will not tolerate this, and you will face justice.

There are an estimated 25 million victims of human trafficking throughout the world, trapped in a multi-billion dollar industry that weakens the rule of law and strengthens criminal networks.  We appreciate that Namibia is a strong partner in combatting this threat.  Many of you here today are spearheading Namibia’s efforts across various sectors, and I would like to recognize you and encourage you to continue your challenging and crucial work.

To combat human trafficking, we know it is important that communities build multi-stakeholder partnerships across all levels of government, from the national to the local, and between law enforcement, service providers, trafficking survivors, and other key community actors.

The National Referral Mechanism highlights the strength of these partnerships in Namibia, detailing the roles and responsibilities of the many officials, service providers, and community actors who are working with victims of trafficking in this country.  By formalizing these procedures, the government of Namibia has made a commitment to a victim-centered approach to combatting trafficking.

Despite its global reach, human trafficking takes place locally – in a favorite hair salon or restaurant; in a neighborhood home or popular hotel; on a city street or rural farm.  Informed citizens are essential to identifying cases of human trafficking, and governments should take proactive steps to make communities aware of trafficking indicators.

The national awareness-raising campaign being launched today aims to do just this.  Through posters, social media, radio and television, this campaign will highlight for all Namibians that the crime of human trafficking does not discriminate – anyone can be a victim.

It will also focus on trafficking methods – traffickers will use any means necessary to coerce or trick their victims into forced labor or sexual exploitation.  The more people this campaign reaches, the better the chances that Namibians will be able to identify human trafficking cases and prevent people – possibly even themselves – from becoming victims in the future.

The Namibian government is to be congratulated for addressing human trafficking head-on and for taking proactive steps to inform its citizens and provide services to victims.  As we look to the year ahead, I offer the U.S. government’s continued partnership with Namibia to fight human trafficking.

Thank you again for the opportunity to join you today, and thank you all for your continued work on this important issue.

The song “Tricked and Sold,” by Sally Boss Madam, encourages Namibians to be “safe, awake, and strong” when it comes to trafficking, to think about the future, and to beware of false promises from traffickers.