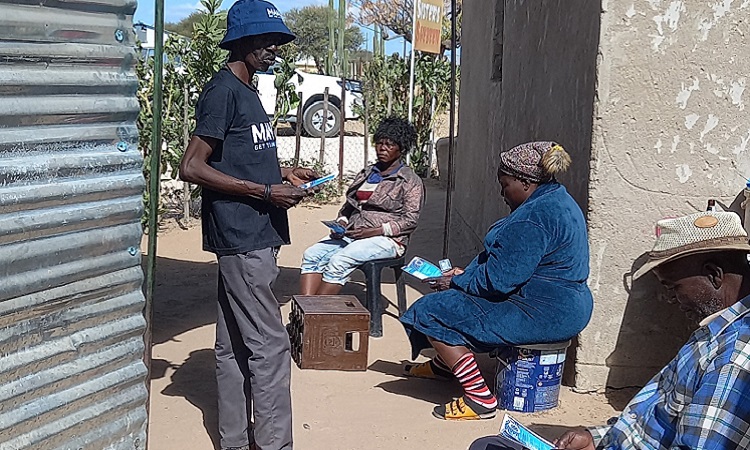 Norich Uararakana Kaurika(standing) during a VMMC community mobilization session. For the 44-year-old, circumcision is no longer just a matter of tradition but of national health.

Norich Uararakana Kaurika, 44, is a respected traditional circumciser from Okakarara, a small town in Namibia’s Otjozondjupa Region. Norich takes pride in performing circumcisions because, for his tribe (Ovaherero), tradition dictates that every young man should be circumcised not only as a rite of passage but also to prevent infections and improve hygiene.

He explains the traditional role the fraternity of boys circumcised in the same year is playing for all of them: “In difficult times, the men in the group will become each other’s pillars of hope. They keep each other accountable for staying on the straight and narrow during marriage and other challenges in life.”

With an HIV prevalence of 8.45% among the general population living with HIV (2022 Spectrum Model), the Otjozondjupa Region is one of 12 priority areas for Namibia’s Voluntary Medical Male Circumcision (VMMC) scale-up plan in support of the Health Ministry’s HIV response. Research shows that male circumcision reduces HIV transmission in men by 60%, and it is an important HIV prevention measure, especially when combined with other approaches.

The Ministry of Health and Social Services partners with the U.S. Government-supported Scaling up Access For Expanded (SAFE) VMMC activity to circumcise 80% of the Namibian male population from15 years and older. The program is funded by the President’s Emergency Plan for AIDS Relief (PEPFAR) through the United States Agency for International Development (USAID) and implemented by Abt Associates.

Community mobilization and interpersonal communication are essential for engaging the population to raise awareness and understand VMMC services. This includes the recruitment of community mobilizers with the assistance of local Constituency Councilors.

Before he attended the SAFE VMMC training, Norich was unaware that circumcision reduces the risk of HIV transmission. He became a proud participant of the community mobilizer training where he learned about the importance of circumcision in the fight against HIV.

“I learned a lot. For instance, I now know that circumcision can be done at any time of the day and throughout the year,” Norwich explains.

The part-time farmer and VMMC mobilizer encourages young boys and men in his community to take advantage of free HIV prevention services, books clients and refers them to free VMMC outreach services. Since his training, 13 of Norich’s clients have been successfully medically circumcised, six from Okakarara and seven from Otjiwarongo.

“I decided to join as an advocate for the VMMC program because information to understand the process and benefits of circumcision is key, and because it is no longer just a traditional practice but a crucial national HIV prevention strategy,” says Norich.