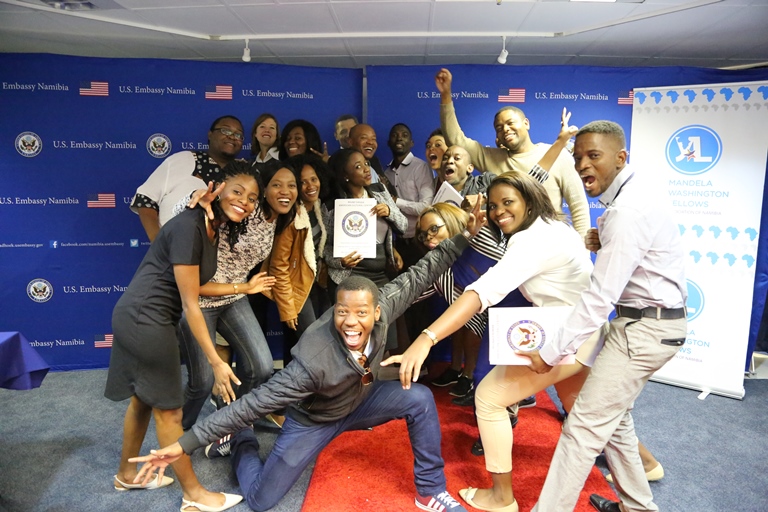 Three Namibian young leaders received a personal surprise Tuesday, March 22 when U.S. Ambassador Thomas Daughton approached them at various locations around Windhoek to inform them that they have been selected from among 425 Namibian applicants to participate in the 2016 Mandela Washington Fellowship in the United States.  Others received a personal phone call from Ambassador Daughton live from the studio of Radio Energy.

Bernardus Harageib, 27, from Usakos, learned while at Street Cuisine Café.  He was speechless.  Kileni Fernando, 26, from Tsumke, heard the news while at the American Cultural Center Library.  She explained her motivation for applying, “I just want to get experience and to meet people. I just would like to know about other organizations and also learn about other peoples’ cultures.”  Anel van der Vyer, 25, from Windhoek, was surprised at her workplace surrounded by colleagues. “No, you’re joking.  That is so exciting. Wow,” said an incredulous Anel.

Other Fellows learned that they had been selected via personal phone calls by the U.S. Ambassador live from the studios of Radio Energy.

Reactions ranged from speechlessness to screams of joy and gratitude for the opportunity.  Ambassador Daughton said to the Fellows about the program, “President Obama said recently that the Mandela Washington Fellowship is one of his proudest accomplishments.”

Namibia’s Twenty 2016 Mandela Washington Fellows and leadership tracks in which they will study: