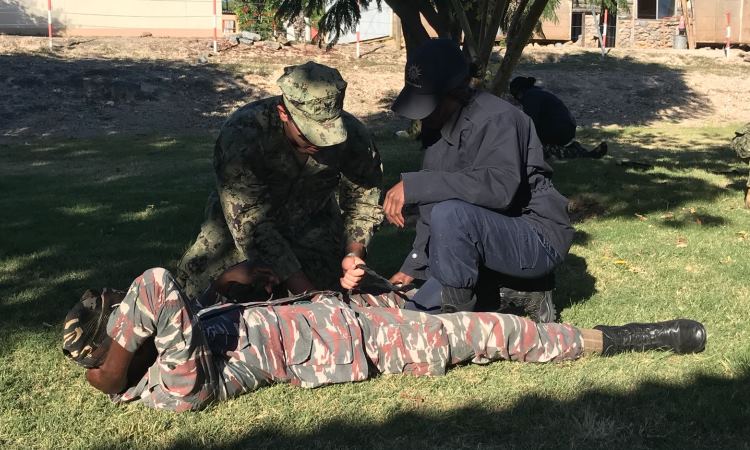 Members of the Namibian Defense Force and the Namibian Police Force are provided combat casualty care training facilitated by U.S. Africa Command in Namibia, May 24, 2018.

U.S. Africa Command recently facilitated the training of 15 Namibian personnel in the disposal of explosive ordnances as part of the U.S. Government’s Humanitarian Mine Action (HMA) program. Training was provided to 10 members of the Namibian Defense Force (NDF) and 5 members of the Namibian Police (NAMPOL). All 5 NAMPOL students were female. The training took place at the NDF military base at Otavi and lasted from May 7 to 31. It was performed by four U.S. Navy instructors with the main focus placed on detection, identification, and disposal of explosive remnants of war, to include landmines, grenades, rockets, and artillery shells. Medical training, including first-aid, self-aid, and buddy care, was also provided. Each participant received a Certificate of Completion for the Explosive Ordnance Disposal (EOD) Level 1 Course of Instruction.

The HMA program provides humanitarian mine action assistance to countries suffering from the presence of persistent landmines, which maim and kill innocents, obstruct emergency assistance activities, hamper economic development, and impede free movement of citizens. The extreme danger of unexploded ordnances in Namibia was seen at the end of May, 2018 when an 11-year-old boy died in the Ohangwena Region after a grenade that he and other children were playing with exploded. Three other children between the age of four and seven were injured.

Training through the HMA program is held twice a year and the next iteration is tentatively scheduled for 10 September through 5 October 2018. “We appreciate the hospitality of the Namibian Defense Force in hosting the U.S. Navy training team, and are honored to be a part of the enduring cooperation between U.S. Naval Forces Africa and the NDF and NAMPOL,” said Lieutenant William Greathouse who was the team leader during the EOD training.

U.S. Africa Command, headquartered in Stuttgart, Germany, is one of six of the U.S. Defense Department’s regional military headquarters and has administrative responsibility for U.S. militarysupport to U.S. government policy in Africa, to include military-to-military relationships with 54 African nations.