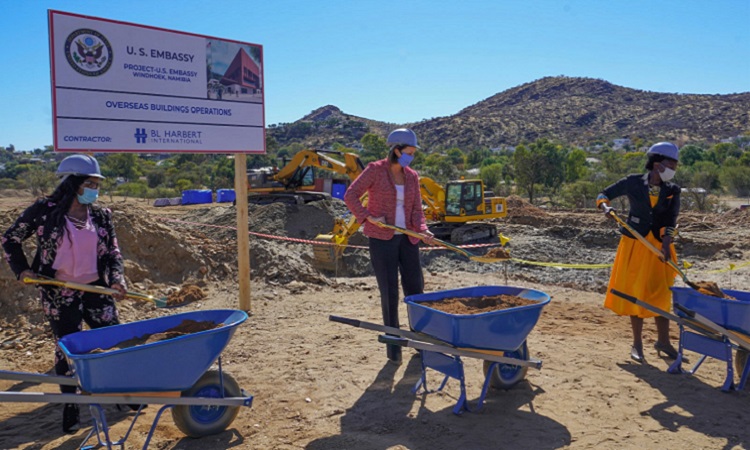 At the groundbreaking ceremony of the new U.S. Embassy Campus in Klein Windhoek is from the left the Deputy Minister of International Relations and Cooperation, Jenelly Matundu, the U.S. Ambassador to Namibia, Lisa Johnson, and Mayor of the City of Windhoek, Fransina Kahungu.

Windhoek – U.S. Ambassador Lisa A. Johnson welcomed Deputy Minister of International Relations and Cooperation Namibia, Honourable Jenelly Matundu, and Mayor of Windhoek, Her Worship Fransina Kahungu to the site of the new U.S. Embassy Campus in Klein Windhoek for a historic groundbreaking ceremony today.  Ambassador Johnson introduced to Deputy Minister Matundu and Mayor Kahungu the design of the modern, state-of-the-art new embassy campus before the three ceremonially broke ground on the project.

Ambassador Johnson called the building of a new U.S. Embassy “an investment by the United States in our 30 year relationship with Namibia,” saying the facility would be the future platform from which the two countries would partner on issues from health to trade to protecting Namibia’s wildlife for decades to come.

Completion of the new U.S. Embassy campus is scheduled for 2023.  Its design, Ambassador Johnson explained, will evoke Namibia’s beautiful landscape, featuring materials including red sandstone and light-colored limestone.  Landscaping will use exclusively indigenous trees and other plants, and the facility will make use of solar power to generate 50% of the main chancery’s power needs.

In her remarks at the groundbreaking, Ambassador Johnson highlighted how both Americans and Namibians are building the new Embassy.  The U.S. construction firm BL Harbert is already employing more than 200 Namibians on the site.  During the three years of construction, more than 2,000 Namibians will be employed at various stages.

Campus construction will significantly benefit the local economy, the Ambassador explained.  In addition to job creation, the U.S. construction firm currently is procuring goods and services from more than 50 Namibian companies.  The project is already injecting more than $700,000 US dollars (NAD 11.5 million) into the local economy each month.