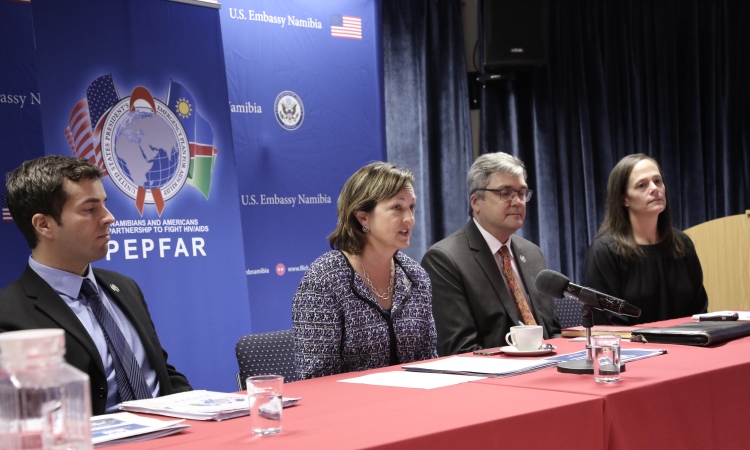 Thank you for attending this important media briefing today.  I appreciate your interest in this life-saving work that the United States government undertakes jointly with the Namibian government.

The United States President’s Emergency Plan for AIDS Relief (PEPFAR) was enacted on May 27, 2003, and began its work in Namibia in 2005.Our commitment remains unwavering.

Events such as today’s media briefing give us a chance to highlight the amazing work that has been achieved in addressing the HIV epidemic in the Namibia.  The U.S. government and the Namibian government have a strong partnership on HIV, and that is what has made this program so successful.

Today, we can proudly share that Namibia has continued in its successes. As of the beginning of 2019, estimates show 94 % of adults with HIV know their HIV positive status, 96% of those who know their HIV-positive status are on treatment, and 95% of those on treatment are suppressed.  These results are a true testament to how hard Namibia has been working to reach epidemic control.

Current year USG funding is nearly U.S. $72 million.  For next year, we will increase funding to nearly U.S. $82 million.  Since the beginning of PEPFAR, the U.S. government has invested nearly U.S. $1.2 billion in HIV programming in Namibia.

I would like to highlight the important role the media plays in combating HIV.  With accurate data and information, the media helps Namibians across the country make better health choices. Your diligence, integrity, and skills in accurately reporting on HIV in Namibia are helping bring the epidemic to an end.

I want to leave you with one thought today:  U=U.  That means Undetectable = Untransmittable.  If a person is HIV positive and takes their HIV medication daily, the virus in their body will become suppressed and undetectable.  That means that they cannot transmit HIV on to others.  And that is the key to epidemic control.

PEPFAR will continue to use the latest data and science to direct resources where the burden of the HIV epidemic is largest, the need is the highest, and the dollars are most efficiently used.

The HIV fight is for all of us.  We need to continue to work together to assure the health of the Namibian people.