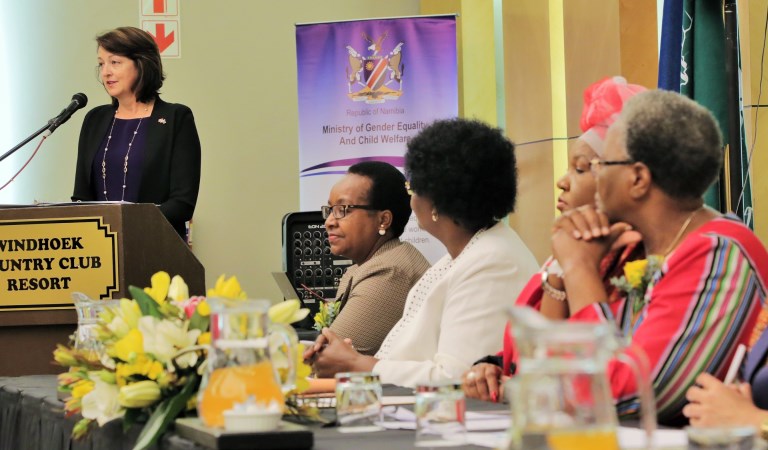 Good morning! I’m pleased to be here to help commemorate the World Day against Trafficking in Persons under today’s theme of responding to the trafficking of children and young people.

And I am honored to join the Namibian government in standing in solidarity with all victims of human trafficking and committing to end this abhorrent practice wherever it may occur. Events like this serve both to raise community awareness and to stiffen our resolve to continue the fight.

U.S. Secretary of State Pompeo recently affirmed, when launching the U.S. government’s annual Trafficking in Persons (TIP) Report, that “Modern slavery has no place in the world.” In this global fight, we appreciate that Namibia is a strong partner. Many of you here today are leading Namibia’s efforts, and I would like to recognize you and encourage you to continue your good work.

Each year, the U.S. Trafficking in Persons report explores a theme in depth. This year’s theme was “Local Solutions to a Global Problem: Supporting Communities in the Fight Against Human Trafficking.”

Over the past year, Namibia has made significant efforts to address human trafficking. For example, Namibia signed a comprehensive bill on Combating Trafficking in Persons, prosecuted traffickers, identified victims of trafficking, and referred victims to care. These advancements are a direct result of discussions and recommendations led by Namibia’s inter-ministerial National Coordinating Body (NCB). I congratulate you on these achievements.

It has been a year of impressive work, and more is on the horizon. I am excited about a number of local solutions already set in motion, including the government’s support for anti-trafficking activities in all of Namibia’s 14 regions. And I look forward to Cabinet’s review of the National Referral Mechanism in the near future, as well as to completion of implementing regulations for the new Combating Trafficking in Persons Act and application of the new TIP law to cases currently in the courts.

Of course, all governments can do more to combat trafficking in persons. The United States is no exception. This year’s Trafficking in Persons report highlights a number of areas where the United States should focus its own efforts, including increasing resources for victim services, using better screening protocols to identify victims, and enhancing prevention efforts to address all forms of human trafficking.

The Namibian government is to be congratulated for addressing human trafficking head on. As we commemorate the World Day against Trafficking in Persons, I offer the U.S. government’s continued partnership with Namibia to fight human trafficking. We all want to protect the most vulnerable victims, including children and young people.

Thank you for the opportunity to join you today, and thank you all for your continued work on this important issue.