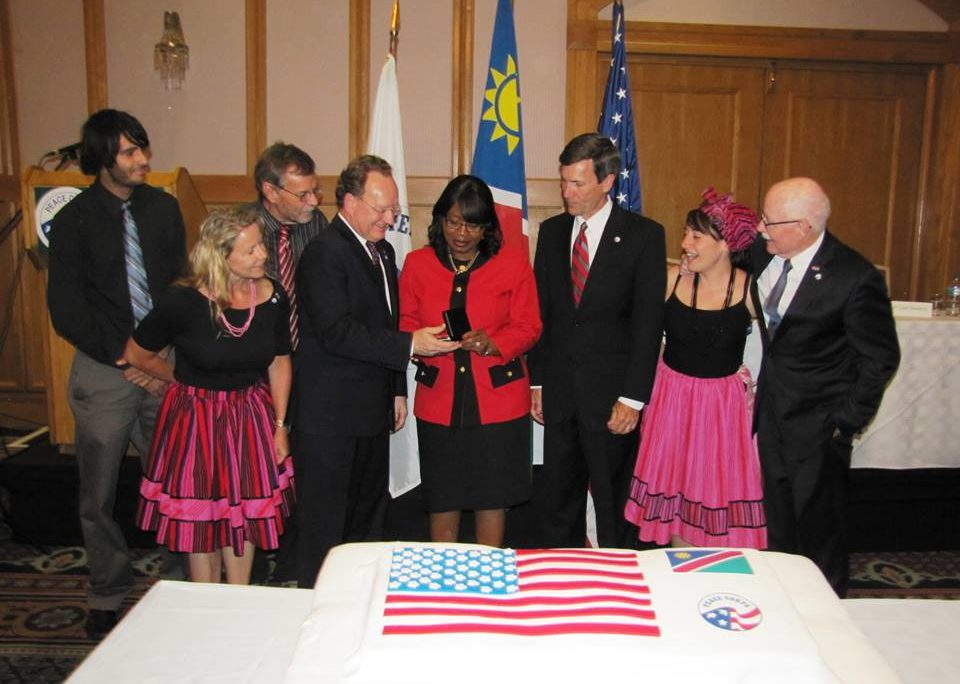 It is a great pleasure for me to be here today to congratulate the many American Peace Corps Volunteers and to thank the Namibian host families, colleagues, and government officials who have contributed to 25 years of a remarkably successful Peace Corps program in Namibia.  Happy 25th anniversary!

From the inception of the Peace Corps program here just a few months after independence in 1990 up through today, the Republic of Namibia has hosted 1,586 Peace Corps Volunteers from the United States.  Today, Namibia’s Peace Corps program stands apart from other countries’ in the consistently high level of cooperation and support it receives from its hosts – from the offices in Windhoek all the way to the villages at the farthest reaches of the country.

Currently, a total of 132 Peace Corps Volunteers are serving throughout this vast country, from Aus to Katima Mulilo.  I have had the opportunity to meet many of them here in Windhoek and in my travels around Namibia, and I’ve come to appreciate and admire their hard work and energetic commitment to service.

Dedication to service is the hallmark of a good Peace Corps Volunteer, and I can proudly say that we have 132 such Volunteers in Namibia – and in this room today.  We see that dedication in the teachers of English, math or science, like Kat Waldman serving in Olukonda village, in Oshikoto Region; and in community health workers like Davian Isom, working with the Okakarara community; and in our local enterprise advisors, like Scott Richmond, working with the communities (and wrestling with snakes) in Bwabwata National Park in Zambezi Region.  These volunteers and many, many others are showing the best face of the American people to their Namibian hosts, and they are making a difference every day in the lives of the people they work and live alongside.

Of course, our Peace Corps Volunteers are not alone.  Through a wide variety of programs, the United States of America supports and works with the Namibian government and the Namibian people.  Just two days ago, I was in Lüderitz to commemorate World AIDS Day with our partners from the Ministry of Health and Social Services and from civil society.  Working with them and many others, the United States is striving every day to help Namibia achieve an AIDS-free generation.

We also partner with many different Namibian government ministries and civil society organizations on programs covering a broad spectrum, from promoting youth entrepreneurship and improving access to justice to expanding Namibia’s markets and protecting its environment.  And we offer dozens of educational, professional and cultural exchange programs for Namibians visiting the United States, and for American scholars studying in Namibia.

But as important and far-reaching as these large, national-level efforts are, it is the many Peace Corps Volunteers serving in towns and villages throughout Namibia who represent the best that America has to offer, and who – if I can say it – have the greatest impact on ordinary Namibians.  Peace Corps Volunteers are often the closest tangible U.S. presence to a Namibian learner, farmer, healthcare worker, community leader, or small businesswoman.  For many Namibians, a Peace Corps Volunteer is the only American they will ever meet.

Peace Corps Volunteers also bring special skills to their work.  They learn local languages and develop a deep cultural appreciation for their sites.  They live alongside and at the living standard of the people with whom they work.

When they return to the United States, Peace Corps Volunteers take with them a unique perspective of Namibia – a grassroots perspective, a knowledge of the challenges and accomplishments of the families and individuals with whom they worked, and a love for the country rooted in the many human connections made over two years of service.

As I like to tell new Volunteers when they are going through their introductory training, while it may sound like a cliché, Peace Corps Volunteers are individual ambassadors for the United States.  Their steadfast commitment to improving people’s lives in their schools and communities of service increases the bonds of mutual understanding, friendship and partnership between our two nations.

In the last 25 years, more than 1,500 Peace Corps Volunteers have played that ambassadorial role, fulfilling that commitment to the people and to the development of this country.  Taken as a whole, the past Volunteers and those who are in this room today constitute the most resounding statement we can make about the enduring friendship and partnership of the Namibian and American people.  It’s a statement that I hope we will continue to make for many years to come.

Let me conclude by saying thank you, Namibia, for being such a welcoming host to Peace Corps for the last 25 years.  And congratulations Peace Corps!  I applaud your successes over the past quarter century.  Happy 25th anniversary!