Home Home | News & Events | U.S. Ambassador: Together, We Must Save Namibia’s Rhinos 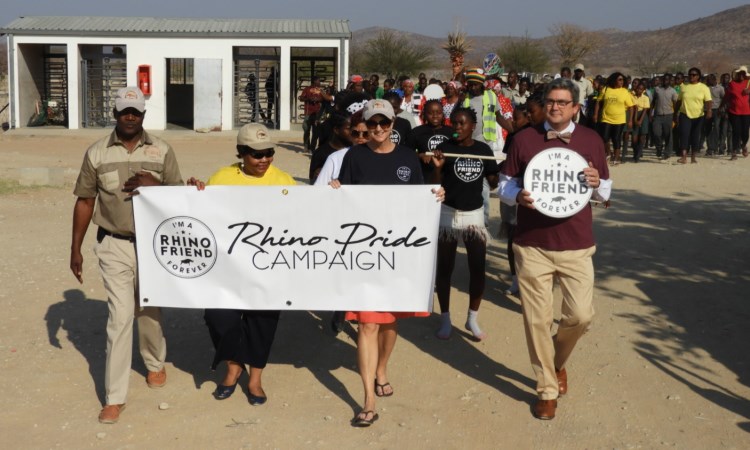 Khorixas – In celebration of World Rhino Day, U.S. Ambassador Lisa Johnson joined the Namibian Ministry of Environment and Tourism and the World Wildlife Fund to call for protection of Namibia’s rhinoceros population.  “Together, we must save Namibia’s rhinos from illegal poaching,” she said in Khorixas at a ceremony to mark Rhino Day, which occurs on September 22.

“Our hard work is paying off,” she said in her remarks at the World Rhino Day ceremony, which was hosted by the Namibia Nature Foundation and Save the Rhino Trust.  “Zero rhinos have been poached over the last two years in the northwestern communal areas of Kunene.”   Ambassador Johnson congratulated the Environment Ministry, the WWF, the Governor of Kunene, and their many partners for the achievement.  The Ambassador also specifically thanked Kunene community members who have served as game guards for more than ten years, calling their commitment to the rhino an example of outstanding conservation leadership.

The U.S. Agency for International Development (USAID) provides funding to the WWF through the Combating Wildlife Crime Project, which protects the black rhino population in northwest Namibia.  The project is a five-year initiative, begun in 2017, and partners with both the Namibian government and local communities.

Ambassador Johnson described in her remarks several rhino conservation projects in the Kunene Region sponsored by the U.S. government., including through the U.S. Fish and Wildlife Service and the Department of State’s Bureau of International Narcotics and Law Enforcement.

“We’ve shown that Namibia’s rhinos can be saved through a collective effort by our governments, communities, and partners in conservation,” Ambassador Johnson said.  “On World Rhino Day, I want to reaffirm to all Namibians the United States’ commitment to your precious wildlife.