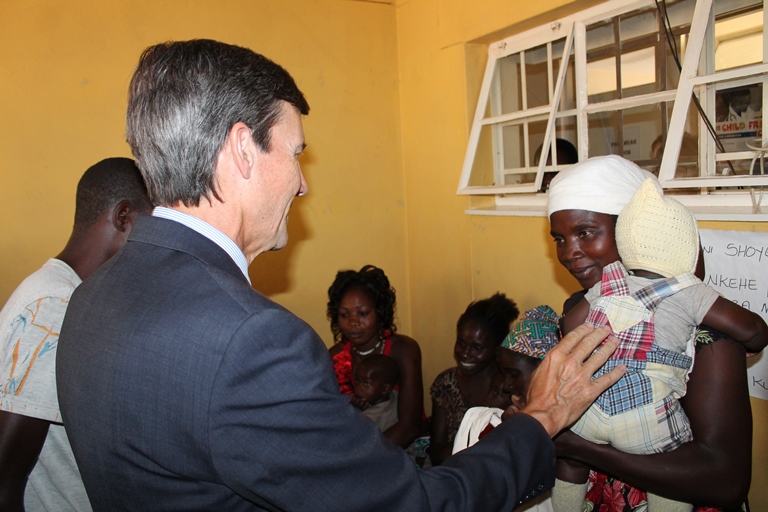 U.S. Ambassador Thomas Daughton engages with mothers and their babies during his visit to Nyangana. These mothers are beneficiaries of the Early Infant Diagnosis program.

Windhoek- U.S. Ambassador Thomas Daughton traveled to the Kavango East region to join mothers and their babies celebrating the achievement of preventing HIV transmission from mother-to-child thanks to the Ministry of Health and Social Services’ Early Infant Diagnosis program (EID).

The EID program implements early postnatal HIV testing of children as early as 48 hours after birth from HIV positive mothers. The Nyangana Catholic Hospital has introduced a standard operation procedure that has managed to track, test, and follow up 94.8 percent of HIV babies.

This noble effort is supported by the United States Government with funding from the U.S. President’s Emergency Plan for AIDS Relief (PEPFAR) through the U.S. Agency for International Development (USAID).

Ambassador Daughton highlighted the successful implementation of the program by the Ministry of Health and Social Services and its implementing partner IntraHealth – a non-profit organization dedicated to improving public health in developing countries.  “This is a huge success. All of us here have one goal in common: we want to end the HIV epidemic. And to achieve that, new infections among children must be eliminated,” explained Ambassador Daughton to community members and health officials at the event at Nyangana Catholic Hospital.

HIV can pass from mother to child during pregnancy, childbirth, and breastfeeding, but when effective medication is taken, the risk of transmission is prevented. This ensures that children are born and remain HIV-negative, even when an HIV-positive mother is breastfeeding her HIV-negative baby.

At the milestone event, Kavango East Governor Samuel Mbambo likened the fight against HIV/AIDS to Namibia’s struggle for independence. He described the disease as the enemy of all Namibians, calling it a killer that attacks without care whether its victims are mothers, fathers, or children. Governor Mbabmo expressed the need to integrate EID as part of a comprehensive HIV care package that should include immunization, growth monitoring, nutritional counselling, and prevention for infections to improve overall child survival. “Tracking these babies reduces the percentage of those lost to follow up treatment and also avoids development of new postpartum infections,” he stated.

Since 2004, thanks to several programs addressing mother-to-child transmission in Namibia, including the USAID Technical Assistance Program (UTAP), the HIV infection rate in children born to HIV-positive mothers has dropped by over 90 percent, especially in the Nyangana area. Today, 19 out of 20 HIV-exposed babies are being tested and referred to treatment and care if needed.

Ambassador Daughton, however, cautioned health care workers and policy makers from relaxing their efforts in closing the gap between diagnosis and linkage of treatment, as Nyangana mothers still face challenges presented by the disease. “It is no secret that HIV-positive infants are at their highest risk to die within the first three months of their life. Therefore, every effort must be made to ensure that children of HIV-positive mothers are diagnosed quickly in order to immediately put them on treatment,” he stated.

Globally, an estimated 2.1 million children are living with HIV, 90 percent of whom are in the Sub-Saharan African countries, one of which is Namibia. An estimated 1,600 children are exposed to new HIV infections from their HIV positive mothers daily, according to USAID.