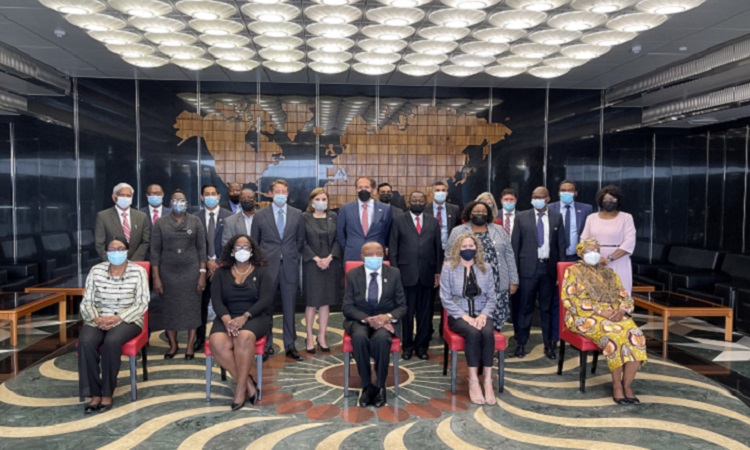 The U.S. delegations meets on March 1 with the Vice President.

Windhoek – A U.S. business delegation wrapped up today a visit to Namibia during which they met with Namibian Vice President His Excellency Nangolo Mbumba, other government leaders, and Namibian businesses.  The two-days of senior-level meetings introduced the U.S. firms to decision makers, potential partners, and future opportunities in the construction, energy, and health industries.

The delegation of over a dozen U.S. business representatives was the largest yet to come to Namibia and included U.S. companies:  BL Harbert; Black & Veach; Sun Africa; Fluor; and business groups from General Electric that focus on power, healthcare, and renewables.

The United States’ lead diplomat for U.S. economic policy in Africa, Ms. Akunna Cook, brought the delegation on her visit to Namibia in order to strengthen business, trade, and investment relationships between the countries.  That relationship has grown substantially in the recent past, notably as Namibia began exporting beef, charcoal, and other products to the United States.

“There is tremendous potential in Namibia’s people and in its economy, especially in renewable energies,” said Ms. Akunna Cook.  “We’ve heard the Namibian government’s interest in more engagement with U.S. firms, which led to this delegation’s visit to Namibia.  American companies offer the world’s best products and services, create jobs, transfer skills to employees, and value transparency and equity.”

In addition to the Vice President, the delegation also met with the Prime Minister, the Deputy Prime Minister and Minister of Foreign Affairs, Ministers of Health, and Trade Industrialization and SME Development, the Ministries of Finance and of Mines and Energy, the President’s Special Economic Advisor and Green Hydrogen Commissioner, the NIPDB, and NamPower.

Namibia is the last stop on Ms. Akunna Cook’s current visit to Africa, which also included Kenya, Nigeria, and South Africa.  The goal of her trip is to lead a United States’ whole-of-government effort to build trade and investment ties to Africa through an initiative called Prosper Africa.  As part of this whole-of-government approach, Ms. Cook’s delegation to Namibia included representatives from the U.S. Department of Commerce and Power Africa, as well as the American Chamber of Commerce in South Africa.

While in Namibia, Ms. Akunna Cook also introduced Namibian entrepreneurs to investment opportunities and resources to scale up businesses and exports.  On Monday, Ms. Cook and Prosper Africa hosted a virtual Twitter Space event connecting entrepreneurs in Namibia and across Africa to major American entrepreneurship investors, including Google.

On Tuesday, Ms. Cook and U.S. Embassy Chargé d’Affaires Jessica Long hosted a networking event to link Namibian entrepreneurs to the United States government’s TradeHub.  The TradeHub works with businesses in Namibia to scale up and begin exporting to South Africa and the United States.  Several Namibian companies and entrepreneurs have already begun exporting through the TradeHub’s support.