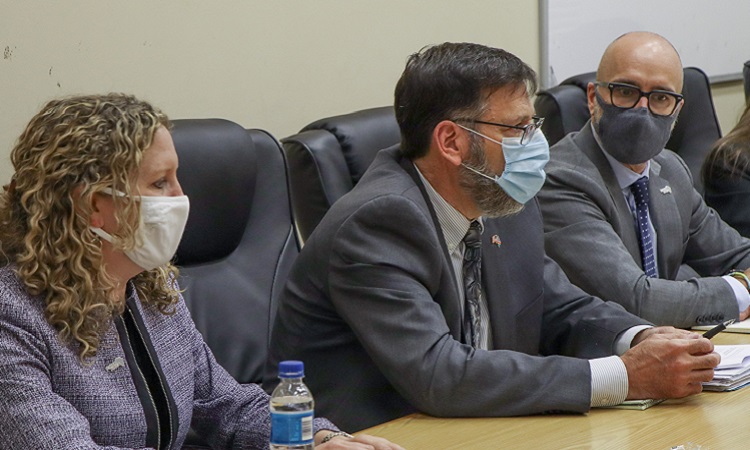 The delegation is led by Deputy Special Envoy for Climate (Deputy SEC) Jonathan Pershing, who reports to John Kerry, the first-ever Special Presidential Envoy for Climate and the first-ever Principal dedicated to climate change to sit on the U.S. National Security Council. Pershing and a delegation of five other officials, including Power Africa Coordinator Mark Carrato, arrived in Namibia on Thursday during a visit to the region.

In meetings with Namibian officials, the delegation had wide-ranging conversations on climate change and clean energy that explored how both countries can work together in anticipating and addressing climate impacts, building resilience, scaling up development of clean energy, and raising global climate ambition ahead of the United Nations climate change conference in Glasgow this November.

“Bold action to tackle the climate crisis is more urgent than ever,” Deputy SEC Jonathan Pershing said. “Transitioning to a net-zero economy is also the greatest economic opportunity of our lifetimes – it will speed our recovery, produce good jobs, and create entire new industries. The United States understands that we need to mobilize more finance and support for adaptation. We have pledged to double U.S. climate support for developing countries by 2024, and triple adaptation finance.”

The delegation also spoke with Namibian officials about the recently launched Mega Solar initiative and ways to expand a strong partnership with the Namibian government on clean energy and low-emissions development in Africa. The Mega Solar partnership between the Governments of Namibia and Botswana, Power Africa, the African Development Bank, the World Bank International Bank of Reconstruction and Development, the International Finance Corporation, and African Union Development Agency (AUDA-NEPAD) is expected to generate up to five gigawatts of solar power. Mega Solar could transform Namibia and Botswana into two of the globe’s most significant producers of solar power, enough to begin exporting renewable energy to the southern Africa region and making a significant contribution to global efforts on climate change.

Mark Carrato, Power Africa’s Coordinator, said, “the Mega Solar partnership demonstrates unprecedented leadership and collaboration and has the extraordinary development potential for life and globe changing clean energy emanating from southern Africa. We wanted to hear directly from our Namibian partners about moving this opportunity from concept phase to action phase.”

While in Namibia, the delegation also engaged directly with civil society representatives on raising ambition to tackle the climate crisis, including advancing clean energy development.

Jonathan Pershing is one of two Deputy Special Envoy for Climate positions. Previously he served as Special Envoy for Climate Change at the U.S. Department of State and was the lead U.S. negotiator to the UN Framework Convention on Climate Change under the Obama Administration. Prior to that, he served as Deputy Special Envoy and as senior international climate advisor to the White House and Secretary of State. Pershing has also served as the Senior Climate Advisor to the U.S. Secretary of Energy. Additional previous experiences also include the Hewlett Foundation, World Resources Institute, and the International Energy Agency.

The climate and clean energy delegation also included Mark Carrato – Coordinator of Power Africa, which is the world’s largest partnership for development, with 170 public and private partners who have committed $56 billion to double access to electricity in sub-Saharan Africa. Other delegation members were U.S. government technical experts working on climate and clean energy policy and programs.