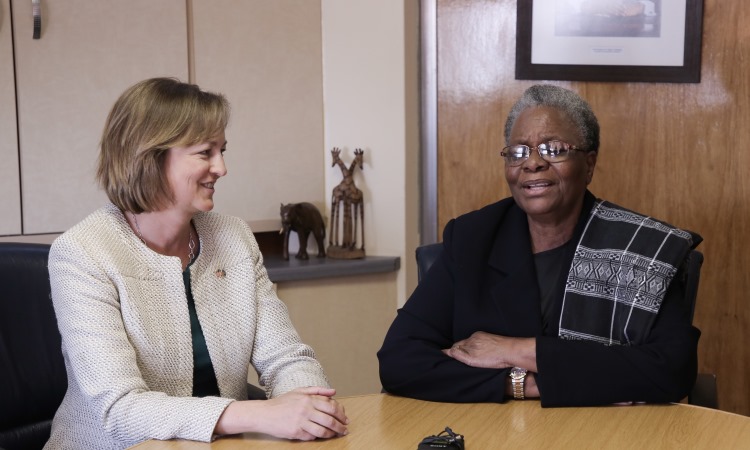 Windhoek – The U.S. Government is increasing its food assistance to Namibia through a US$1 million (N$15 million) contribution to the United Nations World Food Programme. This is in addition to the US$7.6 million in drought relief announced by U.S. Ambassador Lisa Johnson alongside His Excellency President Geingob in September, and the US$100,000 in water and hygiene assistance the United States had committed earlier in the year.

Yesterday’s announcement of the additional US$1 million by Ambassador Johnson followed her meeting with Deputy Prime Minister Nandi-Ndaitwah on Thursday, October 3, in the capital.

“As the U.S. Ambassador to Namibia, I have heard many people tell me about the difficulties caused by the drought.  In response, I have looked for every mechanism in the U.S. government to help. With today’s commitment of an additional US$1 million, I am very happy to say that the total U.S. commitment to food and drought assistance now equals US$ 8.7 million,” said Ambassador Johnson.

The additional US$1 million is funded by the United States Agency for International Development’s (USAID) Office of Food for Peace and will be implemented by the United Nations World Food Programme. The resources will provide approximately 1,300 metric tons of locally and regionally procured food commodities to more than 44,000 Namibians. The total US$8.7 million donation will help more than 150,000 vulnerable people in areas that are hardest hit by the drought.

Ambassador Johnson pointed out that U.S. agencies are working hard to get the food to the country and to the people in need as soon as possible. “The United States is here to help Namibia, as a friend and partner,” she said.