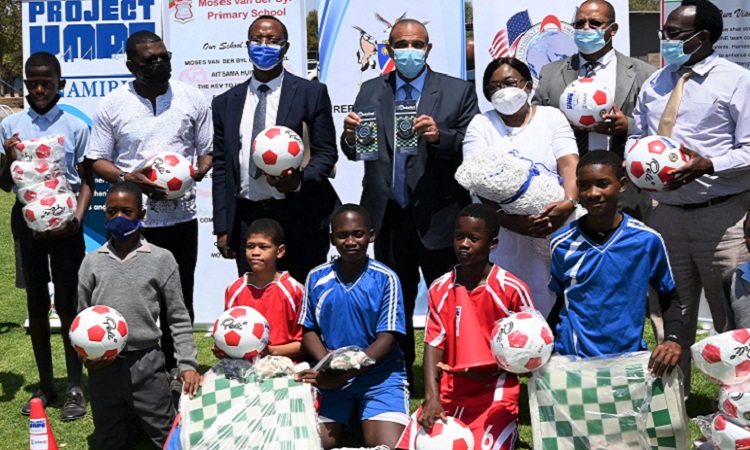 This is one of seven donations to six Regional Education Offices country-wide in support of a curriculum called “Coaching Boys into Men” that helps to prevent HIV infection, sexual violence, and early sexual debut among boys aged 9-14.

The program aims to positively influence how young men think and behave, both on and off the field. The curriculum, implemented by Project Hope Namibia, is funded by the President’s Emergency Plan for AIDS Relief (PEPFAR) through the United States Agency for International Development (USAID).

“USAID is proud to be part of ‘Coaching Boys Into Men’, an initiative that will reach over 7,200 boys in the next 12 months and will help prevent sexual violence, delay sexual debut, and prevent HIV.  The program is designed to help break the pattern of abuse in our communities and will result in a reduction of gender-based violence,” said Mark Anthony White, the Acting USAID Country Representative, who also joined the children testing the new soccer balls at the handover event.

Trained coaches and sports teachers will use the donated equipment in primary prevention program sessions.

Khomas Director of Education, Arts and Culture, Paulus Nghikembua, urged other organizations to follow the example of the project as part of their social responsibility.

Since 2013, the NARP project has been providing services to over 37,000 orphans and vulnerable children and their caregivers in 18 districts in the Kavango East, Kavango West, Khomas, Ohangwena, Omusati, Oshana, Oshikoto, and Zambezi regions.