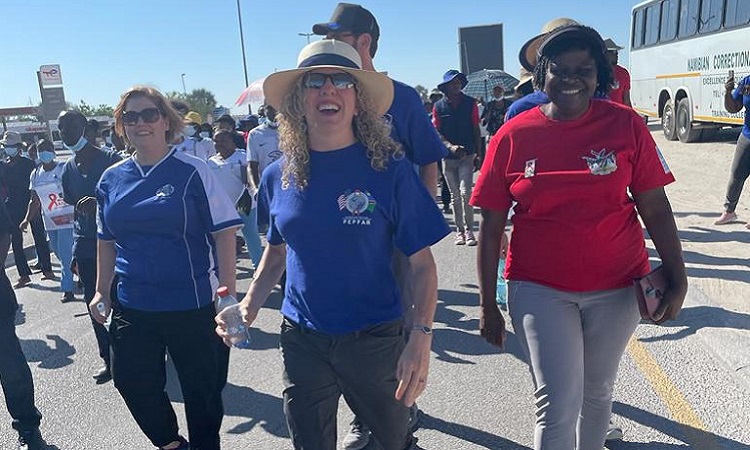 Windhoek – The United States government through the U.S President’s Emergency Plan for AIDS Relief (PEPFAR) reaffirms its commitment to fight against HIV/AIDS and remembers the millions of people who have died of AIDS. In Namibia, PEPFAR works closely with the Namibian government to advance the health of the Namibian people through HIV prevention, care, and treatment programming.

We are proud of the progress we have made through PEPFAR and our partner countries such as Namibia, and the millions of lives that have been saved. PEPFAR is working closely with partners to address health disparities among communities that continue to be left behind and have been disproportionately affected by multiple pandemics, which aligns with this year’s U.S. theme, “Putting Ourselves to the Test: Achieving Equity to End HIV.”

“With PEPFAR funding, we built on existing programs as well as introduced new and innovative approaches to address prevention, care, and treatment in the country all while working with the Namibian government. The U.S. government is committed to continuing collaboration with the Namibian government to erase barriers that prevent the provision of and access to equitable, inclusive, and accessible high quality HIV services and threaten the human rights of individuals including the LGBTQI+ community, sex workers, women and girls,” said U.S. Chargé d’Affaires, Jessica Long in her remarks at the World AIDS day commemoration in Ondangwa.

PEPFAR will continue working with partner countries such as Namibia and communities to ensure people of all ages, genders and population groups have equitable access to life saving HIV prevention and treatment services. As we celebrate how far we have come, we must continue our focus to close the gaps that remain and threaten the most vulnerable among us.

Namibia’s achievement in moving towards epidemic control of HIV is a testament to strong partnership, supported by the U.S Government as the primary partner in health through the Ministry of Health and Social Services. However, the threats to controlling the global HIV/AIDS pandemic are real and progress can be readily reversed. Ongoing support from PEFPAR is vital to ensuring that Namibia continues to control the epidemic and be a leader on the African continent.

Ahead of its 20th anniversary coming in 2023, PEPFAR is reinvigorating the U.S global HIV/AIDS response to achieve the shared vision of ending the HIV/AIDS pandemic by 2030, while sustainably strengthening health systems. To sustain its gains in the global fight against HIV/AIDS, PEPFAR is deeply committed to ending the inequalities and service gaps that still stand in the way of disenfranchised communities.

The U.S. Government has been working together with the Namibian government since 2005. This remains the largest commitment by one country to address a single disease. For the year 2022, the PEPFAR Namibia program received U.S.$ 94 million, equivalent to N$ 1.5 billion Namibian dollars to fight HIV in the country.