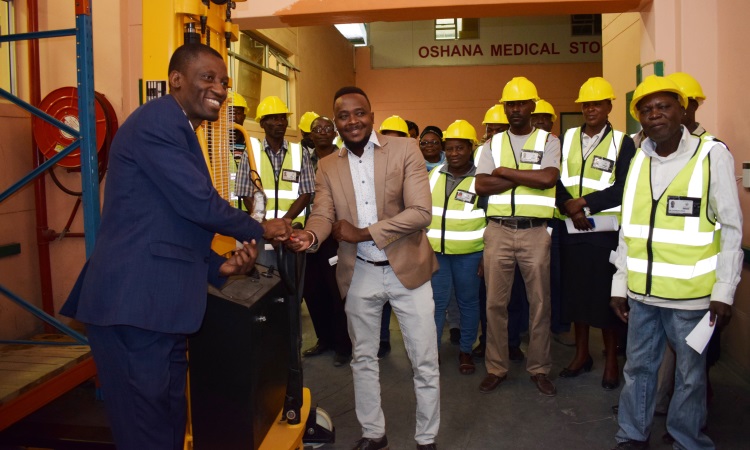 Oshakati – The United States Agency for International Development (USAID) handed over warehouse equipment valued at N$500,000 to the Multi-Regional Medical Depots of Oshakati and Rundu on 25 July 2019. Each warehouse received half of the equipment consisting of items such as semi-electric stackers, heavy-duty mobile platforms, and safety gear.

The items that are funded by the President’s Emergency Plan for AIDS Relief (PEPFAR) through USAID’s “Global Health Supply Chain Procurement and Supply Management Program” implemented by Chemonics International, were handed over at a ceremony at the Oshakati Medical Depot. The new equipment will enable effective and efficient storage and distribution management of antiretroviral medication, condoms, therapeutic food, and other pharmaceuticals.

USAID Country Representative, Dr. Randy Kolstad, in his remarks delivered by the organization’s Regional Advisor, Olavi Tauya, highlighted that the depot has also served as the countrywide hub for supplementary and therapeutic food, especially during times of drought. He further ensured that “the United States Government remains committed to supporting Namibia in its fight against the HIV epidemic, and thanks to the commendable cooperation with the Ministry of Health and Social Services, I am convinced that Namibia will soon be one of the first African countries to achieve epidemic control.”

The Oshakati Multi-Regional Medical Depot serves consumables and medicines to more than 80 public health facilities in the Oshana, Ohangwena, Oshikoto and Omusati regions, which are home to almost 100,000 people living with HIV (approximately 50% of the country’s patients on ART) while the Rundu Depot serves the Kavango East and West regions.

PEPFAR is the largest commitment ever by a single nation toward an international health initiative – a comprehensive approach to combating HIV/AIDS around the world.  In Namibia, PEPFAR is led by the U.S. Ambassador and programmed by an inter-agency management team that includes the United States Agency for International Development (USAID) and the Centers for Disease Control and Prevention (CDC).