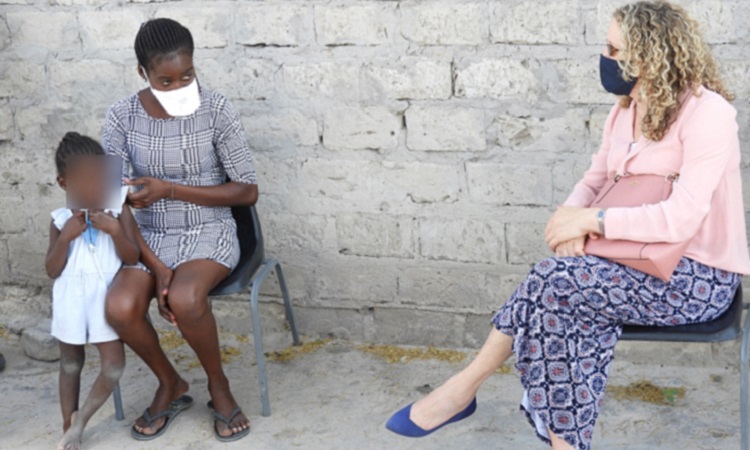 The U.S. Embassy’s Chargé d’Affaires Jessica Long (right), listens to the story of Christofina when visiting her home on the outskirts of Oshakati Town in northern Namibia. - Photo: Ralph Höfelein, USAID/Namibia

It is not a hot day, but the sun is striking a bright reflection from the white sandy soils of the village at the outskirts of Oshakati, a town in northern Namibia. Standing by her mother, almost leaning over her lap, is her little daughter. The girl’s feet are pale white from the dust she gathered while playing in the yard, her hair is neatly braided into a long ponytail, displaying the artistry of her mother’s fingers. She is playing with a pair of old scissors, keeping her big bright eyes intensely focused on the visitor to their home.

“I stopped in grade seven,” Christofina[1] says. She is responding to a question posed by Ms. Jessica Long, the Chargé d’Affaires, head of the U.S. Embassy to Namibia. The visit is part of a field trip to witness a U.S. Government-supported food assistance project funded by the U.S. President’s Emergency Fund for AIDS Relief (PEPFAR) and implemented by the U.S. Agency of International Development (USAID) together with local partners.

Christofina is in her early twenties and has two young children. She is one of several sex workers who benefit from a comprehensive HIV prevention and risk reduction program supported by USAID Namibia called “Key Populations – Strengthening Technical Assistance and Response” (KP-STAR).

Between April 2020 and March 2021, HIV prevention interventions that include clinical services such as HIV testing, HIV prophylaxis and antiretroviral therapy (ART) for those living with the virus, have reached close to 13,000 female sex workers.  The KP-STAR program also identifies children who are living with female sex workers and links them to psychosocial support, social welfare, and programs designed to improve their economic skills.

For now, Christofina is happy with the program and has tested negative for HIV, not once – but multiple times. Because she cannot negotiate for safe sex with all her clients, she has accepted to use oral HIV-pre-exposure prophylaxis (PrEP) to reduce her risk of contracting the virus. She has used the pill for four years now with no side effects except for giving Christofina total control of her own health. But finding enough money to feed her family is a daunting challenge. Her clients don’t pay up well. The COVID-19 pandemic has contributed to food insecurity of certain communities, affecting her and her clients. According to a government study, an estimated 360,000 Namibians faced severe acute food insecurity between April and September 2020.

Through trusted conversations with her friend who doubles as a caseworker, Christofina has revealed that she has two children. The caseworker visits her house to provide essential safe sex kits and to register her for a food assistance program that is supported by USAID. Christofina receives a food voucher that she can redeem for ten kilograms of maize meal, half a liter of cooking oil, and a tin of beans. The caseworker also helped to get Christofina’s children into another USAID-funded program for orphans and vulnerable children.

Christofina’s children have no documented father. She does not have her birth certificate. With the help of USAID-supported case managers, Christofina has been linked to the local headman to obtain a letter of recommendation for the Ministry of Home Affairs. With this letter she was able to retrieve a duplicate copy of her lost birth certificate, so she can register both children under her sole custody as a single mother and the kids can benefit from social grants. This assistance not only helps Christofina but changes the trajectory of the lives of her children.

In Namibia, USAID strongly believes in “people-level impact” and supports the Ministry of Health and Social Services to build a sustainable response to the HIV epidemic. The KP-STAR program runs from 2020 to 2025 and mitigates the impact of HIV among people who are at risk of contracting HIV.