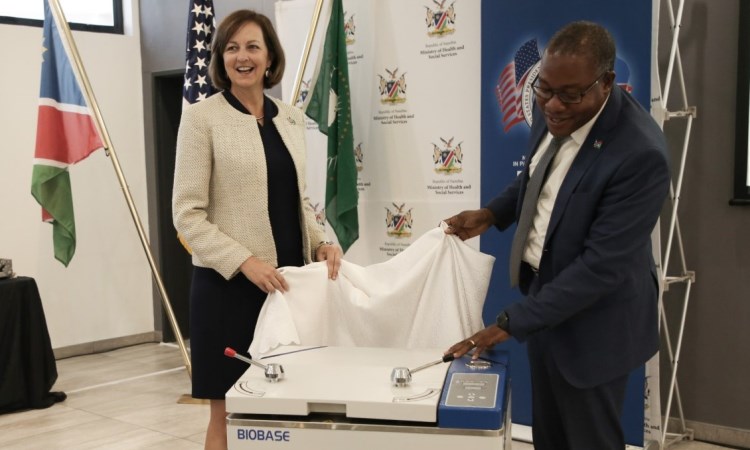 Ambassador Lisa Johnson handed over three (3) autoclave machines to sterilize reusable VMMC kits to the Executive Director, Ben Nangombe. Each machine is valued at US$6,000. SAFE VMMC will procure 10 additional autoclave machines in FY2020 to be distributed to public health facilities in 11 regions.

Windhoek – U.S. Ambassador Lisa Johnson launched the new PEPFAR-funded voluntary medical male circumcision (VMMC) program “SAFE VMMC” in Namibia.  The up to five-year, US$33.5 million program is led by USAID and the Ministry of Health and Social Services.  Through the VMMC program, implementer Abt Associates will expand voluntary medical male circumcision services to reach Namibian men across 11 regions.

“Circumcised men have a  60 percent lower risk of contracting HIV in comparison to non-circumcised men,” highlighted Ambassador Johnson regarding the importance of this intervention for Namibia’s fight against HIV/AIDS.

The U.S. Ambassador noted that voluntary circumcision is one of many ways to protect against HIV, and that “others include pre-exposure prophylaxis, or PrEP, and, of course, the use of condoms. Circumcision does not substitute for a condom, which still provides the best protection in every respect.”

Namibia is nearing HIV epidemic control as per the UNAIDS 95-95-95 goals: It is estimated that currently 94 percent of all HIV-positive Namibians know their status, 96 percent of those who know they are positive are on antiretroviral treatment, and of those on treatment, 95 percent have reduced the viral load in their blood to an undetectable level – which means it is impossible for them to transmit the virus.

The President’s Emergency Plan for AIDS Relief (PEPFAR) is the largest commitment ever by a single nation toward an international health initiative – a comprehensive approach to combating HIV/AIDS around the world.  In Namibia, PEPFAR is led by the U.S. Ambassador and programmed by an inter-agency management team that includes the United States Agency for International Development (USAID), the Centers for Disease Control and Prevention (CDC) and the U.S. Peace Corps